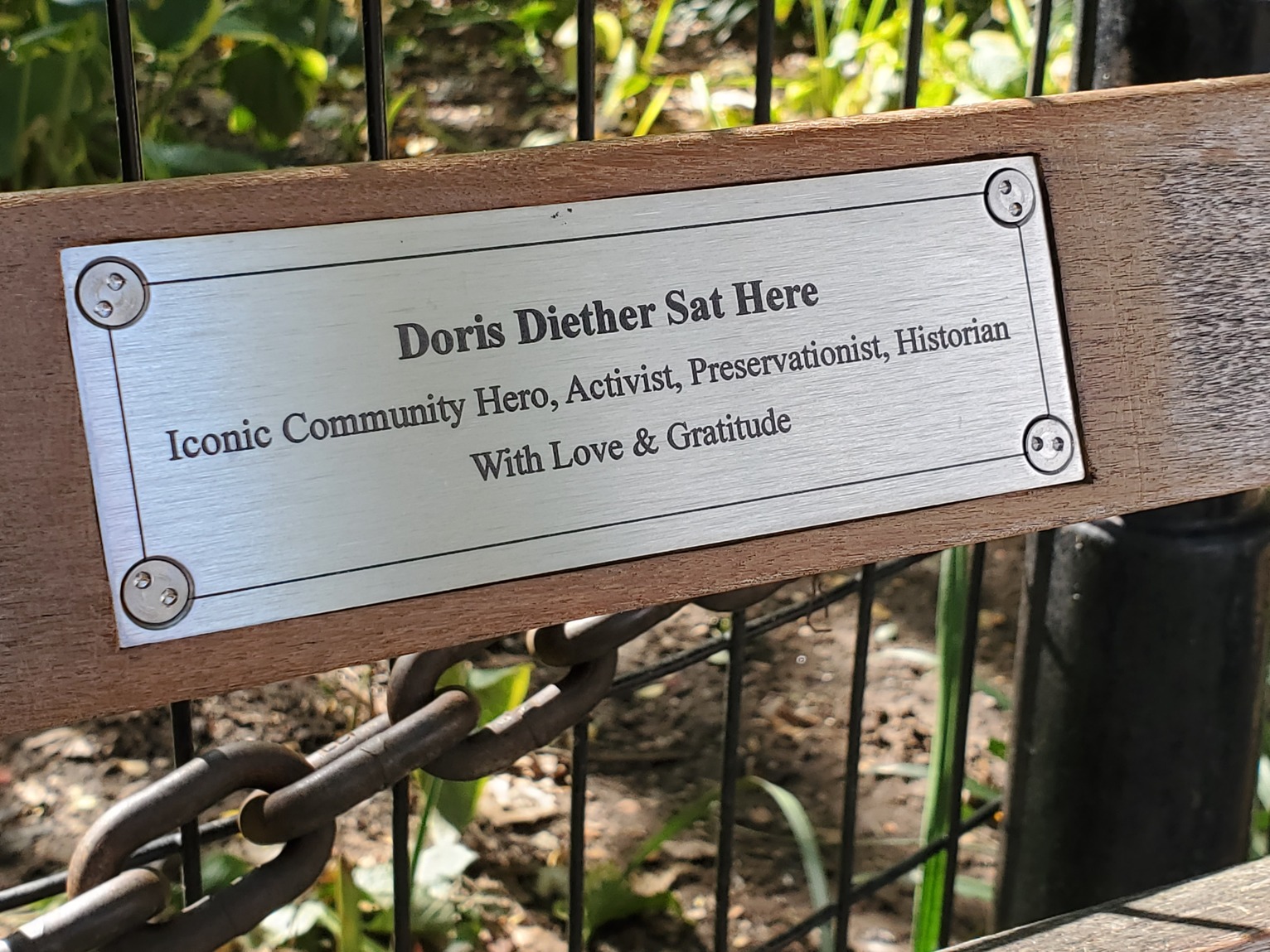 The bench is dedicated to the "community hero," (Photo by The Village Sun)

BY THE VILLAGE SUN | The plaque was small — but the love was large.

Friends of Doris Diether gathered in Washington Square Park on Sat., Oct. 15, to dedicate a bench to the late Greenwich Village activist and “zoning maven” of Community Board 2. Diether died last September at age 92 at her longtime Waverly Place home, just steps from her beloved park.

Fittingly, since Diether was good friends with the park’s musicians, there were songs sung in her honor, including versions of “Runaround Sue” and “Ain’t She Sweet” with special lyrics for the occasion.

The bench, in a spot where Diether liked to sit, is on the south side of the Alexander Lyman Holley monument oval on the park’s western side.

Before the ceremony, in the spirit of beautifying the park, there was an hour of flower-bulb planting, overseen by the Washington Square Park Conservancy.

Lois Rakoff, a C.B. 2 member and one of the organizers of the bench-naming effort, was the event’s emcee. She said she actually has even bigger ideas for ways to honor Diether, who was an ally of legendary Greenwich Village defender Jane Jacobs.

“It’s not over,” Rakoff declared, saying she would also love to see a Diether bust or statue in the park, plus a street co-naming sign hanging in her honor on Waverly Place.

“There is absolutely no female presence or monument in this park — and there should be,” she said, to applause.

Hoylman remembered the time Diether — who was renowned for constantly busting phone scammers — was positive she “had won the Publishers Clearing House” and called him over to be there when the check was delivered. It didn’t pan out.

“Doris’s lesson,” he said, “was that activism, no matter how small, matters.”

While Hoylman and most others at the event knew Diether for years, Marte, the new District 1 councilmember, only first met her recently, in 2016. He recalled the conversation at their first encounter, when Diether, looking up from her walker, gave him her trademark “side eye” and a piece of her mind.

“‘I hear you’re running for Council, right?'” he recalled her telling him. “‘I hope you clobber your opponent.'”

Marte didn’t win that race, yet he went on to prevail four years later in his second run for the Lower Manhattan seat.

“She always taught me to keep on fighting,” he said. “That’s her spirit that will live on in this community forever.”

Marte added that Diether, in her later years, sometimes would blow up on the Internet, like when a video of her holding a ball in the park went viral. He said those videos are now helping the “social media generation” come to appreciate her work.

“People are starting to learn about her track record,” he noted, “how she was a key figure in sustaining and preserving Washington Square Park.”

Jeannine Kiely, the current C.B. 2 chairperson, noted she personally joined the Greenwich Village-area board 10 years ago but that Diether served on it for an incredible 57 years.

“This woman was amazing and she was an inspiration,” Kiely said.

Richard “Richie” Weintraub, one of the “park jammers,” as he said they’re known, played guitar and sang a version “Runaround Sue” but with custom Doris lyrics he had penned for the occasion. Diether was “the queen of the park” he sang, who was always up to “play” and “party”… “She liked to travel around, yeah! Never puttin’ anyone down.”

Similarly, Sharon Woolums sang a version of “Ain’t She Sweet” with her own original lyrics. After Woolums, others, in turn, sang the tune with lines they had written.

Michah Bucey, an associate minister from Judson Memorial Church, on Washington Square South — where Diether attended services — gave a benediction. He asked everyone to just take in the moment and enjoy and sense the park that Diether so loved.

“Just listen to the sounds of nature,” he said. Then, he added of a raucous Peruvian political protest around the fountain, “And — just for good measure, as Doris would have it — listen to the protest.” Bucey concluded by leading everyone in a joyous shout of “Thank you, Doris!”

“Doris knew all the zoning rules,” she said. “She had the zoning book on her desk.”

Bob Holman, the founder of the Bowery Poetry Club, said the veteran activist had supported the place’s alcohol application at C.B. 2 — though not without giving him some advice.

“I loved Doris,” Holman said. “She helped the Bowery Poetry Club get a liquor license. She didn’t want it called ‘Poetry Club’ — she wanted it to be ‘Cafe’ or ‘School.’ … As far as I’m concerned, she was the queen of the scene.”