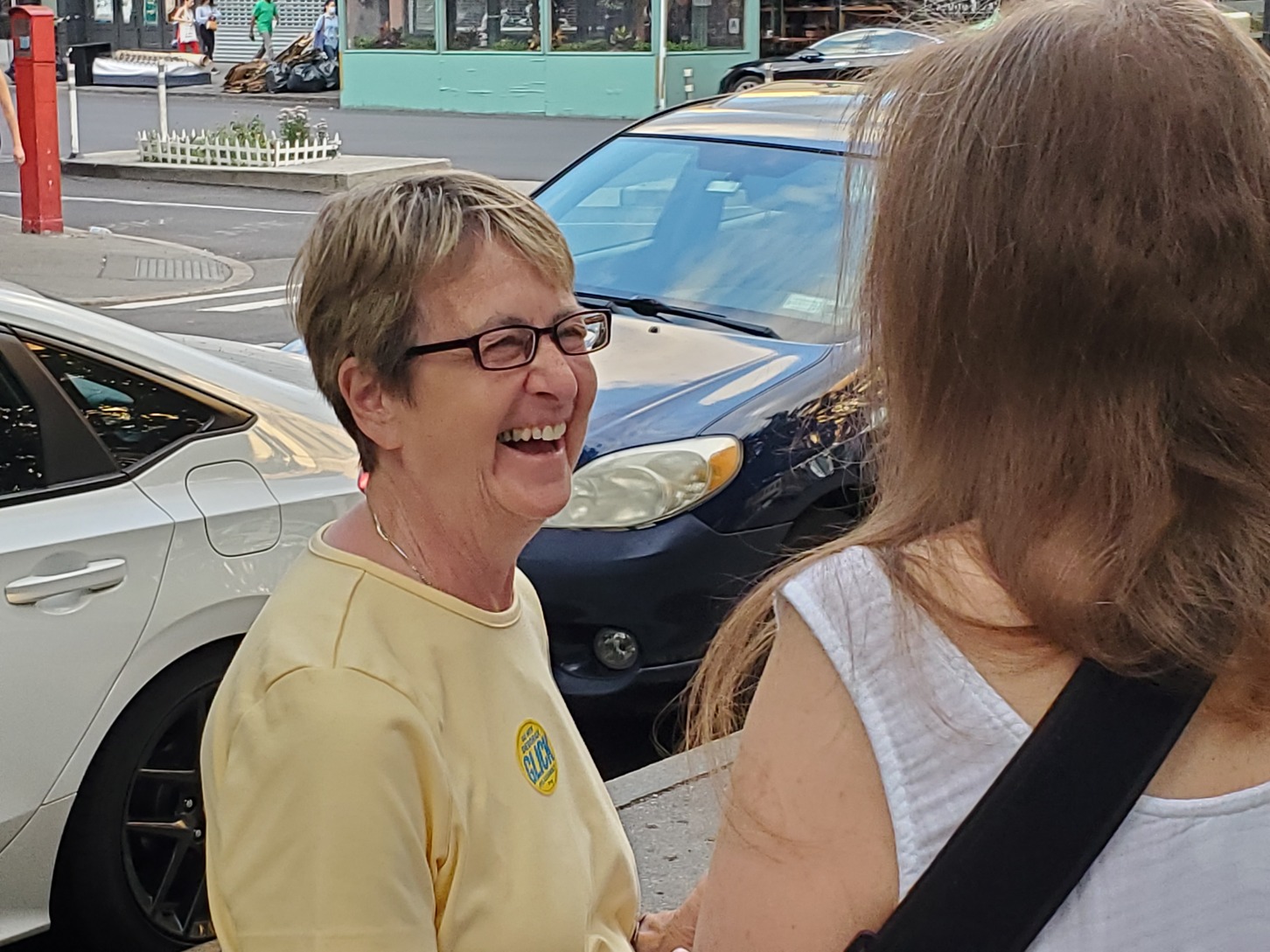 Assemblymember Deborah Glick speaking to a voter outside P.S. 41. (Photo by The Village Sun)

BY THE VILLAGE SUN | Updated June 30, 2:45 a.m.: There weren’t a lot of shockers in Downtown Manhattan on primary election night.

Meanwhile, in Lower Manhattan’s 65th Assembly District, in her second bid for the seat, campaign front-runner Grace Lee won handily with 46 percent of the vote versus three candidates. Illapa Sairitupac, a Democratic Socialists of America candidate, was the second-place finisher, with 33 percent of the vote. Trailing in third was Denny Salas, with 13 percent.

In the newly redistricted 61st A.D., which includes northern Staten Island, plus a part of the Financial District, Charles Fall held onto his seat versus Justine Cuccia, taking 67 percent of the tally.

Democratic State Committee races saw two local incumbents both beat back challenges. Jenny Low staved off a spirited run by Kathryn Freed, a former city councilmember and judge, in the 65th A.D., by a margin of 4,756 votes to 3,522 votes. Rachel Lavine did likewise versus Erin Hussein in the 66th A.D., winning more solidly, 7,695 votes to 2,883.

At the top of the ballot, Governor Kathy Hochul easily beat Public Advocate Jumaane Williams and Long Island Congressmember Tom Suozzi in her bid for election — not reelection since, as lieutenant governor, she replaced Andrew Cuomo after he resigned amid scandal last year. Hochul garnered two-thirds of the vote, with Williams coming in second with one-fifth of ballots cast.

Among Republicans, Congressmember Lee Zeldin, from Long Island’s East End, won the gubernatorial nomination in a race against Andrew Giuliani and two other G.O.P.’ers.

Around 7:30 p.m. on primary night, both Glick and Kessler could be found campaigning on the pavement outside P.S. 41 on W. 11th Street off of Sixth Avenue, a main poll site for the Greenwich Village area. They both were standing the required distance of at least 100 feet from the site’s front door. Earlier on, Kessler’s mother reportedly had been there campaigning with him.

Glick, for her part, seemed unworried. The longtime incumbent was expected to win the race. The question was by how much? In the end, Kessler chalked up 29 percent — more than the typical “protest vote” — but not enough to make it close.

Rather than doing much of a hard sell, Glick was greeting and chatting with acquaintances, telling one woman, for example, she would be happy to hold her dog while the consituent voted. However, the voter noted that, this year, Glick would not have to hold the leash again, like last year, since this time the woman had gotten a permission letter to take her pooch into the polls.

Another voter talked with Glick about some issues she has with the Trader Joe’s in Chelsea. The Albany veteran even dispensed some health and diet advice to a guy who had arrived outside P.S. 41 after a visit to a cardiologist.

In a statement after winning, Glick said, “I’m gratified that the voters of the 66th Assembly District have returned me to office to continue my work in Albany and locally, to fight for reproductive rights, L.G.B.T.Q.+ rights, voting rights, climate justice and educational equity.

“While important issues have been raised during this campaign, this community deserves a positive public discourse, which I will always endeavor to provide. I look forward to getting back to our work for all constituents.”

“While I’m certainly disappointed by the outcome, I’m proud of running a campaign focused on how Downtown Manhattan must do more to address skyrocketing rents, car-dominated streets and unabated climate change,” he said. “We’re encouraged that after a five-month race, almost 4,000 of our neighbors voted for that vision of change — and the work to make it a reality will go on. Finally, we congratulate Assemblymember Glick on a hard-fought victory; the people of the 66th District are lucky to have representation so committed to serving them in Albany.”

Lee, who has run an especially active press campaign, promptly issued a statement declaring victory Tuesday night after the polls had closed.

“Together, we ran on our conviction that every New Yorker deserves a safe and affordable place to call home,” she said. “We had thousands of conversations with voters in Lower Manhattan about community safety and the cost of housing and environmental threats to our neighborhoods. We talked about how to fight anti-Asian hate.”

Referring to last week’s U.S. Supreme Court decision on abortion, Lee said, “State and local governments have to step up and do what the Supreme Court will not. … We have to strategically craft gun laws that will withstand constitutional muster and keep our communities safe. We have to make New York a bastion of abortion care by expanding affordable access to the people who live here and by opening our hearts and our resources to women from red states.”

Lee added, “I’m grateful to the Chinatown community for coming out and voting because representation matters and your voices count.”