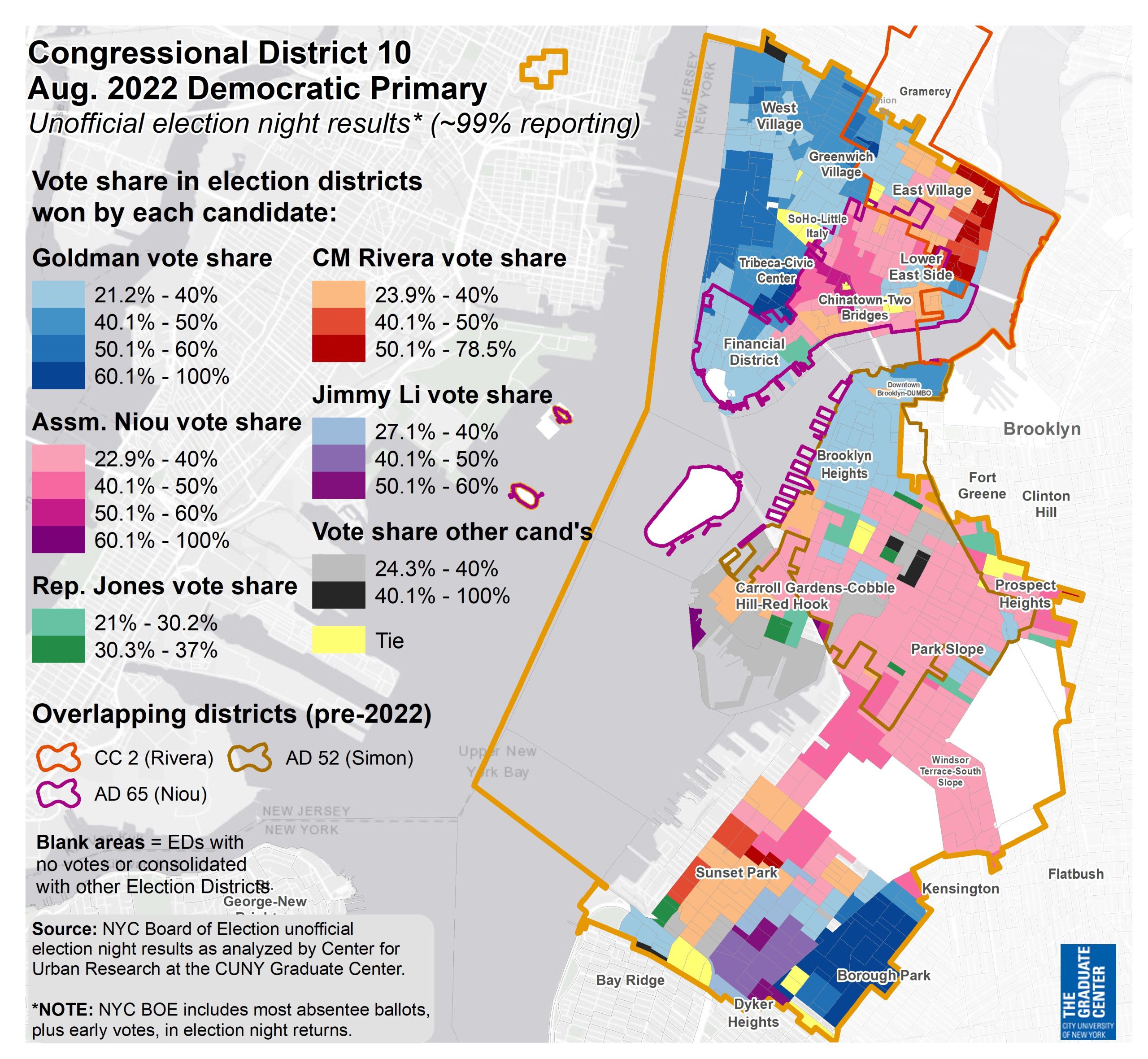 A map showing voter results in the Aug. 23 Democratic primary election for the 10th Congressional District. (Graduate Center at CUNY)

BY THE VILLAGE SUN | Those endorsements of Dan Goldman by the Village Independent Democrats club, state Senator Brad Hoylman and Assembly candidate Grace Lee are looking even more telling in light of the results of last week’s 10th Congressional District Democratic primary election.

As seen in maps of voter results for the Aug. 23 race compiled by the Graduate Center at the City University of New York, Goldman really romped in Greenwich Village, the far West Village, the Union Square area, much of Soho and Little Italy, Hudson Square and Tribeca — basically the entire Lower West Side of Manhattan.

Goldman also made some inroads into the western part of the East Village. He also did very well in the Grand Street area of the Lower East Side — which borders the part of East River Park that has been demolished for the East Side Coastal Resiliency project. He was endorsed by former Councilmember Kathryn Freed, who lives in the Grand Street co-ops and is a fierce critic of the resiliency plan.

But the candidate’s most crucial endorsement was from The New York Times.

In addition, in the Brooklyn part of the new District 10, Goldman, the House’s former Trump impeachment counsel, won big in Brooklyn Heights and DUMBO and crushed the competition in the Orthodox enclave of Borough Park.

What the CUNY maps also show is that voter turnout in some of the key areas Goldman won — such as Grand Street, Greenwich Village, Union Square and Brooklyn Heights — was comparatively high in what was generally a low-turnout race at a time when many New Yorkers are out of town on vacation. These were the areas where he really racked up the votes that helped put him over the top.

Assemblymember Yuh-Line Niou, who finished second in the primary, won most of her district, including the Lower East Side and Chinatown — but not the Financial District, which Goldman swept. She also did very well in the central park of the Brooklyn district, including ultra-progressive Park Slope, Carroll Gardens, Windor Terrace and Kensington.

As Democratic strategist Hank Sheinkopf has noted, the new District 10 was carved out to elect an Asian candidate to Congress; so that was working in Niou’s favor and likely also a factor in her strong showing. Sheinkopf added that Niou was the progressive candidate that the left, including the Working Families Party, chose to rally around.

Councilmember Carlina Rivera, who came in fourth, did her best among voters in her own East Side district in the New York City Housing Authority developments that stretch along the East River from E. 14th Street to the Williamsburg Bridge. She also did well in parts of Brooklyn, including Red Hook and the Hispanic part of Sunset Park, as well as Cobble Hill.

Congressmember Mondaire Jones, while not winning many electoral districts outright, did well throughout District 10, good enough to finish in third place over all in the Aug. 23 primary.

Another candidate, Jimmy Li dominated in the Asian portion of Sunset Park, but the overall turnout there was relatively low.