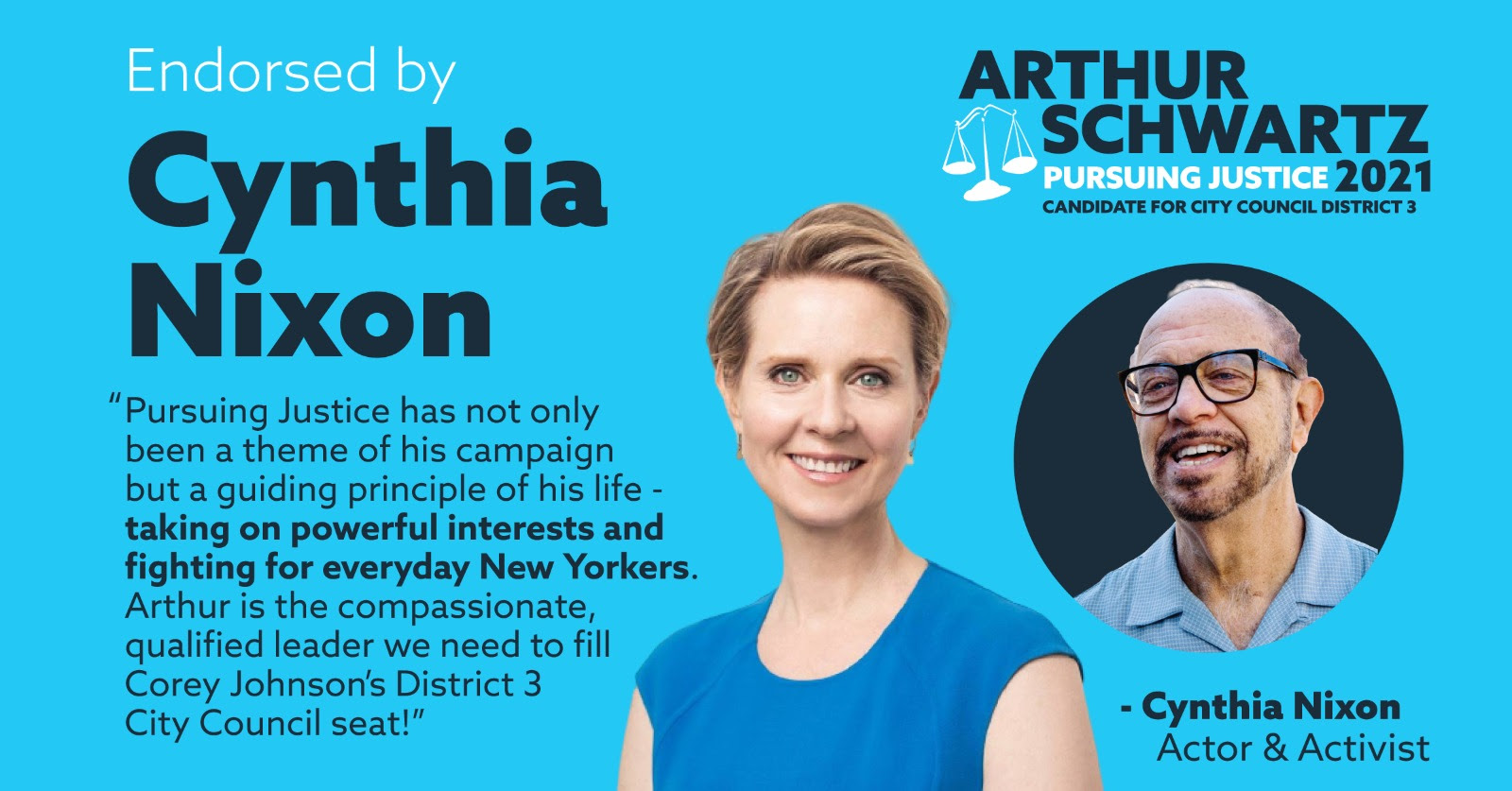 BY THE VILLAGE SUN | Arthur Schwartz has “Sex” appeal.

Cynthia Nixon, the “Sex and the City” actor and activist who ran for governor against Andrew Cuomo in 2018, has endorsed Arthur Schwartz for City Council in District 3.

“Arthur Schwartz is a New Yorker’s New Yorker,” said Nixon, who lives in Noho. “At the forefront of the progressive movement for five decades, Arthur is a tireless attorney who lends his voice and critical services to important labor, housing and many other progressive issues — more often than not pro bono. He never stops fighting for justice. As a district leader, Democratic Committee member and community leader for decades, Arthur is a champion for good schools, and also more green spaces and playgrounds for our neighborhoods.

“Pursuing justice has not only been a theme of his campaign but a guiding principle of his life — taking on powerful interests and fighting for everyday New Yorkers,” she said. “Arthur is the compassionate, qualified leader we need to fill Corey Johnson’s District 3 City Council seat!”

Three years ago, Schwartz was the campaign lawyer for Nixon, as well as for Jumaane Williams, who was then running for public advocate and Zephyr Teachout, who was vying for state attorney general.

“They ran sort of as a team,” the attorney noted.

“I am excited to win her support,” Schwartz said of getting Nixon’s nod. “She doesn’t give it easily. And I’m especially excited because she’s not only a leader among progressive Democrats but she’s a leader in the gay community; it’s great going into Pride Month.”

He said he expects Nixon will be out campaigning with him and that they will be joined by Tahanie Aboushi, who is running for Manhattan district attorney. Nixon and Schwartz have endorsed Aboushi but Aboushi has not endorsed Schwartz.

Meanwhile, the activist attorney is still doing his usual amount of legal work as the June 22 primary race enters its final month. Half of his work is for the transit union, the other half for his pro-bono causes, which right now involves helping tenants at Chelsea’s Robert Fulton Houses. Schwartz recently sued to get the New York Housing Authority to restore the gas at a Fulton Houses building on W. 19th St. and also has demanded NYCHA eradicate a rat problem on the grounds there.

“They turned the gas on but they haven’t done the rat remediation they’ve promised to do,” he said. “I’m holding [NYCHA Chairperson] Greg Russ in contempt. Go up there and you’ll see the size of these rats — as big as dogs.”

In a potentially far more consequential lawsuit involving NYCHA, Schwartz said that he’ll be announcing this week that he’s suing the Housing Authority over its RAD program, which he described as “the privatization program.”

Under RAD, the Fulton Houses and the nearby Chelsea-Elliott Houses would each get one new mixed-rate “infill” tower on their grounds. A contentious earlier plan to demolish two existing low-rise Fulton buildings has been scrapped. Also, the complexes would be switched from Section 9 funding to Section 8 — a voucher program — and put under the management control of a private entity.

Thanks to the expected federal funding in President Biden’s new bill, the American Jobs Plan, however, and specifically the strong hope that the bill’s allocation for public housing will be doubled, there might no longer be a need for RAD, according to Schwartz.

“Chuck Schumer told me, ‘Go for it,'” Schwartz said of his planned lawsuit.

“There’s $40 billion in there for public housing,” Schwartz said of Biden’s bill. “[Congressmember] Nydia Velazquez wants to add another $40 billion. If they get the $40 billion, they don’t need RAD.”

New York City would get the largest share of the public-housing cash.

“Half of the public housing in the country is NYCHA,” Schwartz noted. “People don’t realize that. Eight percent of New Yorkers [live in public housing].”

However, there is concern among some that NYCHA would just squander or sit on the windfall instead of using it to make needed repairs. As Schwartz said Schumer told him, “There would have to be controls.”