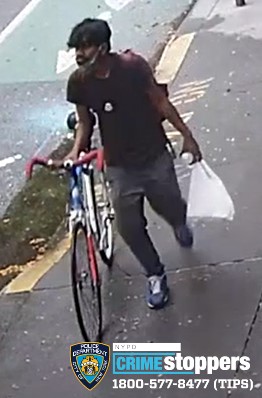 A surveillance-camera image of the alleged slashing suspect. (Courtesy N.Y.P.D.)

Police are still looking for a cyclist who they said slashed another man in Chelsea more than a month ago.

Things got physical and the stranger whipped out a “sharp instrument” and slashed the victim on the left arm, police said. The attacker then fled on a bicycle in an unknown direction.

E.M.S. medics responded and transported the victim to Lenox Hill Hospital in serious but stable condition.

The suspect is 20 to 30 years old, according to police.

Police provided surveillance photos taken from near the incident location, after the incident. Police did not say if the slasher was riding his bike or had it with him when he encountered the victim and the dispute occurred.