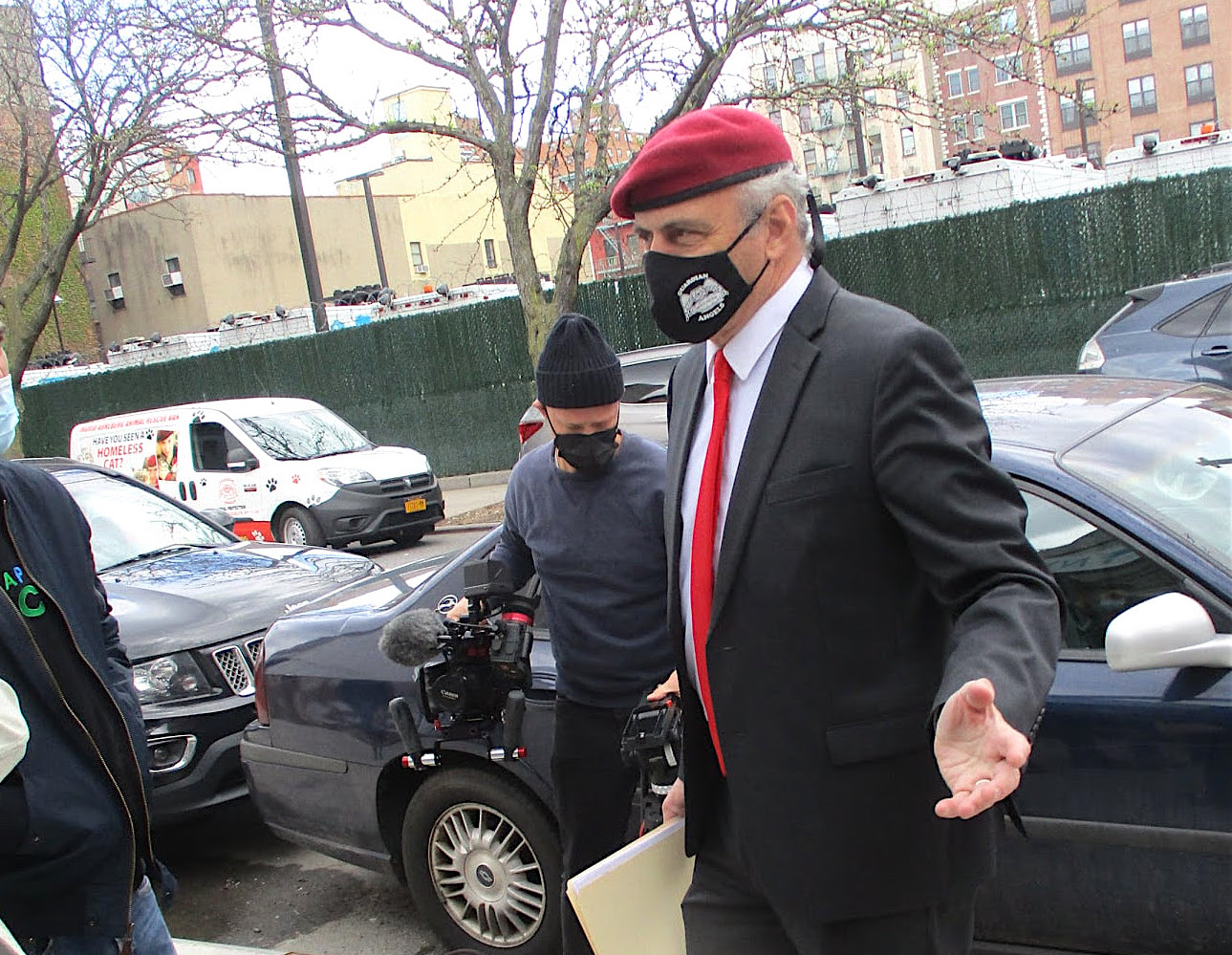 BY MARY REINHOLZ | Freshly minted Republican mayoral candidate Curtis Sliwa showed up last Sunday afternoon at a city-run Animal Care Center in East Harlem. He was protesting its “kill” policies, about two months from the primary election on June 22.

The longtime radio host and founder of the Guardian Angels is generally known for his controversial law and order rhetoric. However, he was accompanied by a small band of supporters also calling for an end to euthanizing dogs and cats, who are often “put to sleep” at shelters when they appear to have no prospects for adoption.

Sliwa, 67, has promoted the issue on his WABC radio program for several years, prodded by his fourth wife, Nancy Regula, an attorney and animal-rights advocate who joined him outside the locked A.C.C. facility. She carried a case containing one of the couple’s 13 rescue cats that lives with them in their Upper West Side studio. An A.C.C. staffer at the building at 136 E. 110th St. said earlier she was “not at liberty” to discuss the Sliwas’ campaign stop aimed at terminating her agency’s lethal city service.

Sliwa is on  a hiatus from his WABC show as he vies with his main Republican rival, Fernando Mateo, a Dominican-born businessman who advocates for bodegas and taxi drivers. Mateo, whom Sliwa has disparaged as a “de Blasio Republican,” did not return phone calls. Both contenders, who have never held previous elected office, clashed bitterly in the first televised Republican debate; they accused each other of illegal acts, with the excitable Mateo telling Sliwa, “I have enough dirt on you to cover your body 18 feet over.” Sliwa told him to calm down.

The Republican race for mayor narrowed down to these two men last week when financier Sara Tirschwell, the only woman, dropped out after failing to obtain enough eligible signatures on her ballot petition to the New York City Board of Elections. Tirschwell blamed Mateo and his allies for challenging the authenticity of the signatures on her petition and said she would vote for Sliwa, who called her exit a “sad day” for New  York.

Sliwa, a late entry, announced his run March 8 in a relatively small field of Republicans in a city where registered Democratic voters outnumber Republicans by seven to one. In Harlem outside A.C.C., he was conservatively garbed in a dark suit with a long Trumpian-style red tie and his matching signature red beret. Sliwa told The Village Sun that he is gathering at least 3,000 more signatures for a second petition to qualify as a candidate on an “Animal Welfare” party line, in addition to his status as a Republican and independent on the primary ballot.

His concern for abused and abandoned animals is a sharp departure from Sliwa’s more conventional calls for increased public safety and refunding for the New York Police Department. He described the plight of animals as similar to that of homeless people “except that [homeless people] don’t have an execution hanging over their heads. [Animals] are more likely to get sick and infected because this facility is not animal friendly,” he said of the Harlem shelter. “Euthansia is next door.”

Los Angeles has a no-kill policy for its shelters, Sliwa said.

“But New York, which prides itself on being a leader, doesn’t want to discuss it,” he charged. “Everybody should be able to adopt an animal. The city should subsidize it.”

As Sliwa spoke, several people held dogs on leashes while other supporters held signs bearing pronouncements like, “We Need No Kill Now! It’s Long Overdue” and “Make NYC a No Kill.” A red-and-white rescue van for homeless cats was parked across the street.

Joanne Sample, 60, from Queens, was among the protesters. She owns a dog and two cats and is gung-ho for Sliwa, saying she remembers him from the ’80s when his Guardian Angels patrolled the subways.

“Then I heard he was running for mayor and discussing animal rights. De Blasio isn’t doing anything for animals,” she said of the mayor. “And it’s not just de Blasio. The city is doing nothing,” she went on, claiming no action has been taken on  numerous animal-rights bills introduced in the City Council.

“I want animals to be adopted and treated humanely while they’re waiting to be adopted,” she continued. “You can’t just put an animal in a cage. Some have already been abused. You need time to find suitable places.”

Despite his name recognition and a popular cause, Sliwa is hardly a shoo-in to become New York City’s 110th mayor, succeeding term-limited Bill de Blasio, a progressive Democrat. It’s a job once unsuccessfully sought by his billionaire mogul boss, John Catsimatidis, who acquired the WABC morning radio station for $12.5 million in 2019 from Cumulus Media. Catsimatidis pondered another run  this year as a Democrat, stating that, even “Jesus Christ alone couldn’t win” as a Republican in a city dominated by Democrats in deep revolt against former G.O.P. President Donald Trump, a native son.

“Cats,” as he is known, eventually decided against changing party affiliations. He instead endorsed his employee Sliwa, even though the Manhattan Republican Club, which is run by his daughter Andrea Catsimatidis, endorsed Mateo.

“It’s a family feud,” Sliwa observed cheerily during an interview outside the A.C.C. Sliwa has also been endorsed by the Republican clubs in Brooklyn, where he grew up and once managed a McDonald’s, and in Staten Island, a Republican stronghold.

Sliwa recognizes that he is an underdog breed of political party animal but appears to believe he has a shot at the mayoral slot once the myriad Democrats in the race undergo an expected bloody process and settle on a primary candidate for the general election in the fall. He knows many of them and believes he can adjust his strategy as a well-known observer and  political gadfly.

“The Democrats are overwhelming but whoever thought George Pataki could beat Mario Cuomo?” he remarked. The little-known Pataki, then an Upstate Republican state senator, upset the late former Democratic governor in 1994 in Cuomo’s quest for a fourth term.

Asked about Trump, Sliwa said he had a “love/hate relationship” with the former president but did not vote for him, voting as an independent in both presidential elections, in 2016 and 2020.

As for former Republican Mayor Rudy Giuliani, Trump’s former lawyer vaunted as “America’s mayor” after 9/11, Sliwa said that Giuliani’s early ideas about “quality of life” issues” in 1992 and 1993 were still applicable in COVID-stricken New York.”

“You can’t say that because of Rudy and what happened with Trump in the aftermath of the election on January 6 makes his ideas as mayor not applicable, because they are,” he said. “Quality of life issues. You can’t throw the baby out with the bath water.”

Leftist civil-rights lawyer Ron Kuby jousted with former radio partner Sliwa over the years and was fired twice from the now-conservative WABC radio station. He recalls his old right-wing sidekick constantly talking about running for office as a way to bring attention to the show.

“He lives and breathes being on air,” Kuby said. “He spent his entire career attacking Democratic officials and maybe he decided he could do better with a mandate from the electorate. It’s a legitimate thing to do instead of constantly hectoring other people on what they should do,” Kuby mused to this reporter in a phone conversation from his Chelsea law office.

Kuby said that Sliwa “always liked animals,” noting that his current wife Nancy Regula is a “longtime rescue person. She and Curtis did a lot of commendable work helping to provide shelters for feral cats, making sure they had water and a place to go,” he said. “His arguing for proper funding of shelters and a no-kill policy are by far the most delightful aspects of his candidacy. They go dramatically downhill from there,” Kuby said with a laugh.

He doesn’t think Sliwa can win, but added that he is friends with him and has no animosity. However, he said, “I would be horrified if he becomes mayor.”

Correction: In the original version of this article, in the final sentence, Ron Kuby was quoted as saying he would be “delighted” if Curtis Sliwa was elected mayor. In fact, he said, he would be “horrified” if Sliwa was installed in Gracie Mansion. It is true, though, as stated in the second-to-last sentence, that Kuby said he is friends with Sliwa.