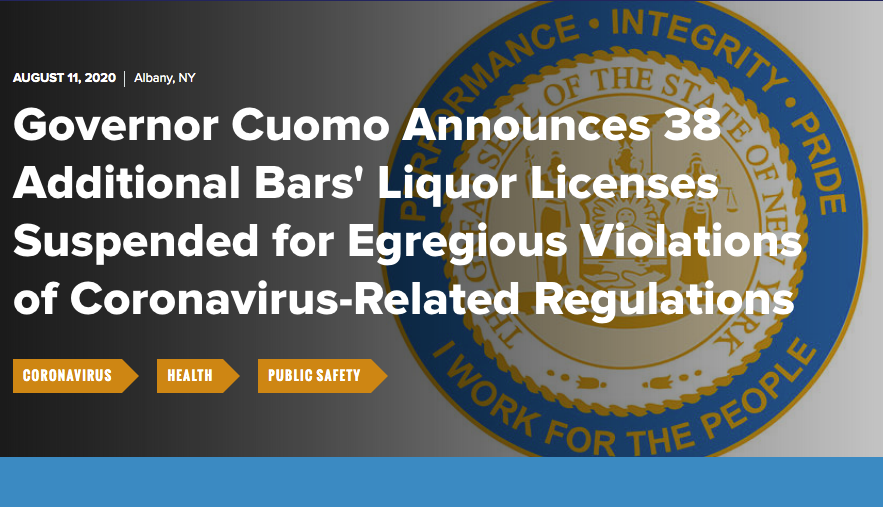 On Aug. 11, Governor Cuomo announced that more than three dozen more bars in New York City have had their licenses summarily suspended for COVID-19 safety violations.

BY THE VILLAGE SUN | Imagine Governor Cuomo doing that goofy “I’m watching you” two-finger gesture to East Village bars — because that’s exactly what he and his task force are doing.

On Aug. 11, Cuomo announced that the licenses of 38 more bars in New York City and Long Island had been suspended for “egregious violations” of COVID-19 safety rules. Manhattan led the pack with 12 suspensions — with the East Village and Lower East Side having the dubious distinction of racking up nearly half of them. Queens came in second with 10 suspensions.

“Thanks to New Yorkers’ hard work, we have achieved — and maintained — one of the lowest infection rates in the country, but now is not the time to let our guard down,” Cuomo said. “We will not allow a handful of bad actors or reckless businesses to halt or reverse New York’s progress. This is about enforcement, and while state investigators are working tirelessly to enforce compliance, local governments must step up and do their jobs.”

Vincent Bradley, the State Liquor Authority chairperson, said, “The task force has been hard at work to protect the public’s health and will continue to hold these establishments, who think they are above the law and immune to this pandemic, accountable for endangering the lives of New Yorkers.”

The Hairy Lemon, a sports bar at 28-30 Avenue B, had its license put on ice on Aug. 9. On Aug. 8, investigators with the state’s multiagency task force reportedly observed patrons standing and drinking without facial coverings outside the premises and confirmed that the location was “operating a bar-type service,” selling drinks to multiple patrons without substantial food.

On the Lower East Side, Las’ Lap, at 74 Orchard St., had its license suspended Aug. 8. The evening before, task force investigators said they observed about 25 patrons without face masks sitting, standing and kneeling around tables pushed together under a small tent, ignoring social-distancing guidelines. Inside the restaurant, investigators saw eight patrons — including two who were seated — eating and drinking, which has been illegal since March 16.

Also on Aug. 8, The Wayland, at 700 E. Ninth St., got nailed. The evening before, investigators said they observed at least 13 patrons without facial coverings standing outside the bar, congregating and mingling. Investigators also noted patrons being served drinks at an outdoor table without food.

Maiden Lane, at 162 Avenue B, felt Cuomo’s lash on Aug. 7. On Aug. 6, investigators reportedly spied the restaurant selling booze for on-premises consumption and “to go” with just a 0.5-ounce package of oyster crackers — in “flagrant violation” of state requirements that “substantial food” be served to limit mingling in bars. Investigators documented six customers being served at a walk-up bar at an outside window, around 17 patrons drinking on the premises with only oyster crackers, and another patron ordering two margaritas served with straws and no food, who then proceeded to walk across the street and get in a car.

Among the most egregious of the egregious violators was allegedly Cloister Cafe, at 238 E. Ninth St., whose license was summarily suspended on Aug. 7. Early that morning, the New York City Sheriff’s Office “requested assistance” from the state’s multiagency task force at this establishment around 12:30 a.m. — well past New York City’s 11 p.m. pandemic curfew for outdoor service for bars and restaurants.

Investigators reported they found the restaurant “operating as a nightclub and hookah lounge with a live DJ.” They documented numerous patrons ignoring social distancing, with lines of customers congregating in front of the premises without facial coverings, at least 20 patrons consuming alcohol indoors under a fixed roof, and no receipts for food purchases. The inspection further identified 33 significant fire- and life-safety violations, with the New York City Sheriff’s Office issuing seven criminal court summonses.

Meanwhile, Greenwich Village didn’t get off clean in this latest round of summary license suspensions. Spicy Moon Vegan Szechuan, at 68 W. Third St., got busted on Aug. 8. The night before, task force investigators said they had witnessed roughly 14 patrons inside the premises drinking, including two at the bar and four dancing. In addition, three employees were allegedly without facial coverings. Outside, five patrons were standing and drinking without facial coverings, according to the report.

The emergency suspensions were ordered by S.L.A. Chairperson Bradley and Commissioners Lily Fan and Greeley Ford at daily special meetings of the S.L.A. full board from Aug. 5 through Aug. 10.

Over the last week, the state’s multiagency task force — led by the State Police and S.L.A. — conducted 6,887 compliance checks, observing violations at 162 establishments.

Suspension orders are served immediately and remain in effect indefinitely, with the maximum penalty including permanent revocation of the license and fines of up to $10,000 per COVID-19 violation. Operators subject to an emergency suspension are entitled to an expedited hearing before an S.L.A. administrative law judge.