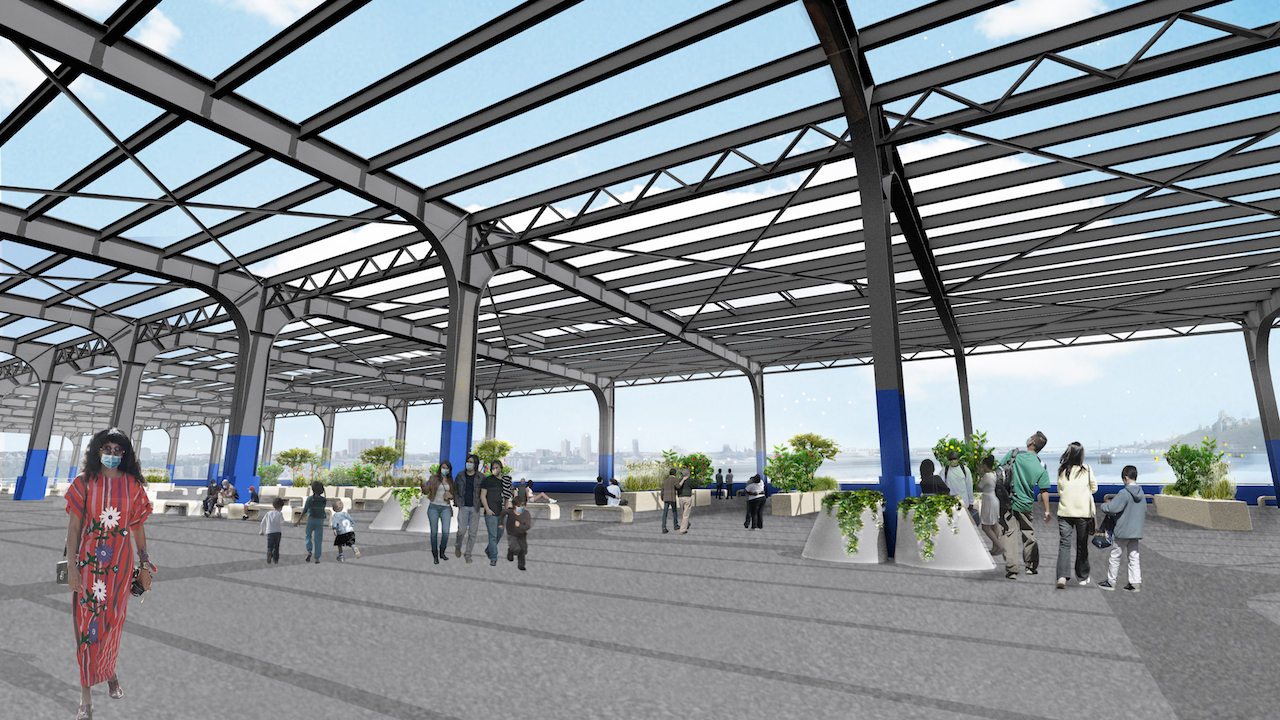 A rendering of what the interior of Pier 76 will look like under the interim-use plan. (Governor's Office)

Governor Cuomo on Wednesday announced that New York State has begun “phase one” of the transformation of Pier 76 into new recreational space that will be ready to open to the public by June 1.

The former site of a New York City Police Department tow pound, just west of the Javits Center at W. 36th St., will be renovated on an expedited schedule, preparing Pier 76 for its inclusion in Hudson River Park.

“COVID highlighted the importance of outdoor recreational spaces for New Yorkers, and it is critical that we expand open space as we continue to build back better,” Cuomo said. “After more than 20 years of inaction, the transformation of Pier 76 will convert a blight on Manhattan’s western shore into a crown jewel for the Hudson River Park and create a beloved urban recreational space that will be enjoyed by all for generations to come.”

New York State recently took possession of Pier 76 from New York City, which had used the 5.6-acre site and structure as an N.Y.P.D. tow pound. The state Office of Parks, Recreation and Historic Preservation has begun a partial demolition of the 245,000-square-foot facility at the pier and will create interim public recreation space to include a walking area and outdoor flexible space, as well as benches for people to relax and enjoy the waterfront views. Basically, it will pretty much be a completely open pier.

The tow pound’s steel support structure will be temporarily left intact, like a massive industrial trellis, “to create a unique setting and partial shade,” according to a press release from the governor.

The $20 million construction project, which also includes environmental abatement, repaving and installation of railings and lighting, is expected to be complete by June 1.

The 1998 Hudson River Park Act required the city to use its “best efforts” to relocate the two pound and transfer possession of the pier — at least half of which must be used for passive and active open space while the rest can be used commercially — but that transfer was never completed.

Planning for the long-term use of Pier 76 will be done by the Hudson River Park Trust, the joint city-state authority that is building and operating the waterfront park.

State Parks Commissioner Erik Kulleseid said, “Pier 76 is going to be a wonderful resource for residents of the Chelsea, Clinton and Midtown communities, who have been waiting patiently for this to happen. Pier 76 will join the other facilities of Hudson River Park as destinations for safe, healthy and family-friendly outdoor recreation, with spectacular urban and waterfront views.”

“New open space is a win for all the users of the Hudson River Park, especially during the COVID-19 pandemic,” said state Senator Brad Hoylman. “I’m glad to see the N.Y.P.D. finally move off of Pier 76 after more than two decades and look forward to working with Community Board 4, my colleagues in government, the Hudson River Park Trust and other local stakeholders in securing the long-term future of this pier for recreational and other important uses.”

Assemblymember Richard Gottfried said, “Governor Cuomo has ensured this project is finally being launched after many years of delay. I thank State Parks for plans to have this open to the public by this summer. Pier 76 will be an important addition to Hudson River Park, and I will be working with my constituents and the Hudson River Park Trust to develop a permanent vision of what this place can become for the community.“

Basil Seggos, the commissioner of the state Department of Environmental Conservation and chairperson of the Hudson River Park Trust’s board of directors, said Pier 76 will be a “world-class” addition to the park.

“The incredible transformation of Pier 76 from a city impound lot into a world-class recreational resource will provide an oasis on Manhattan’s West Side for those who call Chelsea, Clinton and Midtown home, as well as the millions of visitors drawn to the Hudson River Park each year,” Seggos said. “The much-anticipated addition of Pier 76 to the magnificent Hudson River Park will improve Manhattan’s western waterfront and connect countless New Yorkers to almost unlimited outdoor recreational opportunities on Manhattan’s spectacular riverfront.”

Connie Fisham, the executive director of the Hudson River Park Friends, said, “Friends is excited to see the old tow pound at Pier 76 finally coming down. … The local neighborhoods will love having this new recreational opportunity to take advantage of with such a high demand right now for all our parks and open spaces, and this community has waited a very long time for this to happen.”

Pier 76 will provide open space in a community where the population continues to grow. According to U.S. Census figures, the population of Manhattan Community Districts 4 and 5, which include Chelsea, Clinton and the adjoining Midtown business district, has increased by 27 percent since 2000 to more than 167,000 residents.

Open space for city residents has been critical during the COVID-19 pandemic as visits to state parks and trails near the metropolitan region have surged.

Hudson River Park is a 550-acre riverfront park and estuarine sanctuary that runs from the northern boundary of Battery Park City in Tribeca, through Greenwich Village, the Meatpacking District, Chelsea and Hudson Yards to W. 59 St. in Hell’s Kitchen/Clinton, and includes more than a dozen rehabilitated piers once used for commercial shipping. The park includes bicycle and pedestrian paths, tennis and soccer fields, batting cages, children’s playgrounds, a dog run and other features.

Visited by an estimated 17 million people each year, Hudson River Park is the largest open space in Manhattan since the completion of Central Park. About 45 percent of visits are generated from outside of Manhattan, with nearly one-third coming from non-state residents.