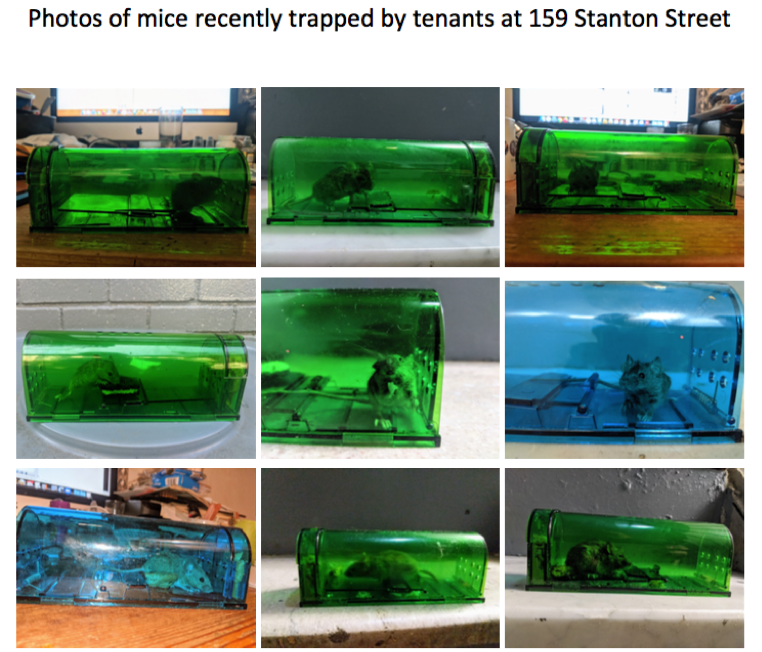 Tenants of a Steve Croman-owned Lower East Side building, 159 Stanton St., are heading back to court again. This will mark their third court case against Croman in slightly more than four years.

The issues they face, according to the 159 Stanton St. Tenants Association, include a massive rodent infestation and roach infestation, looming construction and long-term structural issues and prolonged intercom outages.

In 2017, Croman of Centennial Properties NY, formally known as 9300 Realty, was sentenced to one year in jail for crimes relating to his real estate dealings. But he was granted release after serving eight months of his sentence. Though an independent manager was assigned to manage Croman’s buildings and a court-appointed monitor was also assigned, tenants say they have seen some of the same troubling issues come back since Croman was freed from prison.

More than half of the apartments of 159 Stanton St., several of which were gutted, have been unoccupied for more than five years, which, the tenants say, “diminishes the sense of warmth and community in their homes.” The building currently has at least eight open Department of Housing Preservation and Development violations, many of which are for the pest infestation.

“I kid you not, I saw the first mouse on Lunar New Year’s Day of the Year of the Rat,” said Weiben Wang of the 159 Stanton St. Tenants Association, referring to last year. “But now that it’s the Year of the Ox, they keep on coming. I put out humane mouse traps, and released close to 40 mice back into the great outdoors. I have photos to prove it.”

“Living in a half-gutted building means constant fumes and dust, and an eerie emptiness that feels very unsafe,” said fellow tenant Francis Di Donato. “Especially after having intruders enter our apartment by smashing through the ceiling from an abandoned floor.”

“Steve Croman should be ashamed of himself — his track record shows that he just does not care about his properties or his tenants,” Councilmember Margaret Chin said. “This situation has only worsened for residents, despite multiple lawsuits. These violations are extremely serious and warrant immediate city intervention, especially in the instance of warehousing apartments during a recession and housing crisis.”

“Steve Croman and those responsible for the neglectful conditions at 159 Stanton St. must take steps to ensure a safe and livable environment for their tenants,” said Manhattan Borough President Gale Brewer. “It is always wrong when a landlord neglects their residential building, but it is truly unacceptable when so many working people are suffering as a result of the pandemic.”

Brian Kavanagh, whose district, like Chin’s, includes 159 Stanton St., is the chairperson of the state Senate Housing Committee.

“The reported conditions at 159 Stanton St. are a serious violation of our housing standards and I strongly support the tenants’ efforts to hold the landlord, Steve Croman, accountable,” Kavanagh said. “Mr. Croman and his company are notorious for the longstanding pattern of disrepair, neglect and harassment that we have witnessed again and again in his buildings. My staff and I are committed to working with the tenants and our colleagues in government to address all illegal and unsafe conditions in this building.”

“Since 2015, the tenants of 159 Stanton St. have experienced a litany of serious issues in their building,” he said. “Tenants should never have to live with this level of mismanagement, but it is even harder to imagine tenants dealing with all of this during COVID — a time when we are at home more than ever. Enough is enough — these tenants, and all tenants, deserve better!”