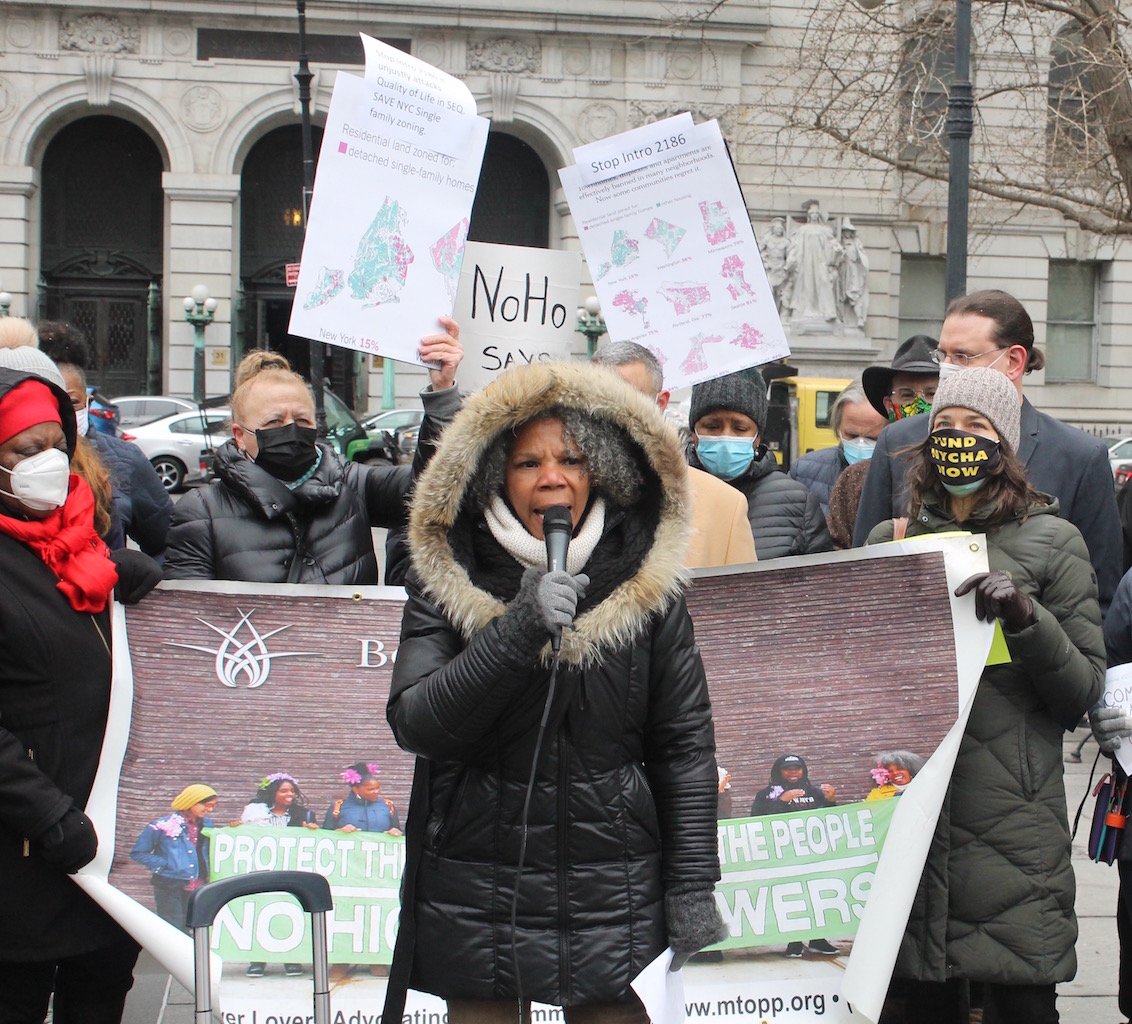 Alicia Boyd blasted Intro 2186 as "a displacement plan." (Photo by The Village Sun)

The temperature was freezing but passions were heated as speaker after speaker blasted the bill, Intro 2186, the City Council speaker and Mayor de Blasio at the press conference, organized by the Citywide People’s Land Use Alliance.

They derided the 10-year comprehensive planning initiative as “top-down” and “one-size-fits all.” They charged that it would cut the community out of the process and legally empower an unaccountable “director” to ram through district planning schemes — if necessary, over the objections of community boards and local councilmembers.

Most chilling to them was the fact that Intro 2186 would force mandatory upzonings every decade for every single community board in the city — in short, codifying an unstoppable development juggernaut.

Alicia Boyd of the Movement to Protect the People, which is fighting a development project that threatens the Brooklyn Botanic Garden, said the citywide plan is being spun as something that will help low-income black and brown people, when, in reality, it will mainly lead to an explosion of luxury development.

Sante Scardillo, a Little Italy resident since 1982, said the long-range planning bill would give too much power to developers — who already wield tremendous power, as it is.

“I have a lot of respect for CoJo,” Scardillo said, “but on this he’s just plain wrong.

“They have money, they have power,” he said of developers. “They can do plenty of damage already. They don’t need any help. … It’s about preserving our community.”

As he spoke, Scardillo gestured disdainfully toward the gleaming Frank Gehry tower, 8 Spruce St., with its “crinkled” steel facade, at 76 stories, one of the tallest residential buildings in the world.

“The ULURP process, as it is, is not good,” he said, referring to the city’s land-use review process. “But it’s better than the evil plan they want to impose on us.”

Village District Leader Arthur Schwartz ominously recalled when New York City had another “director” of planning, Robert Moses, whom author Robert Caro dubbed the “power broker.” During his long reign, Moses was considered the most powerful man in both the city and the state.

“Corey Johnson came out of the real estate industry,” Schwartz charged, adding, “He erased all that from the Internet.”

Schwartz is running to succeed the term-limited Johnson in District 3, facing, as he put it, Johnson’s “handpicked candidate,” referring to Erik Bottcher.

He drew a parallel with how the de Blasio administration scrapped the hard-fought community-based East River Park resiliency plan, abruptly swapping in a new, more draconian scheme that the community never got a chance to review.

“For years, the local community developed a [coastal resiliency] plan,” Schwartz said. Referring to City Hall’s sudden switcheroo, he said, “That’s the kind of planning, that’s the kind of approach that we have to say no to.”

Paul Graziano, a Queens native and planning consultant, has played a role in helping contextually rezone much of Queens to keep overdevelopment in check.

In short, Graziano said, rezonings make the “speculative value” of property go up.

The Mandatory Inclusionary Housing included in the rezonings is a “scam,” he said.

“M.I.H. has not worked,” he said, “because there is no deep affordability. And it’s set up as a real estate program.”

Graziano blasted Vicki Been, de Blasio’s deputy mayor of housing and economic development, calling her the engineer of the current upzonings. He said a report Been headed at New York University’s Furman Center for Real Estate and Urban Policy has been used “to justify upzonings for the last eight years.”

“Eighty percent of her data is wrong,” Graziano said. “You’ve got this administration running this phony agenda and you’ve got “Planning Together” looking to lock it in for 10 years. This horrendous bill…will lock it in.

“Planning Together” is a report, released in December, on which Intro 2186 was based.

What Intro 2186 would really do, Graziano warned, is to ensure that upstart councilmembers like Carlos Menchaca don’t throw a wrench into the city’s and developers’ plans. Menchaca famously killed a development plan in Industry City at the last minute over concerns that it would spur gentrification in the surrounding community of Sunset Park.

Typically, if a councilmember votes against a project located in his or her district, the rest of the Council defers and votes the same way. However, if Intro 2186 passes, then even if the full Council voted down all three comprehensive plan scenarios presented for a district, the all-powerful “director” could still pick one of them.

“This will take away member deference,” Graziano warned of the sweeping proposal. “It will cook and bake these upzonings every 10 years. It’s going to be a perpetual development machine.”

In a piece he wrote for the current issue of  Juniper Berry, a Queens community magazine, which was handed out at the rally, Graziano said of “Planning Together,” “The report is mainly built on a single fictitious pillar: that wealthy White neighborhoods have received preferential treatment in terms of planning and zoning while, according to the report, ‘For Black, indigenous and people of color, there are rarely if ever conversations about what people actually want to see in their neighborhoods.’

“This falsehood is repeated multiple times throughout the document, all in the name of ‘equality,’ which, in this document, relates to the removal — not enhancement — of  input from neighborhoods, stakeholders, community boards and elected officials during the land use process; and mandatory upzonings that would have to occur in each community board to generate tens of thousands of new housing units in the city every decade.”

And yet, the city’s 1961 Zoning Resolution has “overdevelopment potential built into” it, meaning the city already has the capacity to absorb millions of new residents, as it is, he said.

As Graziano put it, Johnson’s proposal “is built on a series of statements presented as facts which are not true and are, in fact, the opposite of the experience of community boards and communities throughout New York City.”

In fact, according to Graziano, the rezonings under Mayor Bloomberg “were, for the most part, extremely successful,” partly due to buy-in and sign-off from affected communities, including black and brown communities. Of the 34 rezonings in Queens under Bloomberg, for example, 12 were done in predominantly white neighborhoods and 18 in majority nonwhite neighborhoods, according to Graziano.

Austin Shafran, a candidate for City Council in District 19, in northeast Queens, said the name of “Planning Together” should be changed to “Tearing Apart.”

“This is not our plan,” he declared. “This is a plan for developers. We’re here to say no and we’re her to stop it. We will not be stripped of our development [oversight] powers.”

In an article previewing the March 16 press conference, Johnson told The Village Sun that his bill would allow communities to “proactively plan” their futures.

“Community boards and neighborhood residents across New York City do not have enough opportunity to plan proactively for what they want to see in their neighborhood, and that is exactly what comprehensive planning attempts to fix,” he said.

“Comprehensive planning would empower communities to plan the futures of their own neighborhoods rather than react to individual rezoning requests put forward by developers.”

Similarly, during a Feb. 23 Zoom City Council hearing on the proposal, Johnson vehemently disputed opponents’ assertions of what the bill would or would not do, making one wonder if the foes and Johnson were talking about the same piece of legislation.

However, speaking after the rally, Kirsten Theodos, one of the event’s organizers, told The Village Sun that it’s Johnson who is spinning things.

“I think it is Corey who is reading the wrong bill,” Theodos said. “Marissa Lago, the City Planning commissioner, said the ‘director’ has the power to pick a scenario if one is not chosen and Corey said that wasn’t true at the hearing and in your article. It certainly is true. Misunderstanding or lie?

“As for increasing community board involvement,” Theodos said, “the community boards were not invited to draft the legislation nor were they given a heads up that it was coming! I am sure you remember when Stephen Levin introduced the so-called “Commercial Rent Control Bill,” there was a media blitz on that bill before it was even written, a far cry from how Intro 2186 was delivered to the public.”

Similarly, in a follow-up e-mail, Graziano asserted that he is hardly misreading Intro 2186 and provided more of his expert analysis of it.

“This bill will upend all land-use processes in an extremely negative way,” he said. “ULURP, as we all know, is an imperfect system at best. However, should this pass, community boards and the public will lose — not gain, as the speaker insists — influence in the process.

“Every community board in the city will be expected to essentially ‘sacrifice’ portions of their areas to meet this mandate.

“In addition,” Graziano said, “the rollout of this report and bill was purposefully quiet; no community boards were sent copies of the report/bill nor were they given notification, and many are still unaware of what is going on, as is the general public.

“Finally, this bill cannot be ‘fixed’ through amendments, as has been suggested by several electeds and the author of the report and bill,” he added. “The central theory of the need for this bill — the report by Vicki Been from 2010 which criticizes the rezonings under Bloomberg, which only looks at 2003-2007 and uses a remarkably flawed methodology — is the same report that has driven the pretty awful rezoning (and half-failed) strategy and policies during the current administration. It is flawed beyond repair and should have never been introduced in the first place. The bill needs to be withdrawn, and the only way that’s going to happen is through overwhelming opposition from the community boards, electeds and the general public.”

However, a determined Johnson has made it clear he intends on passing Intro 2186. Theodos said she has heard the vote is expected in the coming months.

“Imagine if Corey showed this much tenacity to pass the Small Business Jobs Survival Act!” she said.