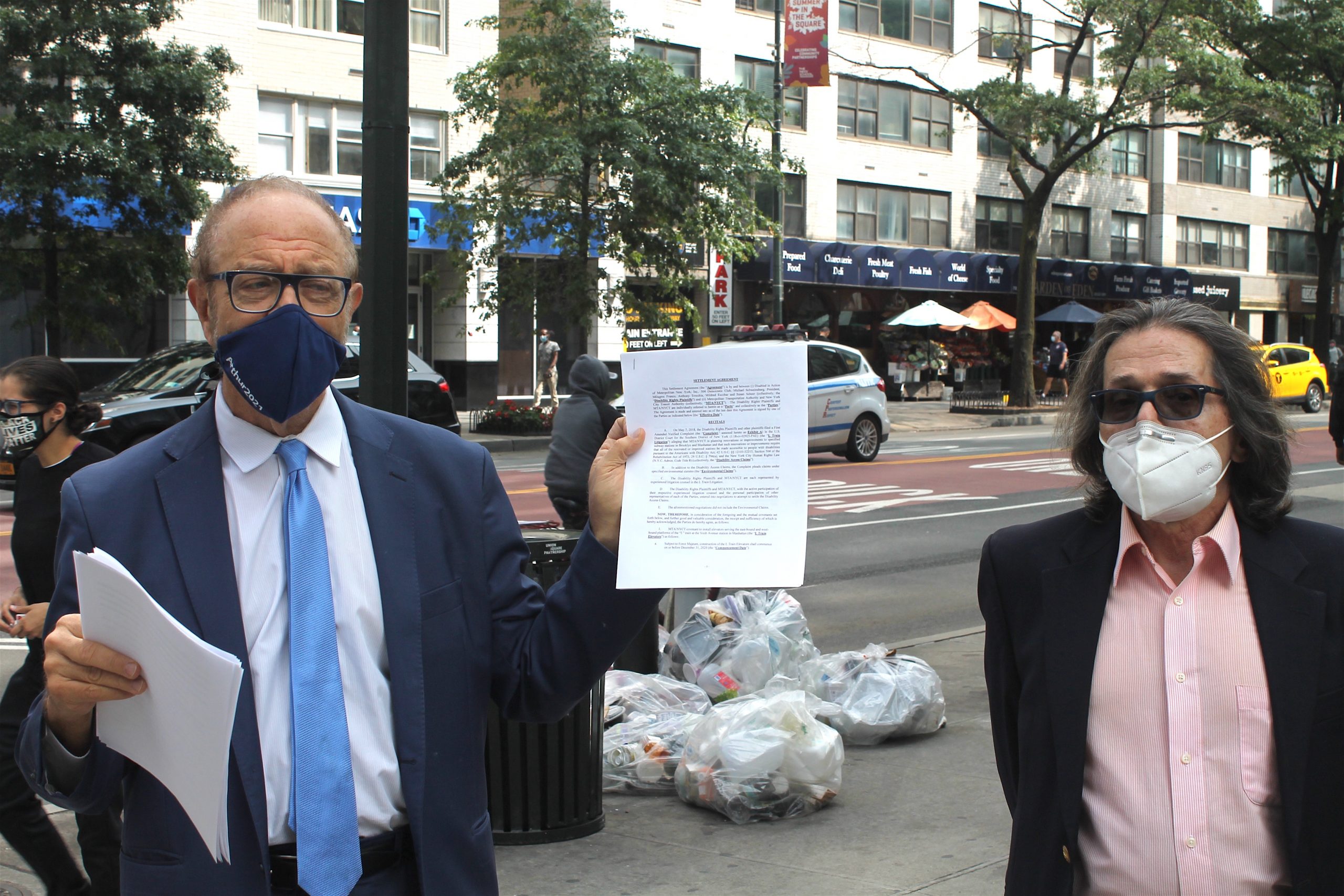 District Leader Arthur Schwartz held up a signed agreement with the M.T.A. to add elevators at the subway station at 14th St. and Sixth Ave. Michael Schweinsburg, of the 504 Democratic Club, is at right. (Photo by The Village Sun)

BY THE VILLAGE SUN | While Village attorney Arthur Schwartz is known for his lawsuit against the 14th St. busway, it’s not the only issue he has with the bus system.

Last week, Schwartz, who is running for the City Council District 3 seat, called for the Metropolitan Transportation Authority to make buses free again, just like they were during five months of the pandemic until the end of August.

He also demanded the restoration of a bus stop and shelter that were removed for Select Bus Service at the southeast corner of 14th St. and Fifth Ave.

And he called on the M.T.A. to fulfill its agreement to install handicap-accessible elevators for the F and L trains at 14th St. and Sixth Ave.

Schwartz, who is a Democratic district leader, was joined by disabled advocate Michael Schweinsburg and local activists in front of the CVS store where the aforementioned bus stop was taken away.

“All in the name of speed,” Schwartz scoffed. “They’ve increased the [bus] speed from one to two minutes from the beginning to the end of the route. … They eliminated six stops in each direction.”

The nixing of the Fifth Ave. stop is particularly egregious, he noted, since it’s a full long crosstown block in either direction to the next bus stop — which is unfair to disabled people or seniors with mobility issues.

“It’s a major problem they have to walk that distance,” Schwartz said.

A westbound M14 bus stop that was also removed, across the street at University Place, was restored after community pressure, but the bus shelter was not, Schwartz noted. He called for restoring the shelter.

The attorney scoffed at busway advocates who call the novel transit plan’s opponents “rich people.” He noted that two large apartment buildings on the uptown side of 14th St., The Victoria and The Vermeer, are, in fact, naturally occurring retirement communities, or NORCs, where people have lived for decades after moving in when the area was more affordable.

As for bringing back the free bus fare, Schwartz said, if the buses were free then more people would actually use the busway.

“They just made it harder for people to use the busway,” he said. “This is the only busway in the whole city.”

Meanwhile, the M.T.A. hasn’t made it any easier for disabled people to use the subway at 14th St. and Sixth Ave., he added. In June 2018, Schwartz, representing disabled plaintiffs in a class-action lawsuit, won a settlement agreement from the authority to add elevators for the F and L lines at the station. But more than two years later, there’s no visible sign of progress, according to him.

“It’s a contract, a settlement agreement,” the attorney asserted, brandishing a copy of the legal document. “They’re not abiding by it.”

The Council candidate noted that the funds for the elevators come out of the M.T.A. capital budget, not the operating budget, which has been drained by the drop in ridership during the pandemic.

“The capital projects for 2020 to 2023 are funded,” Schwartz said. “Subways are running at 20 percent capacity but the capital money is funded.”

Also speaking at the press conference, Schweinsburg is a member of the 504 Democratic Club, the nation’s largest Democratic political club advocating for the civil rights of people with disabilities. He’s also the president of the 8BCD Block Association, on E. Eighth St. He said the elimination of M14 bus stops on Eighth St. at Avenues A and D has negatively impacted his neighbors; to catch the M14A, Eighth St. residents now must walk an extra three blocks uptown or downtown.

“The Lower East Side is a transportation desert,” he said. “We’re a mile away from Union Square in some cases.”

Schweinsburg added that the whole corridor of the East Village served by the M14A and M14D bus routes, in fact, is a NORC based on the Census, plus has a large disabled population. Seniors with mobility issues are technically considered disabled, he noted.

“It’s always people with disabilities who are thought of last,” he said. “When you talk about all the ‘isms’ — classism, racism, sexism — when was the last time you heard ‘disabled’? We’re the largest minority, intersectional.

“Everybody is but an accident, an illness or a few years away from joining the disability community,” Schweinsburg gravely noted.

John Wetherhold, a resident of 13th St. since 1992, also attended the press conference. He strongly backed up Schwartz’s criticisms of the M.T.A. and the busway plan.

“It’s like Trump,” he said of the transit scheme. “It’s not based on numbers and analysis.”

Also was on hand to support Schwartz’s efforts was Moumita Ahmed, co-founder of Bangladeshi Americans for Political Progress. They met while working on the Bernie Sanders campaign. She said free buses are essential for New Yorkers right now.

“My parents are immigrants, working class,” she said. “They rely on public transportation to get to work.”

Instead of raising revenue through bus fares, she said New York should “tax the millionaires and billionaires.”

However, Shams Tarek, an M.T.A. spokesperson, accused Schwartz of pandering in calling for free buses.

“A healthy bus network is essential to a healthy city,” Tarek said, “and any candidate for political office suggesting the elimination of half of the system’s revenue should also identify an alternate source for the missing funding — anything short of that is irresponsible political pandering.

“If Mr. Schwartz truly wanted to improve transit service he would support the successful 14th St. busway instead of fighting it in court, and help fight for the $12 billion in federal funds the M.T.A. needs through the end of 2021 to avert painful cuts and continue critical projects, such as station accessibility.”

As for the elevators at 14th St. and Sixth Ave. — as well as for elevators also planned at Seventh Ave. — according to the M.T.A., the project was on a “priority list” and planning had begun when the pandemic hit this past spring.

The agency, however, does not support restoring a bus stop at the southeast corner of 14th St. and Fifth Ave. since this would result in two bus stops on the same block (an existing stop is at University Place), “causing road congestion and increasing customer travel time.”

Regarding restoring a bus shelter for the bus stop at the northwest corner of Union Square West and 14th St., this would be the responsibility of the Department of Transportation, according to the M.T.A.

As for the status of the anti-busway lawsuit, Schwartz and the plaintiffs are currently mulling whether to refile an appeal on it. An Appellate Division court recently tossed out their prior appeal as moot, on the grounds that when the suit was first filed, the busway was a pilot project, but now is permanent. In June, Mayor de Blasio declared the busway permanent after only eight months in operation, even though the city had previously declared it would be an 18-month-long pilot project subject to review.

The pandemic is factoring into opponents’ decision on whether to keep pursuing the fight. From the start, the opponents had been concerned that the no-cars busway would flood surrounding side streets with displaced traffic. But now, due to the pandemic, overall traffic volume is way down.

“One issue, as far as I can see, is that traffic is so reduced from pre-COVID that the issue has lost its importance vis-a-vis impact,” Schwartz said later.

In the meantime, he said he would be pushing forward with a separate lawsuit he filed in January to restore the bus stops that were removed along the M14 routes for Select Bus Service, and will also be writing the M.T.A. about the installation of elevators at Sixth Ave. According to Schwartz, the agreement with the M.T.A. said that construction of the L elevators would start by Dec. 31 of this year.