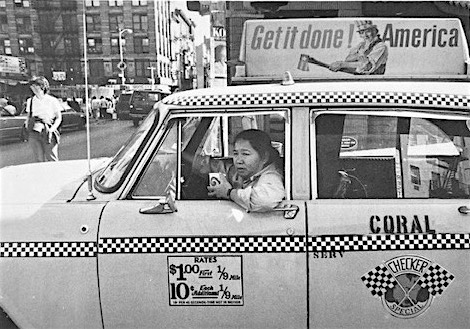 BY TAYLOR ZHOU | I heard the news Saturday morning.  Corky Lee, “Unofficial Asian American Photographer Laureate,” passed from COVID on Jan. 27 at the age of 73 in Queens, New York, where he was born.

We were not friends, but he orbited the periphery of my life like the planets around the Earth. He was about, played a significant role, but I was not always cognizant of the effects.

I think the first time I became aware of Corky was through a postcard at a nonprofit where I volunteered a few years after college. In the postcard, a Chinese woman was sitting in a taxi waiting for the light. Her right arm rested on the steering wheel, the other hand cupping tea or coffee. The ad on the cab’s roof read, “Get it done America,” with Uncle Sam wielding an ax. The juxtaposition was unexpected.

I grew up in New York City, where my family has resided since the 1900s, attended public schools, and never saw photographs of a Chinese woman. She was not in my textbooks, library books, magazines (I loved Sixteen), advertisements (print or television), and certainly not in this “masculine” profession. In my mind, the quintessential New York City taxi driver was Robert De Niro.

We met in person a few years ago when he covered the Hakka Conference in New York City. We conversed a bit online when he said the Hakkas, an ethnic group from Canton, may have been among the Transcontinental Railroad workers and introduced a fish to the West during the Gold Rush. To hear my heritage affirmed endeared him to me even more.

I’d imagine there was so much more he could have shared with us and years ahead to do so. He was a very vibrant 73-year-old. You’d never have guessed his age. He needed that vitality. As he said, there is so much to do he wished there were five of him. I wish too.

To learn more, see the video “Not on the Menu: Corky Lee’s Life and Work,” by Junru Huang. To support the documentary in progress on Corky’s life, please visit www.PhotographicJustice.com

Zhou is a New Yorker and New York University graduate. She shares her passion for her Chinese-American heritage at www.MsZhou.us.