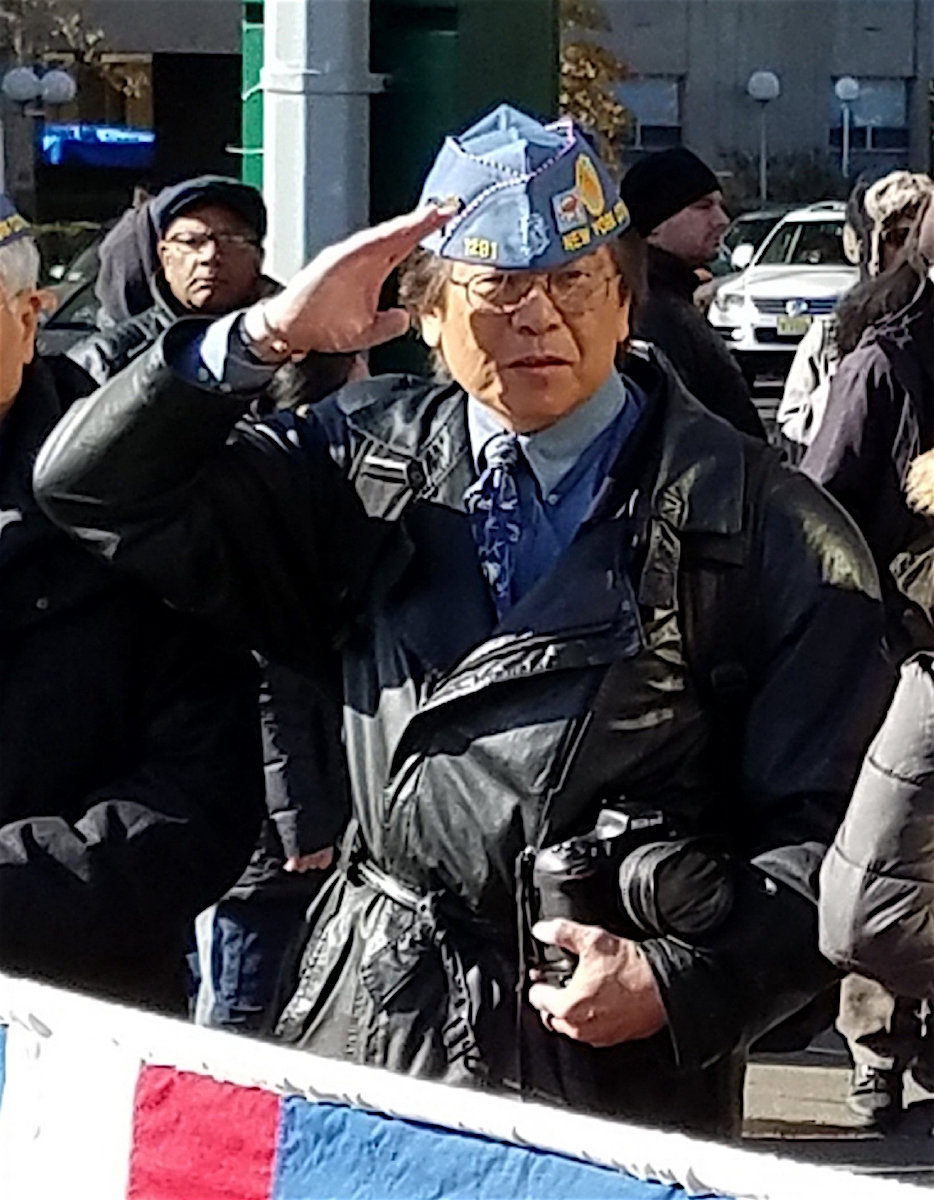 Corky Lee marching with the Kimlau Post's Sons of American Legion at a Memorial Day parade in Chinatown. (Photo by Karlin Chan)

BY THE VILLAGE SUN | Updated Feb. 6, 6:30 p.m.: Corky Lee took a final tour through his beloved Chinatown on Saturday morning.

Due to the ongoing pandemic, the family, for safety reasons, chose not to hold an indoor memorial. A legendary photographer and activist, Lee died at age 73 of COVID on Wed., Jan. 27.

His brother Johann (John) Lee and Chinatown activist Don Lee (no relation) put together the route.

The streets were lined with Lee’s friends seeing him off. Members of the American Legion Kimlau Post and the Guardian Angels were out, sporting their respective military caps and red berets.

“Corky made visible what often went unseen,” Brewer wrote. “Chronicling the Asian American experience, he ensured that Asian American advocacy, cultures and accomplishments across the country were not erased, and spoke out against injustice. … The city has lost an indefatigable activist and a wonderful person.”

That was followed by nine more stops on Lee’s last lap through the historic neighborhood.

First was 70 Mulberry St., the site of the former P.S. 23, which was destroyed by a fire last year. The building housed several Chinatown nonprofits.

The third stop was 54 Elizabeth St., home of the “Basement Workshop” that Lee helped organize, which focused on civil rights and promoting the voices of Asian Americans in cultural arts.

Next was Bayard and Elizabeth Sts., where Lee photographed the massive Chinatown protest in 1975 over the beating of Peter Yew by Fifth Precinct police officers.

At Confucius Plaza, Lee fought to ensure that the new housing project would provide fair housing and employment for Asian immigrants.

The next stop, 21 Pell St., was where Corky Lee co-founded the 21 Pell Project to document the history and stories of Asian Americans.

The route next passed through Kimlau Square, in recognition of how Lee advocated for the Chinese American WWII Congressional Gold Medal to honor Chinese Americans’ heroism.

No. 22 Catherine St. was home of the original Chinatown Health Clinic and another home of the Basement Workshop.

The final spot highlighted on the procession was 99 Madison St., the original headquarters of the Two Bridges Neighborhood Council. Lee presented photographic evidence supporting the group’s efforts on behalf of tenants’ rights.

Those who lined up along the procession route to say goodbye to Lee were asked to follow all C.D.C. health-safety guidelines, including wearing face masks, practicing social distancing of a minimum of 6 feet and using hand sanitizer before and after touching objects.

Following the Chinatown procession, Corky Lee was interred at his chosen final resting place in Kensico Cemetery, in Valhalla. A brief outdoor service was performed at the burial.