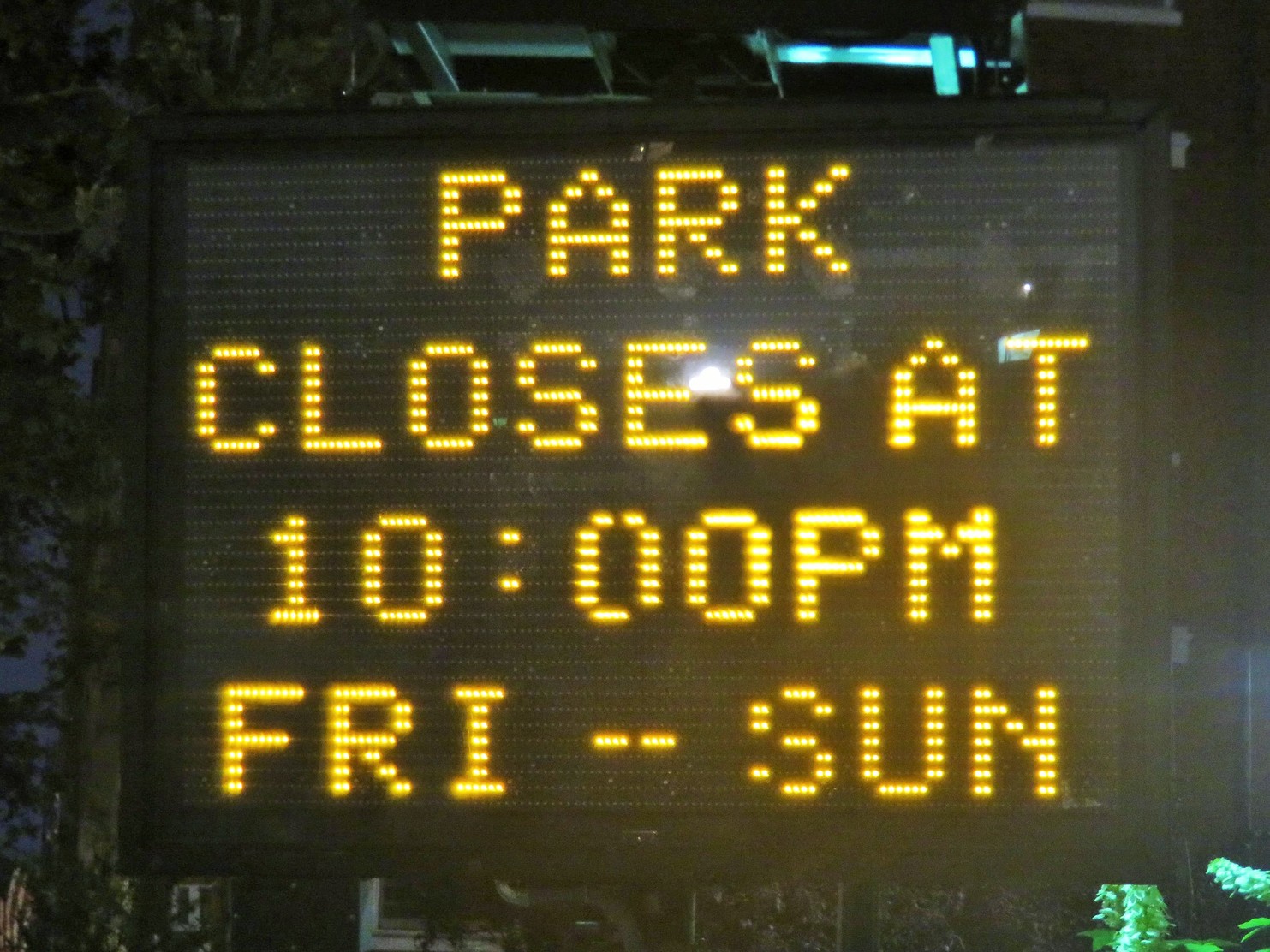 BY LINCOLN ANDERSON | To use police lingo: “Negative.”

That is, the 10 p.m. weekend curfew for Washington Square Park has not been lifted.

Some media outlets, including ABC News and NY1, have been reporting that the park’s three-week-old 10 p.m. curfew for Fridays through Sundays has been moved back to midnight, which is what it always was before. NY1 reported that it was told this by the Parks Department on Friday.

But, according to the Deputy Commissioner of Public Information, the Police Department’s press office, the 10 p.m. weekend curfew remains in effect.

Enforcement of the early closing, though, is another matter and will be “reviewed on an ongoing basis,” according to police. What this means, a police spokesperson indicated, is that park users’ behavior will determine the police response.

“They’re going to go on a night-by-night basis on this one,” the spokesperson said. “If it gets extremely disorderly and violent, action will be taken.”

On the other hand, he said, “if people are just hanging out,” that will be another matter.

For example, police recently have not been enforcing the early closing, showing “flexibility,” they say. So, from the sound of it, if park users “behave,” it can be a loose curfew.

Saturday, though, reportedly did see some violence in and around the park. The New York Post said a total of six people were injured, including two men who were knifed in their legs when a dispute broke out among a group of about 50 people who were dancing in the park around 2:15 a.m.

Meanwhile, the Parks Department did not immediately respond to a request for clarification on its allegedly telling NY1 that the early weekend curfew has been rescinded while police are telling The Village Sun the curfew is still technically in effect.

As for the new apparent 10 p.m. curfew at Tompkins Square Park, the police spokesperson said he did not have information on it.

In response to The Village Sun’s request early Sunday morning for clarification on the status of the Washington Square Park weekend curfew, D.C.P.I. also sent a lengthy written response, part of which is reprinted, below:

“In coordination with the NYC Parks Department, the closing time of Washington Square Park has been moved from midnight to 10 p.m. on Fridays, Saturdays and Sundays,” the statement said. “Additional officers will be present to close the park. The decision to move the closing time will be reviewed on ongoing basis.

“This decision was made following numerous concerns raised by residents related to noise, late-night gatherings, drug use and other complaints. Additionally, the decision was made due to safety concerns following several recent incidents [in April and May] where large, and sometimes violent groups have refused to leave the park, and engaged in disorderly behavior.

“This behavior has included jumping on vehicles, making threats to officers, throwing objects, such as bottles and other objects, at police and in one instance throwing unknown objects at responding FDNY and EMT vehicles which were responding to a [fire in a] building.”

The last incident was the five-alarm blaze that gutted Uncle Ted’s Chinese restaurant, at 165 Bleecker St., shortly after midnight on Sat., May 22. Police said a large group was blocking the street and refusing to disperse, delaying emergency vehicles from responding to the fire.

The police statement also included a recap of how the curfew enforcement went last weekend in the park. The 10 p.m. curfew had actually started the weekend before that, but steady rainy kept people away from the park, so it was moot.

According to the police statement:

“On Friday night June 4 the park was cleared at the 10 p.m. closing time without incident.

“On Saturday, June 5, 2021, at approximately 2220 hours there was a large disorderly group gathered in Washington Square Park after closing time (approximately 100 people). The group was given multiple opportunities to comply with lawful orders regarding park closures and to disperse and exit park. The group refused and began acting in a violent manner toward uniformed officers, throwing glass bottles and other objects. There were 23 total arrests… . Charges include Resisting Arrest, Obstruction of Governmental Administration, Unlawful Assembly, Menacing, Harassment, Disorderly Conduct and Failure to Comply with Sign [apparently referring to the posted signs stating the 10 p.m. curfew]. Eight Members of Service sustained minor injuries.

“The police response on Sunday, June 6,” the statement said, “reflected a marked improvement to the disruptive conduct in the park [on that Saturday] and highlights the department’s flexibility to dynamic circumstances as they unfold.”

Basically, on Sun., June 6, into Mon., June 7 — the night after the clash between cops and young parkgoers — police let the park stay open all night. That evening the late-night crowd made a special effort to clean up after themselves and not leave behind any litter. Basically, since the confrontation in the park last Saturday, police have not enforced the early weekend curfew.

In addition, the D.C.P.I. statement included the open letter sent to various politicians in May by local residents, block associations and business owners, saying they were “fed up” about the park situation. The letter demanded enforcement of what it called the park’s “long-standing curfew,” plus the laws or rules against alcohol and drugs, amplified music and biking and skateboarding in the park, among others.

“We, as your constituents, are unified and mobilizing,” the letter declared, “and we’re not letting this go until the park is returned to a safe and pleasant environment for us all.”