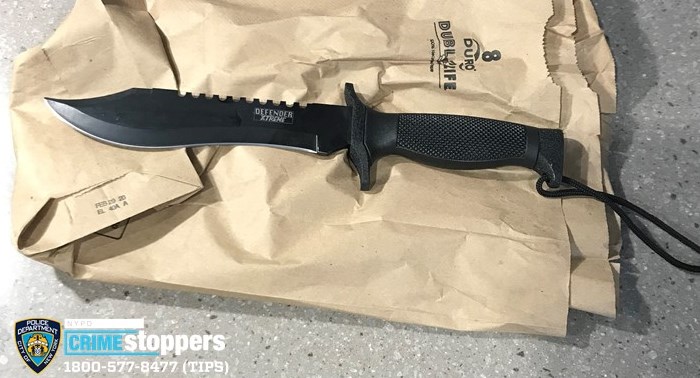 Police said they recovered this knife from a man who had been menacing officers with it at an East Village deli. (Courtesy N.Y.P.D.)

Police shot a man in the East Village early Thursday morning after he menaced them with a foot-long hunting knife.

According to police, around 6:40 a.m., two female officers assigned to the Ninth Precinct entered the Health Greens Gourmet deli, at 48 Third Ave., at E. 10th St.

The officers were followed inside by a 55-year-old male, who was holding a black Bowie knife in his right hand.

The Daily News reported that the knife wielder is “a well-to-do businessman with a history of mental health issues.”

“Wounded suspect Peyman Bahadoran, who lived alone in a Manhattan apartment just a five-minute walk from the bodega, was depressed over his failed marriage and indignant about the Minneapolis police killing of George Floyd, according to a source at his ritzy building near Union Square Park,” the News reported.

Once inside the place, the man menaced the officers with the blade. One cop used her Taser on him, but it didn’t stop the man’s advances.

Bahadoran then turned his attention to the store clerk and the two engaged in a confrontation, before the individual attempted to exit the store. The man then shoved the second female officer as they were both exiting the deli.

Once outside, the man continued to motion toward his waistband and refused the officer’s repeated demands to stop his aggressive advances.

The officer, as well as an additional officer who responded to the scene, fired their guns, striking the suspect in the arm and torso.

“He was talking about ‘Why is this violence against black people, when is this s— going to end, this s— is happening because of the f—ing cops, the cops need to learn how to act,’” the source told the News. “I think it finally took its toll. You’d probably be weirded out if you met him.”

Bahadoran has lived in his building for more than 20 years and worked in the stock market, and probably was in the deli to buy beer, the paper said.

After the shooting, police cordoned off the intersection of Third Ave. and E. 10th St.

The investigation remains active and ongoing.

Correction: The original version of this article stated that Peyman Bahadoran worked as a real estate salesperson at Highcap Group. However, he does not have a license with that company and has not worked there for two or three years.