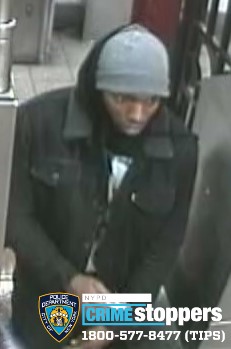 Police have released another photo of the suspect in a Tues., Feb. 16, shooting on the Lower East Side that left a 75-year-old woman wounded.

The alleged suspect wore a face mask and a hood over his head in the previously released surveillance image, which was taken inside a Clinton St. store before the 11:55 a.m. incident.

In the newly released photo, the suspect is shown going through a nearby subway turnstile after the incident with his mask down and hood off of his head.

The gunfire erupted after the shooter, who was on foot and crossing Clinton St. at Delancey St., argued with a BMW driver who almost hit him while turning right onto Clinton St. After the driver got out of his car and continued arguing, the gunman fired multiple shots, missing the other man, though hitting a female senior pedestrian once in the buttocks.

The victim was removed to Mount Sinai Beth Israel Hospital in stable condition.

The suspect was described as last seen wearing a dark-colored jacket, dark pants, gray knit cap, dark-colored hooded sweatshirt and a white shirt with “Tupac Shakur” on the front.