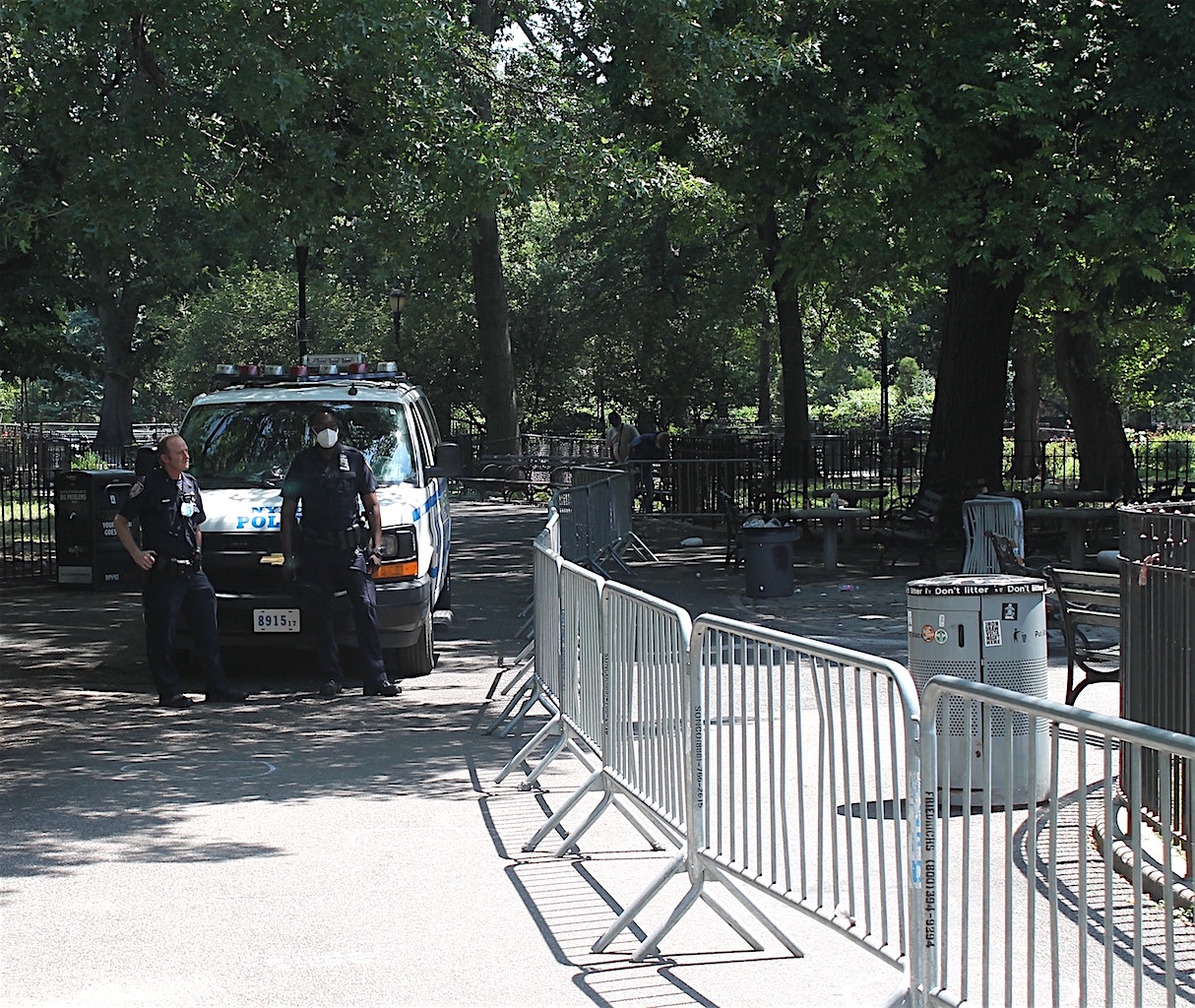 Two officers were stationed by a police van near the Samuel Cox statue, which has been cordoned off by a layer of metal police barricades. (Photo by The Village Sun)

BY THE VILLAGE SUN | The Cox watch continues.

On Monday, two Ninth Precinct officers and a police van were posted near the Samuel S. Cox statue in Tompkins Square Park — the third consecutive day police have been detailed next to the once-obscure monument.

On Saturday, police showed up in force, saying they had heard protesters were planning to tear down the statue.

Cox served as a congressmember in Ohio and later New York and was also ambassador to the Ottoman Empire.

But during the Civil War he was notably a vocal opponent of emancipation who made derogatory statements about blacks. Cox and many other northern Democrats thought slavery should continue, even if the Union won the war. Abraham Lincoln’s Republicans were the party of abolition.

Police have also encircled the statue on all sides with movable metal barricades — call them “Cox blockers.”

Also cordoned off are the chess tables, a popular seating area that has gotten less sketchy in recent years.

It looks like cops are making sure to always have at least two of them posted there. At one point, two officers who had been guarding the statue walked off to deal with something else in the park, and two other officers promptly showed up to watch Cox.

Asked if the statue was under threat of attack, one officer shrugged that vandals had already spray-painted it with graffiti — implying that the answer is yes.

Also, two months after the police-involved killing of George Floyd, protests are flaring up again, literally. Sunday night, hundreds of protesters swarmed through Lower Manhattan, setting garbage cans afire and trashing police vans on the Lower East Side. It was reportedly a show of solidarity with protesters in Seattle and Portland, where clashes with law enforcement have gotten intense.

As for whether the Tompkins Samuel Cox statue is now under 24/7 police guard — as the Washington Square Arch is — no officers on duty by the monument early Monday afternoon could answer that. As one of them said, higher-ups make those decisions.

The police press department and Ninth Precinct community affairs did not immediately respond to requests for more information on the guarding of the Tompkins Square statue.