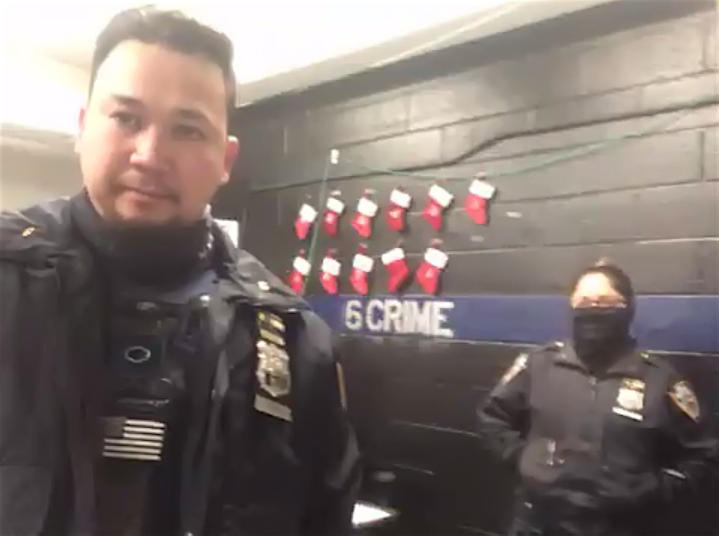 Neighborhood Coordination Officers Brian Garcia and Annalee Simon led a "Build the Block" meeting for the Sixth Precinct's "A" sector on Wed., Dec. 9.

Cops crack down on loud music in Wash. Sq. Park, but drugs persist

BY THE VILLAGE SUN | Don’t try bringing a loudspeaker to Washington Square Park; police won’t let you inside the green space with it. And to those who do use electric amplifiers in the Village park, be forewarned: If enough of cops’ warnings to stop using amps go ignored, they will confiscate them.

Drugs and amplified music in Washington Square Park, along with homelessness in the surrounding area, were top issues at a Sixth Precinct police meeting Wednesday night.

The “Build the Block” virtual meeting was for the precinct’s “A” or Adam sector, which includes the famed park. It was led by the sector’s two neighborhood coordinating officers, or N.C.O.s, Brian Garcia and Annalee Simon. A small group of locals tuned in.

In response to an audience member’s question on whether it’s legal to use loudspeakers in the park, Garcia answered no.

“We are on top of it,” he said. “They’re not allowed to have speakers in there.

“If people are entering the park with a speaker, they are stopped,” he added.

Amplified music in the city’s public parks is only allowed with a permit.

Simon noted that police had just confiscated a speaker in the park the night before.

However, Garcia added that the presence of “protesters” makes it tougher to confiscate amps.

“Whenever you enforce something, you can’t just do it with two or three cops,” he noted. “You need at least eight or 10 cops dealing with it because we’re dealing with protesters.”

William Abramson, the director of brokerage at Buchbinder & Warren, said his company manages properties along Eighth St. and elsewhere that are in earshot of the park.

“The more speakers you get rid of, I’m sure the neighborhood would appreciate that,” he said.

The loss of police manpower was an issue, especially relating to enforcement against drug offenses in the park.

“When I got here six or seven years ago, we used to have a SNEU team,” Garcia said, referring to a plainclothes Street Narcotics Enforcement Unit. Other units brought the total of Sixth Precinct officers who were focused on combatting drugs around and inside the park to 16. Now, though, there are only four officers per tour making arrests in the park.

“It’s more like we’re undermanned,” he said. “Unfortunately, we just don’t have that manpower anymore. It sucks. Believe me, we know that.”

Officer Simon also noted that the protests forced the police to focus their attention on things other than drugs in the park.

“We’ve been dealing with protests, we’ve had to go to Trump Tower,” she said, adding that officers are now finally “getting back into routine.”

The cops said the demonstrations that roiled the city starting after George Floyd’s death back in May and that stretched past the presidential election have now started to fade with the cold weather.

“The protests have calmed down a lot in the last few weeks,” Garcia said.

Concerns were voiced at the meeting specifically about the drug scene in the park’s northwest corner, as well as around the chess tables in the southwest corner.

He added that police must actually witness drug offenses in order to make arrests.

Asked if the surveillance cameras in the park can help spot criminal activity when officers are not around, Garcia said, actually, the park’s cameras were on the fritz.

“All of the cameras in the park are down as of four days ago for some reason but should be fixed soon,” he said.

“We have been massively sidelined by these protests,” a third officer said. “Before the protests, that’s all we made were narcotic arrests.”

At the same time, though, the officers said individuals busted for narcotics “know how to play the game and they’re being released” and are quickly back on the streets.

The third officer explained, “When offenders are arrested for narcotics-related offenses, they are being released almost immediately.”

Emily Saunders noted she has lived on Washington Square for more than 20 years. She said she was alarmed to hear about the difficulties police are facing in combating drug use in the park’s northwestern corner. Right from her window, she can see all the activity going on there.

“It is shameful for my child not to be able to walk into that park during the day and not see people injecting themselves with needles,” she said. “What is going on there every day is unacceptable and should be treated like an emergency every day.

“I’m stepping over human feces on the sidewalk,” she said. “I’m stepping over people on our steps. I don’t want to sound like an entitled white woman — but this is not the Bronx. … This is the Village. This is N.Y.U. and there are children. … This is an institutional and cultural place.”

According to Officer Garcia, there are currently two homeless encampments in the sector, on Washington Square East and Washington Place. However, due to the “Defund the Police” effort this summer, the Police Department’s Homeless Outreach Unit, formerly located on E. 12th St., has been disbanded. That, in turn, changes how cops respond to calls about homeless people.

“What we do now is take pictures of the encampments,” he explained. The officers then send the photos to the precinct’s community affairs department, which forwards them to the Department of Homeless Services, which is then supposed to do the outreach.

Another issue raised at the virtual meeting was people riding bicycles and e-bicycles on the sidewalk. Garcia acknowledged it’s a problem but indicated that apprehending fast-moving cyclists is not easy.

Another complaint also concerned bicycle delivery guys — not riding their bikes, though, but standing around on Bleecker St. smoking pot and drinking. The officers said that was a condition they would address.