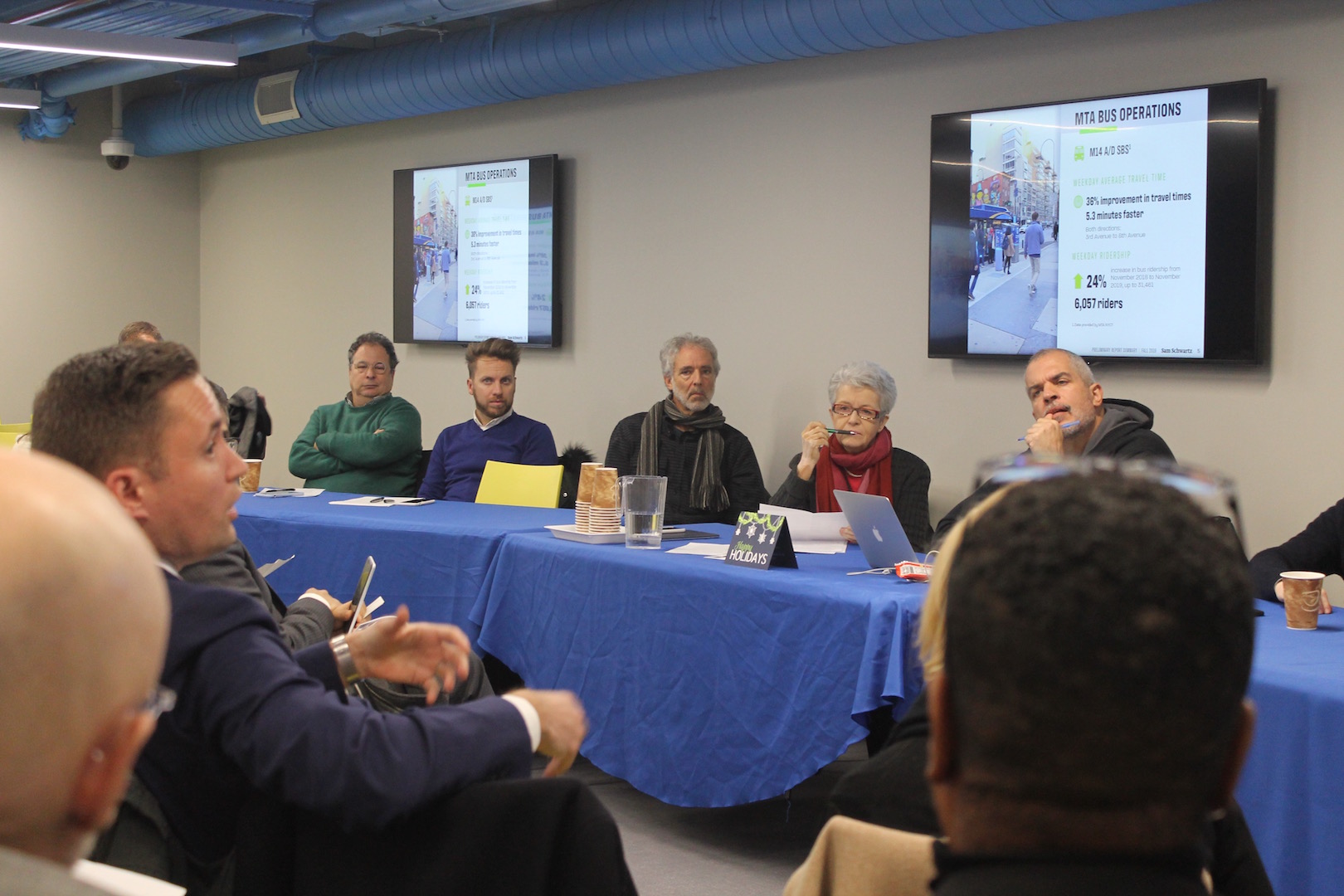 Ed Pincar, the Department of Transportation's Manhattan borough commissioner, left, speaking about the 14th St. busway at a meeting of the Community Board 4 Transportation Committee in December. (Photo by The Village Sun)

Community boards ‘playing it by ear’ on holding meetings

BY LINCOLN ANDERSON | Downtown community boards are currently in limbo — and seeking guidance — on whether to continue to hold public meetings in light of the coronavirus pandemic.

On Wednesday, Governor Cuomo banned gatherings of more than 500 people, while also saying that gatherings of 500 or less must be slashed to 50 percent capacity, in order to put more space between attendees.

As the situation rapidly evolves — or devolves — from day to day, as of Wednesday, local community boards were still figuring out their next steps.

However, with Mayor de Blasio saying the current health crisis could last up to six months, it sounds like a new approach probably will be needed. Certainly, a fair number of board members are above age 50, a population said to be at greater risk from the virus.

Community Board 2 covers from 14th St. to Canal St., west of the Bowery/Fourth Ave. In an e-mail to The Village Sun, Carter Booth, the board’s chairperson, said, “The situation is fluid.”

“C.B. 2 is taking it day by day,” he said. “We are in regular consultation with the Borough President’s Office and are following their guidance. We just had our last regular committee meeting for the month tonight and our full board meeting is next Thursday.

“We plan on live-streaming Thursday’s full board meeting for those who who are not able to attend in person, but [board] members who are not in attendance will not be able to vote. We will also accept e-mailed public comments that we will distribute to board members in advance of the meeting.

“For now, C.B. 2 meetings are continuing as scheduled through this month,” Booth said, “though board members will be excused if they are not comfortable attending. Obviously, those in at-risk groups and those who don’t feel well should not attend.

“We are seeking appropriate venues for our meetings to provide ample space between seats for attendees for additional safety,” he added. “We will be evaluating conditions in the coming weeks as we begin to schedule our April meeting dates. The situation is fluid, and we suggest checking the C.B. 2 Web site calendar and Facebook frequently to check for changes.”

Community Board 3 covers from 14th St. to the Brooklyn Bridge, east of Bowery/Fourth Ave. In a phone interview, Susan Stetzer, the board’s district manager, called the situation “unprecedented.”

“We haven’t set a policy yet” on whether to keep holding meetings, she said. “We’re playing it by ear.

“In the meantime, we have a meeting canceled for tonight,” she noted. “There was nothing urgent on the agenda and a number of members weren’t coming.”

Stetzer said that was the Parks Committee and that its chairperson had alerted her they would not be meeting.

“The Mayor’s Office is not issuing guidelines” on whether or not to meet, Stetzer added.

However, she noted that community board members cannot vote unless they are present at the public meetings.

Asked what C.B. 3 would do if they can no longer physically hold meetings, Stetzer did not have a ready answer.

“We don’t know,” she said. “We’ve never faced this emergency before. We have no history, no precedent.”

Stetzer said the board’s Executive Committee is slated to meet next week and would discuss what actions the board should take. However, who knows how much the landscape will have changed by then.

At the same time, some Brooklyn community boards — though not all — were already swiftly moving to postpone meetings, concerned about putting the health of board members and the public at risk.

Meanwhile, state Senator Brad Hoylman said he would introduce legislation to allow community boards, Community Education Councils and other public bodies subject to the Open Meetings Law to meet in emergencies — and vote on issues — via telecommunication and videoconferencing.

Hoylman’s legislation, created in consultation with the executive director of the Committee on Open Government, a New York State agency, would allow public meetings to occur transparently, in full public view, while allowing people to avoid public health and safety threats.

“We can’t allow responsible public health precautions like self-quarantine and ‘social distancing’ to grind the work of open government to a halt,” Hoylman said. “This legislation will allow public bodies to operate with transparency while avoiding unnecessary exposure to COVID-19. I’m grateful for the feedback from local community board members, who inspired this bill, and look forward to working with open government advocates and my colleagues to pass this important legislation as soon as possible.”

Under Hoylman’s bill, in emergency situations, during which public meetings could not be safely conducted in person, the public body would be required to notify the public about alternate means to monitor or participate in the meeting; the public body would also be required to provide justification for why these emergency measures are needed. The exemptions under the measure would only be valid during a state declaration of emergency, specifically in areas covered under that declaration.

“Community leaders shouldn’t be forced to choose between canceling meetings and risking exposure of themselves and others to COVID-19,” Hoylman stated.

The legislation includes safeguards against its abuse or misuse, to ensure that it is only utilized in true emergencies. Also, the law would expire in 2022, giving the state Legislature the ability to judge its effectiveness and determine any needed changes before renewing it.

According to Hoylman, the Centers for Disease Control and Prevention is recommending canceling events, social distancing and telecommunication to prevent the spread of coronavirus.

“I haven’t had a chance to fully review Senator Holyman’s proposed legislation, but it sounds like a great idea,” he said. “Brad is a former chairperson of C.B. 2, so I know he thoroughly understands how much this would help everyone in the coming months. This is new ground. It is a fluid and evolving situation.”