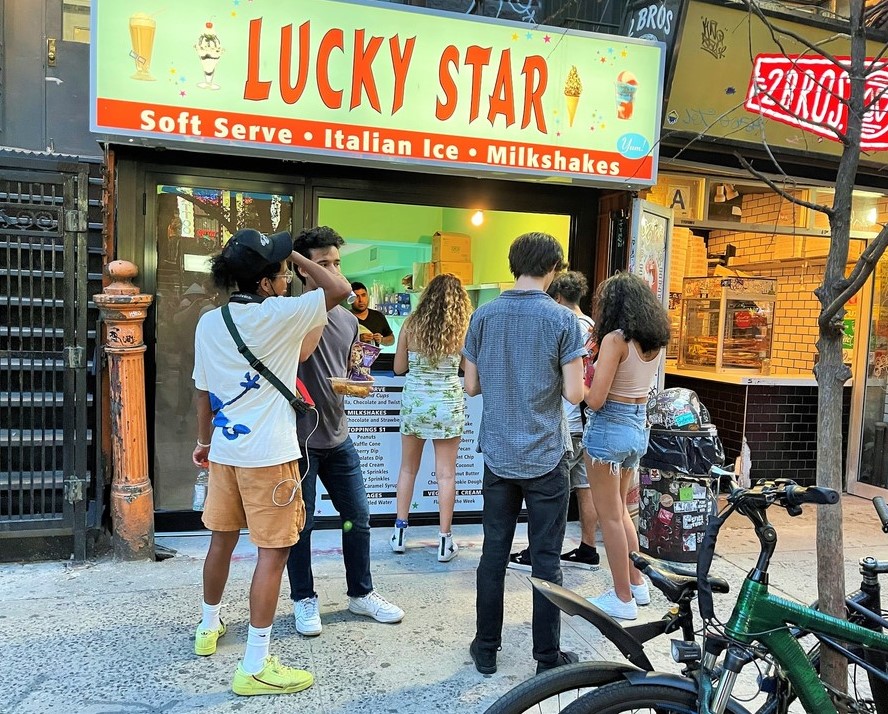 BY LINCOLN ANDERSON | Updated Tues, Sept. 21, 11 p.m.: An effort to add beer and wine to the menu of a soon-to-open Lower East Side ice cream shop is getting a chilly reception from a local block association, but the business owner claims he isn’t getting a fair shake.

Trigger a.k.a. Trigger Smith, who formerly operated the Continental cheap-shots bar at Third Avenue and St. Mark’s Place — and before that a live-music venue of the same name at the same location — plans to open the ice cream shop, Lucky Star, at 135 Division St., at the intersection of Division, Ludlow and Canal Streets.

The neighborhood is informally known as Dimes Square, after two friends, Alissa Wagner and Sabrina DeSousa, founded a restaurant, Dimes, on Division Street about eight years ago, followed by Dimes Deli and Dimes Market.

Within Dimes Square, and right outside Trigger’s future ice cream joint, is a small traffic triangle bounded by Division, Canal and Ludlow Streets. Some know it as Dollar Brew.

But this third storefront is larger. Trigger envisions it as part ice cream shop, part cafe, plus hopes to have acoustic music some nights. He sees beer and wine as fitting in with the vibe of what he envisions there.

He lives in the area, too, and loves it, having relocated there from the East Village.

“It’s the last bohemian neighborhood in Manhattan,” he said, adding that he loves the diverse mix of young people that hang out in Dimes Square, from fashionistas and artists to skateboarders.

But, in his view, the only way to make the business viable is for it to be what he called “a hybrid.”

“The problem with ice cream is it’s seasonal,” he explained. “Half of it will be ice cream with a takeout window. But the other half will be tables and chairs, sandwiches. I want to do acoustic music at night. I have enough hearing damage [from years of amplified rock music at Continental] but I love music and working with musicians. I’ve said all along that it will be some kind of hybrid: ice cream, cafe, acoustic singer/songwriter nights, sandwiches, vegan options — all my vegan friends are, like, threatening me if I don’t have vegan ice cream and vegan options.”

The artist Zito will paint the Lucky Star location’s interior in a 1950s “Atomic” style. Trigger is very into the design of the place, wanting it to look retro, though not wanting to overdo it.

At any rate, that’s the plan. However, Trigger recently met with the local block association, called Space.Block Association, and it did not go well. According to him, the group supports ice cream at the location but not alcohol.

“They don’t want this becoming Hell Square and I don’t blame them,” he said, referring to the nine-block bar-saturated neck of the Lower East Side. “This neighborhood is special. I love it down here. I’ve lived in Hell’s Kitchen, the East Village, but I think this is my favorite. I only want to add to the neighborhood in a positive way.

“My other two places are takeout only,” he said of the first two Lucky Stars. “There’s no room, it’s just a takeout window. Otherwise, I would have tables and chairs there, too.”

The meeting with Space.Block members lasted about 40 minutes. The members had seen on Trigger’s application that he was seeking to stay open till 4 a.m. and challenged him on it. He told The Village Sun this was actually a negotiating tactic.

“I asked for 4 a.m. expecting Space.Block to offer midnight and that we’d compromise at 2 a.m. but they never got back to me regarding parameters,” he said. In fact, he said he asked them at the meeting what “parameters” for hours they would accept for the place, but they did not want to get into it then.

But he said he now realizes that they were dead set against him from the start.

Space.Block Association did not respond to request for comment for this article.

According to him, the block association members said their main concern is that individuals that hang out on the benches at the Division Street triangle would now hang out at his place. But he countered that he knows how to deal with all types of patrons from having run Continental for 27 years, often standing right in front manning the door.

“It’s not the skaters I’m concerned with,” he said. “They don’t bother anyone. Just the opposite. It’s the hipsters that I’m afraid of!

“I was always at Continental,” he added. “I run a tight ship. I’m hands-on, and if there’s a stricter owner/operator than me, I’d like to meet them.

“They also said, ‘Your place is going to add to the noise corridor on Division Street.'”

But he disputed that, too, arguing the triangular intersection’s wide layout, and the fact that there are no buildings directly opposite his space, means sound from Lucky Star would not be “trapped” and cause a din and echo.

In turn, he accuses the block association not only of overreach but says, “I felt like someone stabbed me in the back.” Namely, he said one of the members must have told a local restaurateur about the meeting because that person then confronted Trigger when they bumped into each other on the street. As Trigger tells it, the restaurateur fumed at him, “You lied! You said you were going to open an ice cream shop but you’re really trying to open a bar with a 4 a.m. license!”

“I’m really excited about doing something positive and special in that space,” Trigger insisted. “I’m certain that my place will have a very positive presence in our neighborhood — I live at Essex and East Broadway. It’s their prerogative to support it or not. However, this gossiping and sharing the content of our conference call/meeting with a nonmember of their association is highly unprofessional and unethical.”

In addition, he accused Space.Block of subsequently mischaracterizing his beer-and-wine application as “a full-on liquor license” and also as “liquor service.”

As for the block association’s concerns about the group that gathers at the triangle, Trigger said, if that’s how they feel, they ought to try to do something more with the space.

“I suggested to them, ‘You obviously can’t simply ban people from a public space, so why don’t you be proactive and have a mini-flea market and/or farmers market there, possibly an outdoor art gallery? Add some strategic lighting. Make it brighter at night.’ They haven’t done any of these things, which to me would make sense on so many levels.”

Plus, he said, none of the regulars at the triangle would purchase beer from him anyway. The spot is known as Dollar Brew, after all.

“Why would they buy beer from me,” he asked, “when they can go to one of several neighboring convenience stores and get a can of any beer for one dollar?”

Trigger said he’s not exactly sure when his beer-and-wine license application will go before Community Board 3 for its advisory recommendation. He had planned to do it in August but thinks it will now be in October.

As for his two other Lucky Star ice cream places, he said they’re going gangbusters.

“Last week was our best week since we opened three months ago on Delancey,” he said. “St. Mark’s has been busy since Day One, two weeks ago. It doesn’t hurt to be next to 2 Bros. $1 Pizza, believe me. It’s the busiest pizza place I’ve ever seen!”