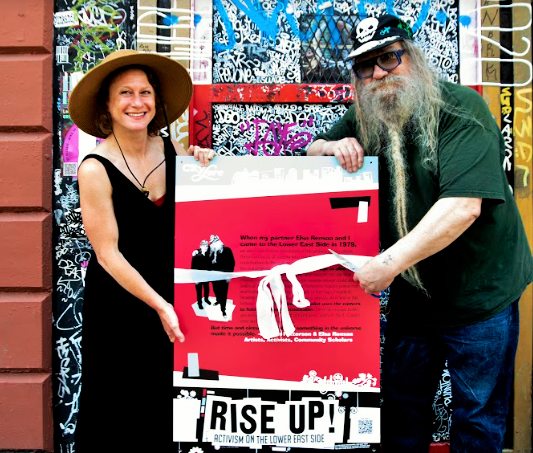 BY BEN TOGUT | In May, City Lore recognized Clayton Patterson and his lifelong partner, painter Elsa Rensaa, with a plaque to celebrate their many years of activism. Residing on Essex Street on the Lower East Side since 1979, Patterson and Rensaa have channeled the colorful and turbulent spirit of their neighborhood into their art, creating work that is both provocative and enduring.

A multimedia artist, Patterson is best known for documenting the 1988 Tompkins Square Park Riots. Using a handheld video camera, Patterson rendered the brutality unhoused people and onlookers endured at the hands of the New York Police Department over enforcement of a new park curfew, leading to the indictment of six police officers.

In addition, Patterson captured the zeitgeist of the Lower East Side in the 1980s, documenting vibrant underground drag artists, as well as the thriving hardcore punk scene at the Pyramid Club.

Clayton and Elsa received this inaugural marker as a part of City Lore’s Rise Up! Activism on the Lower East Side initiative.

“Rise Up! is an oral history-based placemarking project that aims to honor and illuminate the activist histories of pioneering organizations and individuals from the LES, our longtime home,” said Molly Garfinkel, co-director of City Lore. “Rise Up! focuses on individuals and sites of cultural and arts activism. And not only are Clayton and Elsa among our honorees, but Clayton is one of our project advisers, as well. He and Elsa have called the LES home since 1979, and they have made such deep community roots and contributions here.”

Receiving this honor means a lot to Clayton Patterson and his wife Elsa.

“City Lore is a prestigious organization that’s heavily involved in folklore and dealing with different cultural aspects around all of New York City that are connected to folk culture,” Patterson told The Village Sun. “You have a wide cross section, including graffiti, with photographers like Martha Cooper and shows with Henry Chalfant. It’s a really prestigious place in my world.”

As an artist, Patterson has always wanted to capture the underground, even when more lucrative opportunities presented themselves. 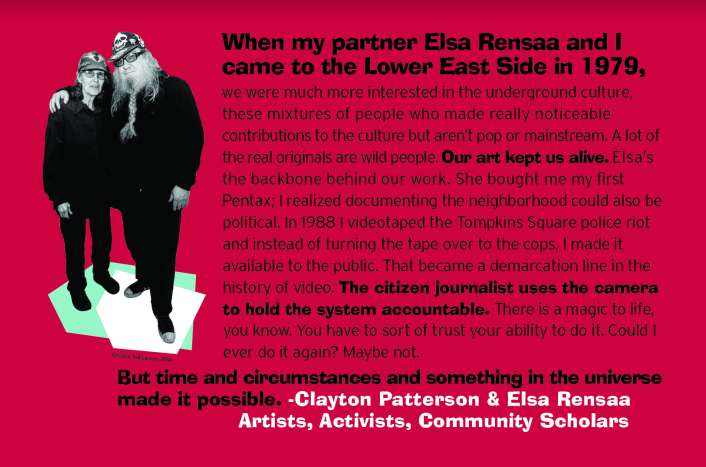 “If I had a picture of Keith Richards taking a leak between two cars I could probably sell it now for $10,000,” Patterson argued. “But I’m not really interested in what everybody else has. I’m interested in things that are more obscure, that are unique to a neighborhood, things that are underground. They’re much more important because they’re less covered and less known. “

The eccentric landscape of the Lower East Side has been an indispensable backdrop to Clayton and Elsa’s life work. Over their decades of creating as artists, the couple eschewed a life of stability, following their passions and embracing the bohemian spirit of their neighborhood. For Clayton, the end result is a life that has been anything but predictable.

“I lived the American Dream,” Clayton told The Village Sun. “For some people the American Dream is a big gold Cadillac going to a Rolling Stones concert. That was never my thing. My thing was the adventure. And to be able to come to the Lower East Side and have lived through the wild and free days, that for me was the American Dream.”