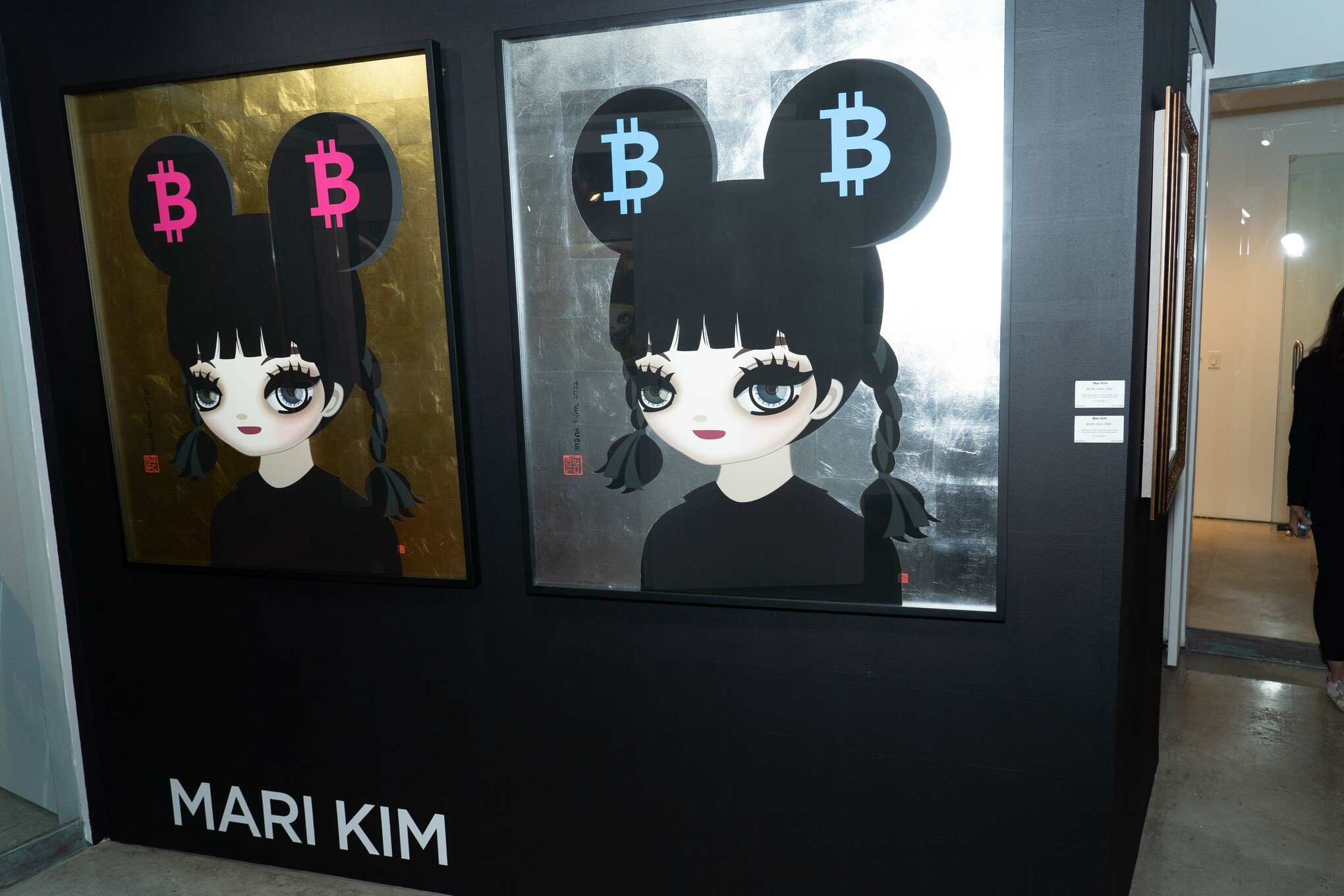 BY STEPHEN DiLAURO | The uneven quality of the current group show at West Chelsea Contemporary is a result of curatorial jumping on the NFT bandwagon, it seems to me. However, three young artists in the exhibit titled, “(In)Tangible Futures: Women at the Forefront,” are exciting and sure to gain more importance as collectors and curators catch on.

These artists are Sofia Cianciulli, Lyora Pissaro — the great-great-granddaughter of Camille Pissarro, one of the founders of French Impressionism — and Mari Kim. They all three employ digital technology to one degree or another.

But first, please, let’s be clear: NFTs are not fine art. The cartoonish vignettes purveyed in NFT “communities,” such as Bored Ape Yacht Club, Crypto Punks and others, are fads. Remember pet rocks? Chia pets? Hula hoops? NFT “art” is a digitized manifestation of the same impulse to monetize the silly. (Well, hula hoops had some exercise value.)

Blockchain is not a casino. (It’s a ledger system for tracking and authenticating transactions.) I believe blockchain technology has a genuine place in society going forward. Eventually, the hucksters will be revealed for what they are and NFT art will be relegated to hanging on the virtual walls of virtual houses in the digital confines of the digiverse. The bubble will burst and the alleged financial value will dissipate.

Fortunately, it doesn’t seem that NFTs have the potential to create massive societal damage, in the way that social media does. But this exhibit does display the hubris and narcissism that dominates online discourse. Cupcake & HoneyB, two promoters who are not artists, are represented with some mundane and puerile NFTs created to cash in on the craze. You can’t blame these women artists or, in fact, the promoters. Everybody wants money.

However, I am going to take issue with the recent art world tendency to try and upgrade less-than-stellar art to something more than it is by claiming to benefit a cause. I saw a lot of that with the recent spate of group shows purporting to benefit Ukraine. (I would say “charitable cause” but supporting a war effort, no matter how noble, goes against the grain for me. Should all those artists be registering as agents of a foreign government?)

In the exhibit at West Chelsea Contemporary, the “powerhouse” NFT purveyors Cupcake & HoneyB mention that the sales benefit women’s causes through donating a whopping two and a half percent of the “proceeds” ( a nebulous term that can mean pretty much anything — after costs, after taxes, after travel expenses, whatever).

Fortunately, Cianciulli, Kim and Pissarro are responsible for the far greater part of the exhibit and make it worthwhile to visit. I had first-blush qualms about Kim’s paintings but that passed. At first, they reminded me of the Keane prints my late mother loved. (The paintings were the subject of the 2014 Tim Burton movie “Big Eyes,” and a telling example of the male-dominated art world of society’s patriarchal, hopefully soon-to-be past).

Kim cites her fascination with manga animation and drawing and the connection is undeniable. The works are still kitschy but also charming and the Bitcoin symbols in the mouse-ear hair buns are an ironic touch.

Cianciulli, who is the true powerhouse in the exhibition, readily acknowledges her debt to the French genius Yves Klein, who at one point in his career coated models in paint and had them press their bodies against canvasses. Sofia Cianciulli doesn’t need a man to tell her what to do with her body. Slathered with paint, she creates her work as performances and transmutes them into digital light boxes. The results are captivating and some of the most exciting artistic expressions so far in this new millennium.

Lyora Pissarro, in a refreshing female-male collaboration with the Allaux brothers, paints what she calls “mindscapes.” These paintings could easily stand on their own. However, as displayed, digital projections by Oliver and Alex Allaux make the pieces something else through the use of digital light projects.

This show presents 21st-century art at its most innovative, creative and inclusive. And then there are also NFTs.

West Chelsea Contemporary is located at 231 10th Ave., at W. 24th Street. The exhibit will hang until July 14.

DiLauro is a playwright and critic. You can find his Bohemian Times Gazette at bohemiantimes.substack.com.