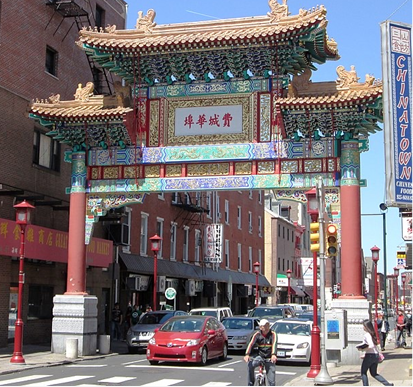 Some of the grant money is allocated for creating a Chinatown gateway arch.

Chinatown gets $20 million in revitalization grants for streetscape, health and culture

The D.R.I. grants earmarked for Chinatown total $20 million in funding announced by Governor Hochul last year to help stimulate the the historic neighborhood’s economy, which took a nosedive due to the pandemic.

Although the whole city suffered economic losses, the Chinatown area saw a drop in foot traffic earlier than most. The hit to Chinatown started in December 2019, months before the first reported case of COVID-19 was diagnosed in the U.S., and was mainly due to xenophobia.

Among the winning Chinatown proposals were:

• $5 million to renovate Kimlau Square, which is home to the Lieutenant Benjamin Kimlau Memorial Arch, dedicated to Chinese Americans who sacrificed their lives in overseas conflicts

• $4 million to beautify the Park Row pedestrian corridor, which connects Chinatown to the Financial District and City Hall

• $3.3 million to upgrade a section of Sara D. Roosevelt Park

• $689,000 to expand and maintain the Light Up Chinatown festive street lantern project

• $1 million to establish a new community health and wellness center at 60 Madison St., which would offer high-quality and culturally accessible health and mental health services

The winning proposals are fully funded through the grants and no further fundraising is needed.

In a statement, Rodriguez said, “One of the oldest and largest Chinese neighborhoods in the United States, Chinatown is rich with history and culture. Home to many ‘mom and pop’ businesses, funding is being provided to assist existing small business owners with building and infrastructure improvements.

“Enhancements to public space include beautifying Park Row — the gateway to Chinatown — and the expansion of public space at Kimlau Square and Sara D. Roosevelt Park. Through the Downtown Revitalization Initiative, funding is also being provided to establish a new culturally accessible and responsive community health and wellness center.

“The diverse array of exciting and transformative projects represents a holistic approach that will improve the health, livability and provide economic opportunity for the area’s diverse residents, workers and business owners. Congratulations to the Chinatown community.”