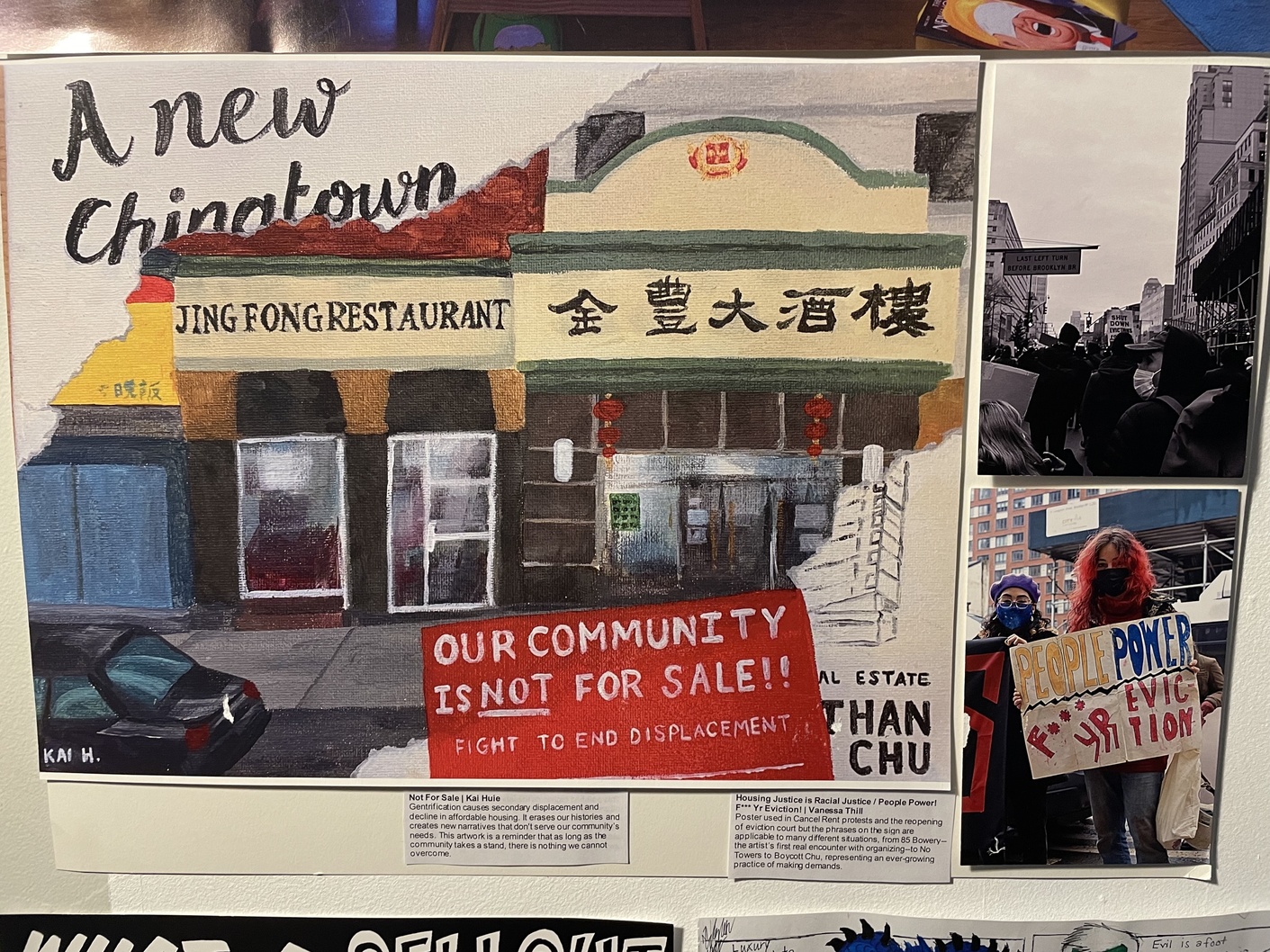 An artwork in the #ProtectChinatown Art and History exhibit focuses on the fight to save Jing Fong restaurant. (Photo by Dashiell Allen)

BY DASHIELL ALLEN | A new art show in Chinatown tells the history of recent neighborhood activism, and advocates for the passing of a community rezoning plan that supporters say would stop displacement.

The show, in the storefront gallery, or “meeting space” as it’s sometimes referred to, of the architecture collective CityGroup, aims to visualize the technicalities of zoning laws through artistic renderings. It also showcases the work of local artists and activists, as well as telling a brief history of parts of Chinatown’s labor movement during the 20th century.

Upon entering the gallery, the show’s first room focuses on the Chinatown Working Group’s rezoning plan — on the right wall there’s a technical description of the scheme, while images on the left depict hypothetical futures for the neighborhood.

Formed in 2008, the Chinatown Working Group brings together a broad coalition of organizations in Chinatown and the Lower East Side.

Working with the Pratt Center for Community Development, these groups created a neighborhood zoning plan that would limit the height of new development and require all housing built on local New York City Housing Authority land to be affordable. In general, the plan’s goal is to “curtail the domino effect” of displacement that occurs as a result of overdevelopment, when “large-scale luxury towers, hotels and chain stores raise property values, which leads to real estate tax increases and rent hikes on residents and small businesses, pushing them out, and promoting the continued speculation of land and buildings.”

Now, with the election of Christopher Marte to the City Council, supporters of the effort see a unique opportunity for the Chinatown Working Group plan to get passed.

“Zoning is a set of policies that is pretty alienating to people. It’s this very technical language,” said Michael Cohen, an architectural designer with CityGroup. “So we realized we could use our design skills as architects to make images that would describe what it might look like if the zoning plan was passed.”

Cohen emphasized that the plan doesn’t prevent development, and still allows the neighborhood to “evolve,” albeit in a controlled manner.

Within the renderings on the left wall, “what you see on the top are different sites where market forces are still driving the construction process,” said Cohen. “Whereas the bottom row is a more idealistic version where market forces have been eliminated, and we asked people to propose what they would build in that case.

“I understand the limitations of zoning,” he added. “I don’t think zoning is the perfect solution to fighting displacement and also to producing the amount of affordable housing that we really need. But I think that it’s one tool within many different approaches that are necessary.”

The show’s second half is an art exhibition that was originally displayed outside of the Museum of Chinese in America (MOCA) by picketers, displaying “anti-displacement” art by local artists.

Cohen sees the two parts of the show as interconnected.

“The interaction and overlap, intersectionality of those different efforts” to protect the community “are entangled, and there’s a sense of solidarity within the neighborhood,” he said.

The show’s labor history portion includes a photograph of Silver Palace restaurant in Chinatown in 1997 as workers picketed for back wages against restaurant C.E.O. Richard Chan — as well as the landlord, Joseph Chu — the grandfather of current real estate mogul Jonathan Chu.

CityGroup is a Lower East Side architecture collective that regularly holds discussions and debates about urban planning and public space.

Its name is a play on the investment banking company “CitiGroup.” As the collective notes, while “Citi” is emblematic of private and corporate interests, “City” is “a place that is defined by the public.”

The #ProtectChinatown Art and History exhibit is on display at 104B Forsyth St. through at least Jan. 8, open to the public on weekdays from 12 p.m. to 6 p.m. and weekends by appointment at group@citygroup.nyc