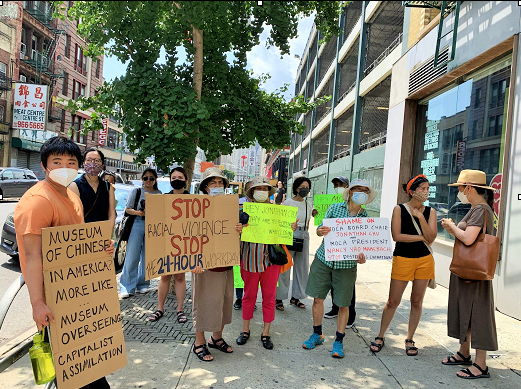 Demonstrators protested outside the Museum of Chinese in America on July 18. (Photo by Elias Mansell)

BY ELIAS MANSELL | Updated Tues., Aug. 3, 12:45 p.m.: For the second time since its reopening on Wed., July 14, dozens of protesters surrounded the entrance to the Museum of Chinese in America (MOCA) — but not for the exhibitions.

More than a year after the pandemic closed the museum and a fire destroyed its collections building, protesters say MOCA is facilitating displacement. They place the museum at the center of controversies over the $8.7 billion plan to close jails on Rikers Island and the relocation of a local restaurant.

“We aren’t singling out the museum,” Mahir Rahman, an organizer with Chinese Staff and Workers’ Association (CSWA), said. “We are speaking to a systemic issue within this community of the deep inequality in Chinatown.”

As a part of the City Council’s agreement with Mayor Bill de Blasio to convert to borough-based jails — including one to be constructed in Chinatown, at 125 White St. — MOCA will receive $35 million. In a statement released on Jan. 28, MOCA emphasized that it “is and has always been unalterably opposed to building a jail in Chinatown.” However, protesters argue that the money signals MOCA’s tacit support of the Chinatown “megajail” construction, which is strongly opposed by community members.

According to protesters, MOCA’s acceptance of the $35 million is part of a pattern of the museum prioritizing its own interests over those of the community. Jing Fong, a dim sum restaurant and banquet hall, closed its 800-seat location at 20 Elizabeth St. in March due to the pandemic’s impact on business. While Jing Fong plans to relocate to a smaller location in Chinatown, protesters blame Jonathon Chu, the 20 Elizabeth St. landlord and MOCA board co-chairperson, for lost restaurant jobs.

As Jing Fong closed, 19 members of the artists collective Godzilla withdrew from the planned MOCA exhibition “Godzilla vs. The Art World: 1990–2001” on March 5 to protest Chu’s position on the MOCA board, MOCA’s alleged complicity in the construction of the Chinatown jail, and the museum’s failure to “communicate openly and publicly with the community it claims to represent.” MOCA subsequently canceled the exhibition.

Tensions between MOCA and community activists boiled over at the museum’s reopening on July 14, in turn, sparking the second protest four days later. According to Rahman, “Nancy Yao [Maasbach] yelled at us, accosted us, harassed us” at the reopening protest.

“Jonathan Chu and Nancy Yao are not competent, and it’s not appropriate for them to lead a community museum,” Siyan Wong, an artist who withdrew her work from MOCA, said. “They pretty much threw the community under the bus.”

In a statement to The Village Sun, MOCA President Maasbach denied that the museum supports the megajail project.

“MOCA has always been an opponent of jail construction in Chinatown,” she said. “It is unfortunate that a small group of museum critics has misrepresented our stance for political goals that have nothing to do with MOCA.

“We remain focused on building on our extraordinary reopening and the launch of our new exhibit, “RESPONSES: Asian Americans Resisting the Tides of Racism.” MOCA will continue to provide space for AAPIs to share stories, share voice, and share art during this very difficult time.

“We are thrilled at what our museum reopening and new exhibit mean for our community and for all who will see it at this critical moment in history.”