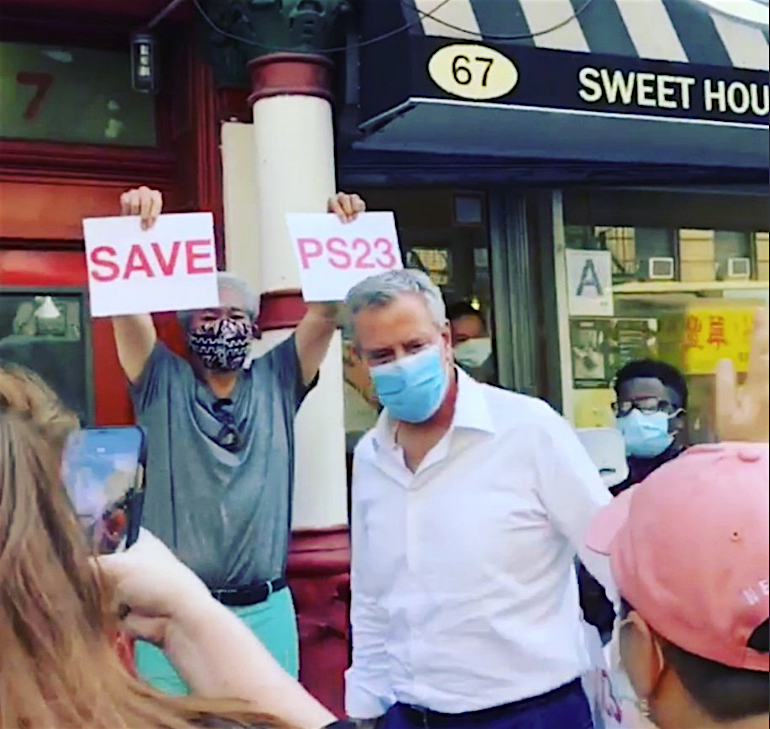 The mayor toured Chinatown earlier this month to show support for local small businesses. During the Aug. 11 event, he stopped to savor an ice cream cone.

But, despite downing the chilled treat, local activist Karlin Chan said it wasn’t cool that de Blasio kept ignoring his “Save P.S. 23” signs. Then again, the mayor may well recognize the Community Board 3 member from his fight against the Lower Manhattan mega-jail plan, and is trying to dodge him, Chan guessed.

“His first stop was Chinatown Ice Cream Factory, where he tried to show concern for community by small chitchat with several locals,” Chan said. “Then he walked around the corner down Mott St. to Wo Hop, at 15 Mott, where he did the same with waiters, then ate when looked like beef and tomatoes awkwardly with chopsticks. I jokingly mumbled to the waiter to give him a bowl of egg drop soup with a knife and fork to eat it.

“He didn’t make any speech or even say much. It was just a publicity stunt backfiring on him,” Chan scoffed.

“I was able to place myself strategically in spots where he passed, even when he was eating,” the activist noted. “I never said a word or yelled, just stood there in silent protest.”

Speaking of beef, Chan’s current frustration with the mayor is over the fate of the former P.S. 23, which, after being seriously damaged in a fire, has been demolished down to its lower stories. The building has a deep history in the neighborhood and was most recently home to several local nonprofit cultural groups.

“Though he announced $80 million for either rebuilding or restoring P.S. 23,” Chan said of de Blasio, “two months have passed and the Department of Citywide Administrative Services has yet to allow an independent structural engineer experienced in restoration inside the structure to do an analysis, as they promised. Meanwhile, the clock is ticking on the 90-day community ‘advisory board’ [to give its opinion] — a board that only consists of the building’s five tenants and reps from each of the district’s elected officials, plus a rep from C.B. 3.

“This building is more than the five tenants,” Chan declared. “It belongs to the community, and the community needs to be at the table on its future. Whether restore or rebuild, it’s still an entirely new structure except the stone ground level.”