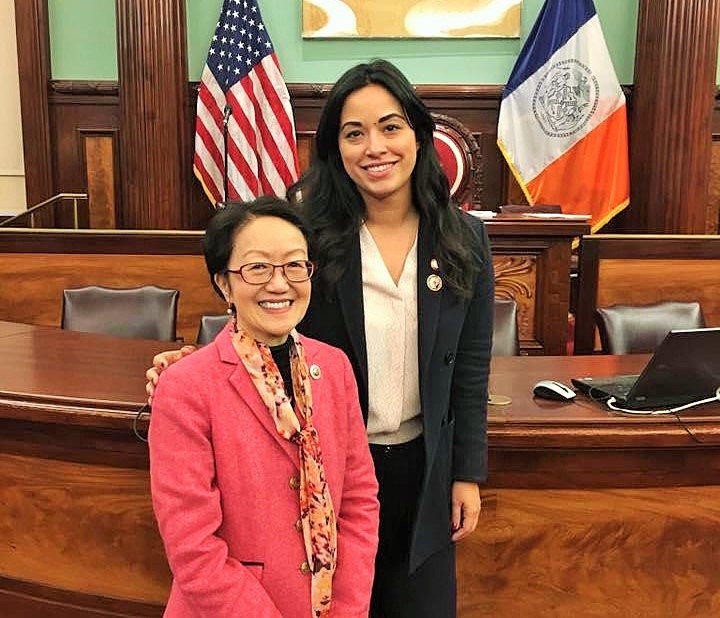 A month ago, Councilmembers Margaret Chin and Carlina Rivera said they needed "real and clear direction" from the Department of City Planning on whether the Soho/Noho rezoning plan would really create any affordable housing. It's unclear what they were told by City Planning in response.

BY LINCOLN ANDERSON | A month ago, they called on the Department of City Planning to “return to the table now” and improve the Soho/Noho rezoning plan, so that it actually would create affordable housing.

Will Councilmembers Margaret Chin and Carlina Rivera now return with the news that their request was granted and that they are satisfied with the plan?

If so, they aren’t saying — at least not yet. The Village Sun reached out to both councilmembers but has not gotten a response.

One month ago, in a joint statement, the two politicians made a prominent show of demanding that the rezoning must yield affordable housing and that this must be “maximized.”

In general, critics have bashed the rezoning plan for the hot Downtown neighborhoods as being an unseemly giveaway to developers, “wrapped in an aura of affordable housing.” Meanwhile, that “aura” won’t translate into affordable units, the opponents charge.

In their statement at that time, the two councilmembers said, in part: “We want to make one thing absolutely clear when it comes to the Department of City Planning’s Soho/Noho rezoning — affordable inclusionary housing shouldn’t be an option — it should be the only option.

“Regardless of the larger issues with the Mandatory Inclusionary Housing program — which the de Blasio administration has refused to review in its remaining time in office — the fact remains that D.C.P. has not addressed real issues raised [about the Soho/Noho rezoning] by sincere housing and community advocates.

“We call on D.C.P. to return to the table now — not in three or four months — with real plans for how the Soho/Noho plan can guarantee the most affordable housing possible for our communities,” Chin and Rivera said. “We must have real and clear direction in the next month in order to address key issues more sufficiently prior to the City Planning Commission hearings.”

As part of the ULURP review process, the City Planning Commission’s only public hearing will be held on Thurs., Sept. 2, starting at 10 a.m.

Village Preservation, among others, has demonstrated how the Soho/Noho rezoning would likely lead to a loss of existing affordable housing, which would not be replaced. Particularly at risk is Chinatown, one of the so-called “opportunity zones” identified in the rezoning, although City Planning has deceptively rebranded it “Soho East.”

Andrew Berman, Village Preservation’s executive director, said he, too, has no idea what Chin and Rivera may have negotiated with City Planning — or even what they specifically intended to negotiate, given that their original statement was general.

“It must also address the fact that the affordable housing the city’s plan would create would be for people wealthier than the least-well-off 25 percent to 30 percent of the current neighborhood, and charge them higher rents than they currently pay. I have no idea how they intend to address that, other than the Community Alternative Plan or something like it.”

Under the Community Alternative Rezoning Plan, devised by Village Preservation, “as-of-right” residential development would be allowed with affordability mandates — but with no upzoning. Currently, Soho and Noho, which both sport an underlying manufacturing zoning, don’t allow residential development unless the builder first obtains a special permit, a cumbersome process.

Opponents who back the alternative plan say that the area’s F.A.R. (Floor Area Ratio) — a formula that governs buildings’ overall bulk — must stay at 5, which is what is currently allowable for commercial and manufacturing development in Soho and Noho. Under the city’s plan, on the other hand, new development could be up to 2.4 times larger than currently allowed.

“A mandatory affordability requirement without an upzoning would enjoy broad support within the affected communities, since it is the upzoning, not the affordable housing, to which residents object,” the alternative-rezoning document states.

As for the chances that City Planning modified anything in response to the councilmembers’ request, the track record of Community Board 2 doesn’t bode well. As Jeannine Kiely, the board’s chairperson, stated during the Aug. 23 ULURP public hearing on the rezoning led by Manhattan Borough President Gale Brewer, C.B. 2 presented a very detailed resolution on the proposal to City Planning, but the agency incorporated none of its recommendations.