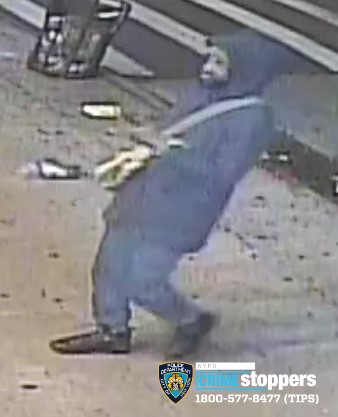 According to the Daily News, the weapon was a wine bottle — that was full, making the blow harder. In a sick move, the attacker apparently also videoed the assault.

After the unprovoked Thurs., April 2, attack, the assailant fled.

E.M.S. medics responded and transported the victim to Bellevue Hospital in stable condition where he was treated for a gash to the back of his head. The News reported that the worker suffered a concussion and has been unable to return to work yet.

The suspect is wanted for felony assault. Police are offering a reward of up to $2,500 for information.

The News said the attacker then returned to the same store three days later and knocked things over before leaving.

Police provided surveillance video and a photo they said were taken during the incident at the location, which is across from the Penn South Co-op.