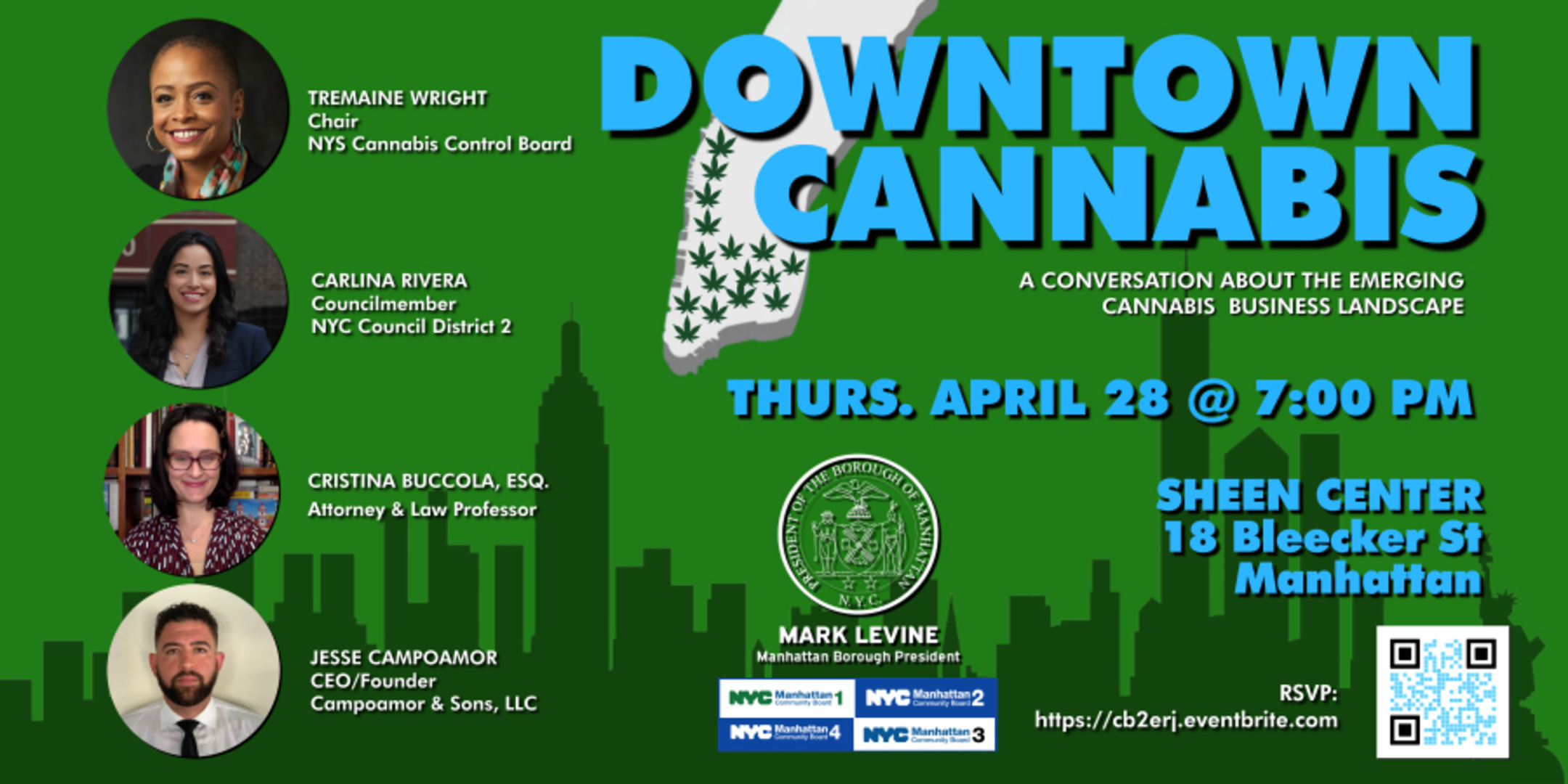 BY THE VILLAGE SUN | Local community boards are no longer “bogarting” the full list of panelists at the upcoming forum on the legalized pot economy.

The event, “Downtown Cannabis: A Community Conversation About the Emerging Cannabis Business Landscape,” will be held Thurs., April 28, from 7 p.m. to 9 p.m. at the Loreto Theater at the Sheen Center, at 18 Bleecker St.

The four panelists will include Tremaine Wright, chairperson of the New York State Cannabis Control Board; Councilmember Carlina Rivera; Cristina Buccola, a leading cannabis attorney, advocate and law professor; and Jesse Campoamor, who for the last two years was the deputy secretary for intergovernmental affairs under both Governors Cuomo and Hochul.

A former assemblymember, Wright went on to serve as the first director of the state Department of Financial Services’ Statewide Office of Financial Inclusion and Empowerment. A Bedford Stuyvesant resident, she is an attorney and small business owner.

Rivera represents Council District 2, including the East Village, Flatiron, Gramercy Park, Rose Hill, Kips Bay, Murray Hill and the Lower East Side. She has sponsored legislation to reduce the collateral consequences of marijuana criminalization, and promote policies that prioritize the inclusion of communities most harmed by marijuana criminalization; including bills focusing on the impact of marijuana policies on child welfare and banning pre-employment testing for cannabis use.

Attorney Buccola focuses on assisting small businesses, social equity groups and legacy market entrepreneurs with cannabis licensing, legal and business matters and regulatory requirements. She both worked at white-shoe law firms and was the general counsel of High Times magazine. She was a core member of the StartSMART coalition, one of the groups responsible for pushing New York’s cannabis legalization over the finish line.

Campoamor, as the governor’s deputy secretary for intergovernmental affairs, played a key role in helping to get adult-use cannabis passed in New York State. He was part of a senior team that worked on drafting and negotiating the final legislation. Now he works in the private sector.

The forum is being hosted by Community Boards 1, 2, 3 and 4, which cover Manhattan from the Battery up through the East Village on the East Side and Hell’s Kitchen on the West Side.

The event will be in person only. There won’t be a livestream, but the recording of the discussion will be viewable on the Community Board 2 Facebook page.

RSVP for tickets (free) at cb2erj.eventbrite.com.

To submit questions to the panel in advance, e-mail to hello@cb2manhattan.org.