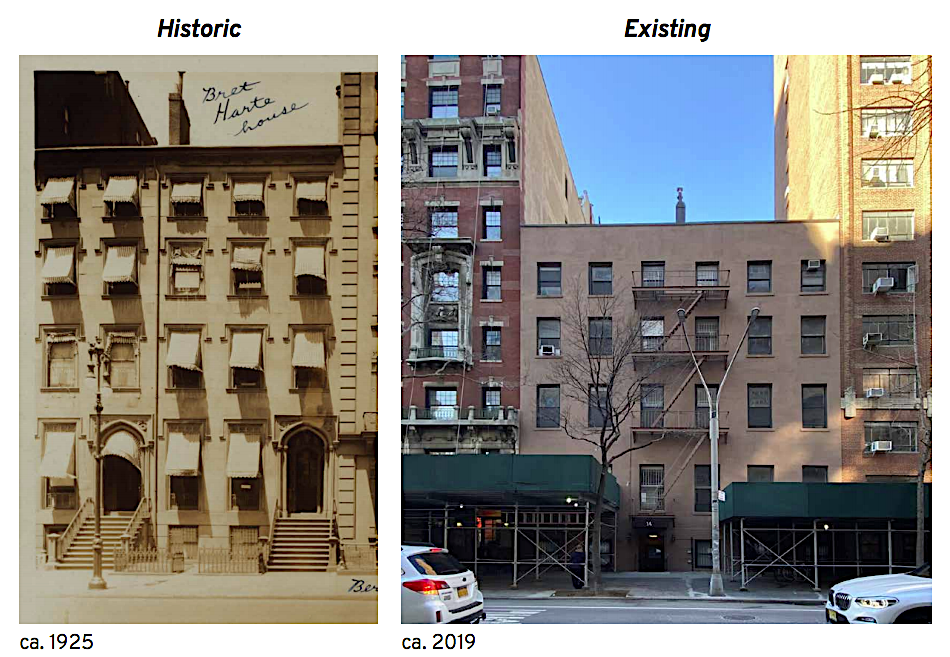 Contrasting photos showing how the facade of 14-16 Fifth Ave. has been altered to its current "no style" look.

BY THE VILLAGE SUN | When they go high, Community Board 2 stays low.

At its full-board meeting last Thursday, C.B. 2 voted overwhelmingly to disapprove the demolition of two low-scale, landmarked buildings on Lower Fifth Ave. at Eighth St. in order to replace them with a soaring sliver tower.

The existing buildings have “cultural and social significance” and their low scale is important in the context of the surrounding streetscape, the board said.

“They’ve had a history of predatory equity in which they’ve pushed out tenants,” Hoylman said.

About 20 apartments in 14-16 Fifth Ave. have been emptied, probably largely due to buyouts. Some of the address’s apartments are rent-regulated.

Hoylman took part in a protest against the project with Village Preservation earlier this year.

The two buildings, constructed in the Gothic Revival style, are around 170 years old and, at some point, were combined into one. In addition, in 1937, their facades were shorn of architectural details and the two stoops removed. An exterior fire escape was added. But the roster of famous and influential people who resided at the formerly elite address lives on as significant cultural history, advocates point out.

As the resolution by the community board’s Landmarks and Public Aesthetics Committee states, “The buildings have considerable cultural and social significance…reflecting the character of the neighborhood as it changed from homes of the early occupants who were socially prominent to the center of bohemian culture.”

Yet, the 50-foot-wide site’s current owner seeks to demolish what’s there now and construct a 19-story, 241-foot-tall tower designed by prominent architect Robert A. M. Stern. The C.B. 2 committee’s resolution note the project’s design is “inspired by the older apartment buildings in the area along Fifth Avenue.”

Nevertheless, it still would be a sliver tower and an extremely tall building for the Greenwich Village area.

As the C.B. 2 resolution notes, “The [proposed] building’s height is far out of proportion to the 50-foot-wide Fifth Avenue frontage and is higher than all of the buildings on Fifth Avenue below 14th Street except for 1 Fifth Avenue, built as a hotel.”

More to the point, the site is also within the Greenwich Village Historic District, meaning 14-16 Fifth Ave. is protected against demolition by the city’s Landmarks Law. Demolition would only be allowed if O.K.’d by the city’s Landmarks Preservation Commission. The opinion of C.B. 2, on the other hand, is advisory only, but is a factor that L.P.C. would take into consideration in its decision.

The Stern-designed project has been kicking around for a few years. It first popped up in 2017 on the pro-development New York YIMBY site, at which time the tower was said to be planned at 367 feet and 27 floors. In late 2019, plans were filed with the Department of Buildings. The current plan has been modified from the earlier 2017 one, shaving off about 125 feet in height.

According to Andrew Berman, executive director of the Greenwich Village Society of Historic Preservation, the site’s zoning has an “unusually generous” F.A.R. (floor-area ratio) of 10. That’s because the zoning at this spot is older, predating the creation of the G.V. Historic District in 1969.

The preservationist said the Madison project should not be approved because, first, it’s in a landmarked district and, second, its scale is “completely inappropriate.”

Assemblymember Deborah Glick also weighed in against the new high-rise.

The community board received close to 400 e-mails in support of saving the existing structure versus far fewer backing the project, with many of these latter being people in the real estate field.

At the start of the C.B. 2 meeting, some members of the public spoke in favor of the Stern tower — but they were not uninterested parties.

“The existing buildings have completely lost their original row-house appearances,” declared Jordan Glaubinger, who said he lives in the Village. His LinkedIn page identifies him as an employee of the Corcoran Sunshine Marketing Group, “the recognized industry leader in the planning, design, marketing and sale of new luxury residential development.”

Similarly, Tim Cass, a senior managing director at the Corcoran Group, scoffed, “The building as it stands doesn’t have any redeeming architectural features. It’s been stripped.”

Attorney Valerie Campbell, counsel to the developer, stated, “The new building will be a sympathetic and high-value addition to the neighborhood,” adding it would be “contextual” with the surrounding area’s architecture.

She said it’s ironic that residents of the Brevoort apartment building, located across Fifth Ave. from the site, complain the tower would block their western views — when their own building replaced historic low-rise structures, too. C.B. 2 members, though, did not go for her argument, finding it a bit convoluted.

On the other hand, David Gruber, a C.B. 2 member, said the fact that the current building is not “architecturally distinguished” should not be the deciding factor.

“Some of the ornamentation was taken off in the late 1930s and early 1940s,” he said. “They wanted a cleaner facade, shorn of its details. This is all part of the history of Greenwich Village.”

Gruber noted there are other spots in the Village where the same thing was done, such as the old Provincetown Playhouse buildings on MacDougal St., now owned by New York University, and another building on Charles St.

Fellow C.B 2’er Janet Liff agreed. She said, given that a number of other historic Village buildings have also had their facades denuded, O.K.’ing the demolition of 14-16 Fifth Ave. due to its not having its original ornamentation “would not be a good precedent.”

“It’s not so much the height,” he said. “It’s a needle building. It’s about proportions.”

The Landmarks Preservation Commission is scheduled to hold a hearing on the project on March 9.