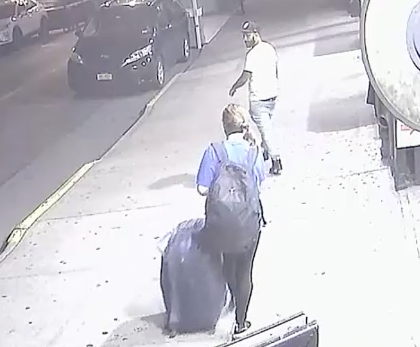 Police announced the arrests of two young homeless people in a recent assault on a bus driver in the East Village.

On Friday, cops said that they had collared Juan Ortiz, 35, and Shady Newton, 26, both of whom were reported as “undomiciled.”

On Mon., Aug. 31, at 10:50 p.m., the 35-year-old M.T.A. bus driver was motoring along on his route on the M2 bus — which runs from Washington Heights to Fourth Ave. and Ninth St. — when he spotted two passengers, a man and woman, allegedly threatening another passenger.

The driver ejected the man and woman at Eighth and Lafayette Sts., then proceeded to park the bus in front of 51 Astor Place (nicknamed “The Death Star”) to take a break.

The booted bus riders, however, promptly returned and reportedly forced open the vehicle’s door. According to police, the man then told his female sidekick, “Beat him up,” and she began to punch the driver in the face. The attackers then fled, with the woman toting a big backpack and wheeling a large piece of rolling luggage and the man walking ahead of her not carrying anything.