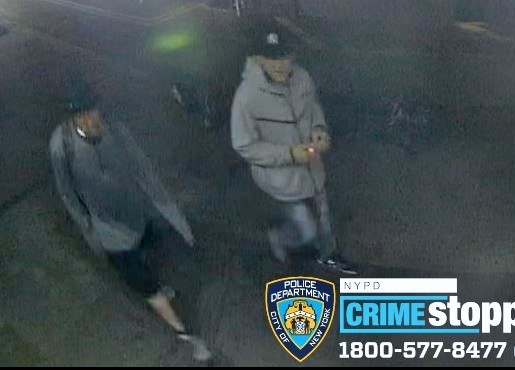 A surveillance image of the alleged suspects taken near Sammy's Halal, which was burglarized last month. (Courtesy N.Y.P.D.)

BY THE VILLAGE SUN | A prolific pair of burglars cleaned out East Village eateries and stores during a three-month crime spree, racking up thousands of dollars in stolen cash and electronics, according to police.

All the burglaries were in the Ninth Precinct, except for the first one, which was in the Fifth in Chinatown.

In the first incident, on Sun., March 7, right before midnight, a man entered through the front door of Fong On grocery store, at 81 Division St., after breaking the lock, as another guy stood outside acting as a lookout. The burglar grabbed a cash register containing about $600, before fleeing north on Division St.

A few hours later, around 3:45 a.m., allegedly the same guy entered Tio Pepe restaurant, at 250 E. 14th St., again after breaking the lock, with his sidekick again acting as lookout. He stole the cash register, valued at $450, before fleeing eastbound on E. 14th St.

The day after that, Tues., March 9, just after midnight, the pair of perps hit Ramen Setagaya, at 34 St. Mark’s Place. Following the same M.O., they stole cash and electronics valued at $3,450.

Police provided surveillance video and photos from Sally’s Halal burglary. One of them wore a Yankees baseball cap.