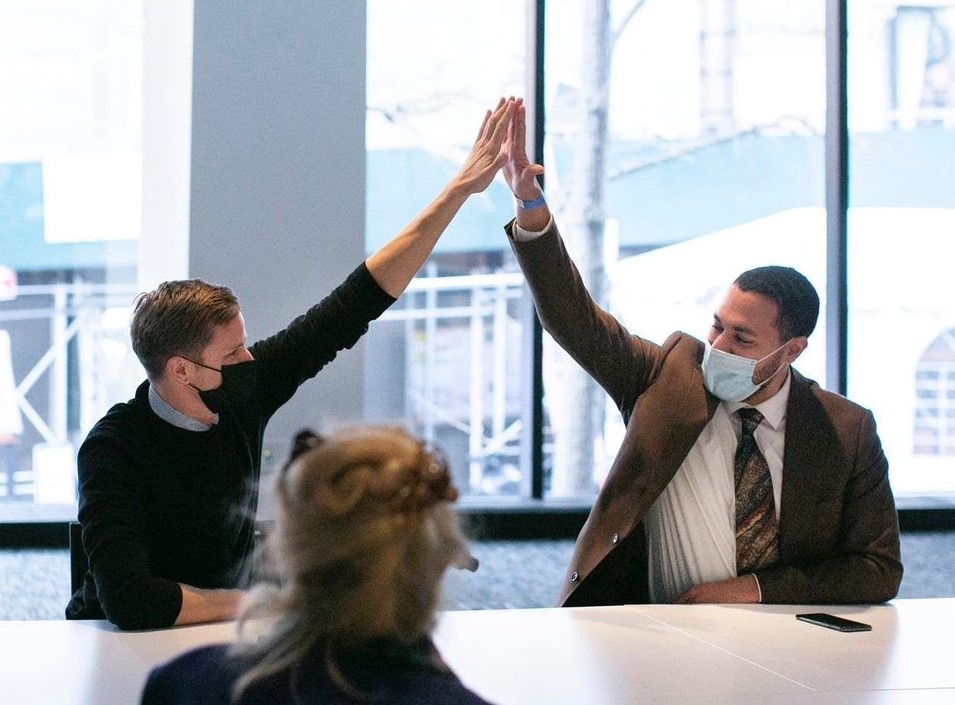 Erik Bottcher, left, and Christopher Marte are the co-chairpersons of the Manhattan City Council delegation.

BY THE VILLAGE SUN | New local Councilmembers Erik Bottcher and Christopher Marte have been appointed co-chaipersons of the City Council’s Manhattan delegation. They celebrated with an enthusiastic high-five.

Neither one, though, was appointed chairperson of a Council committee. According to a source, there’s speculation that this was payback for both of them having backed Francisco Moya in the race for Council speaker, which was won by Adrienne Adams. The source said Bottcher, in fact, badly wanted to be commissioner of the Committee on Sanitation and Solid Waste Management.

During his election campaign, Bottcher released a comprehensive sanitation plan. More recently, he has been highlighting the fact that garbage-truck pickups in Manhattan are barely above 50 percent of pre-pandemic levels, which helps explain the overflowing trash baskets.

But, in an interview with The Village Sun on Monday, Bottcher downplayed not landing a committee chairpersonship.

He noted that with only 30-some-odd committees but 51 councilmembers — including returning members who have seniority — it’s just a fact that not everyone is going to wind up chairing a committee.

Although not its chairperson, Bottcher is a member of the Sanitation Committee, as well as the Committees on Mental Health; Public Safety; Land Use (and its Subcommittee on Zoning and Franchises); Consumer Affairs; and Civil Service and Labor.

“I’m actually pretty happy with my committee assignments,” he said, adding that they are some of the “best committees” in the City Council.

“I’d rather be on a bunch of committees that I care about. I’m still going to lead on that issue,” he assured on sanitation.

Meanwhile, Marte is on some good committees, as well, including the Committees on Aging; Resiliency and Waterfronts; Civil and Human Rights; Education; Parks and Recreation; Landmarks; and Senior Centers and Food Insecurity.

Bottcher’s District 3 includes most of Greenwich Village, along with Chelsea and Hell’s Kitchen, while Marte’s District 1 covers Lower Manhattan, including Tribeca, Chinatown, the Lower East Side, Soho, Noho and some of the Village, including Washington Square.