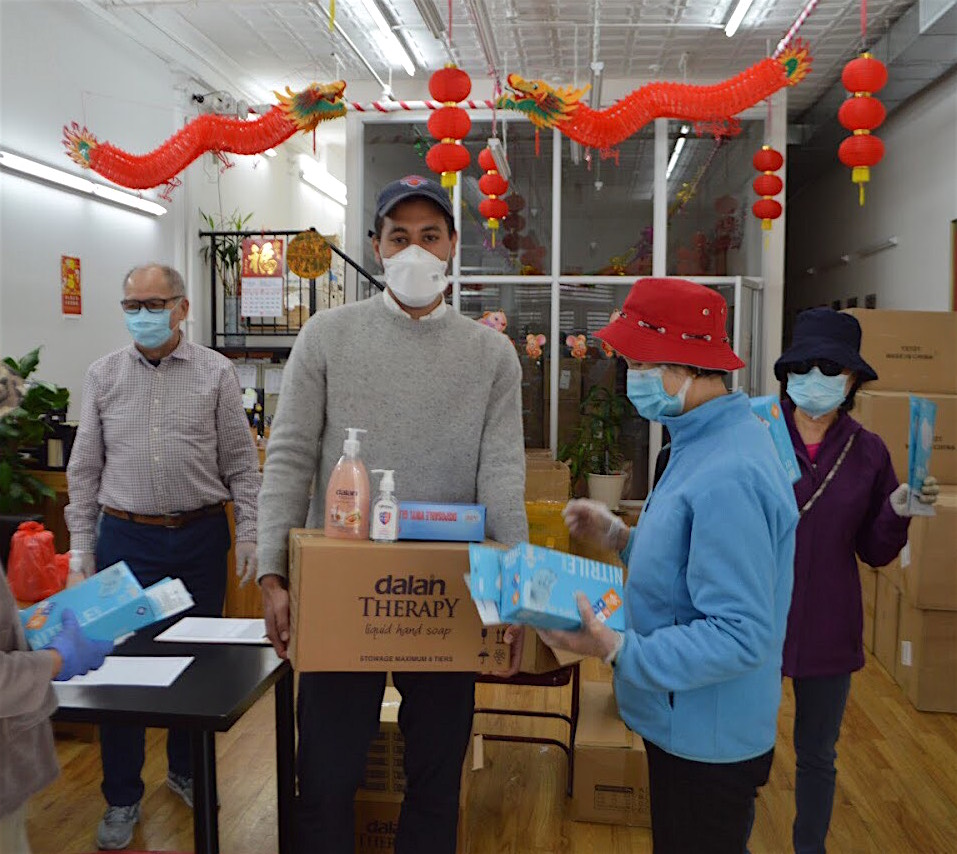 Council candidate Chris Marte, above, helped Scarr's Pizza, at 22 Orchard St., fundraise for PPE to be distributed to home health attendants with the Ain't I a Woman?! campaign. Marte's fundraising was on hold due to the pandemic, but he recently finished strong before the filing deadline. (Courtesy Chris Marte)

BY THE VILLAGE SUN | Downtown candidates for City Council are in the money.

Races for the First and Third Council Districts include three of the top five fundraisers for the 2021 elections.

Candidates recently filed their campaign finance disclosure statements with the city’s Campaign Finance Board, representing their fundraising and spending activity from Jan. 12, 2020, through July 11, 2020.

Erik Bottcher, running to succeed his term-limited boss, Council Speaker Corey Johnson, in District 3 (part of Greenwich Village, Chelsea, Hell’s Kitchen), raised the most of any City Council candidate in the city, $114,356. After spending more than $4,600 of that, he currently has $109,703 on hand.

Village District Leader Arthur Schwartz missed this latest filing deadline, which was Wed., July 15. But he confirmed to The Village Sun that he definitely still does intend to throw his hat in the ring.

“I hope to file with the Campaign Finance Board tomorrow or Monday,” he said Thursday night, “and will then announce my campaign with a blast e-mail to 16,000 voters in the district as soon as my contribution link is live.”

Meanwhile, in Council District 1 (Lower Manhattan, Lower East Side, part of Greenwich Village, Soho, Noho, Tribeca, Chinatown), after three terms in office, Margaret Chin will be term-limited at the end of next year.

State Committeeman Chris Marte — who nearly upset Chin in the primary election three years ago — raked in the second-most funds of any City Council candidate, raising $80,715. He has $70,306 still on hand.

However, not too far behind him, another contender, Maud Maron raised the fifth-most funds among all Council candidates, $68,798, with $63,949 still on hand. Maron is a Legal Aid attorney, Community Board 2 member and president of Community Education Council District 2.

Meanwhile, Gigi Li, Councilmember Chin’s chief of staff and a former chairperson of Community Board 3, has not exactly been going gangbusters fundraising, at least not yet. She has $19,322 on hand, after having raised $20,761.

In District 2 (East Village, part of the Lower East Side, Gramercy, Madison Square, Union Square, “Curry Hill,” Kips Bay), incumbent Carlina Rivera also is among the top fundraisers in Council races citywide. She currently has a $52,322 war chest after raising $62,979.

Rivera was the only candidate for District 2 to file a campaign finance disclosure statement by the July 15 deadline. (The next filing deadline is in January.)

Meanwhile, Marte issued a press release trumpeting that his campaign was “fully funded a year ahead of election” — meaning he is set up to receive the maximum amount of public matching funds from the C.F.B.

Marte noted that while he suspended fundraising during the peak of the coronavirus pandemic, in the past few weeks he got back in gear and was able to accumulate support from a wide range of supporters, “from local artists to waiters at Jing Fong.”

The state committeeman claimed that, among the three District 1 Democratic candidates, he raised the most from in-district donors, and also is the only candidate not to have received any donations from real estate.

“The stakes are high in this election, and residents of District 1 realize that,” Marte said. “We need a voice to represent every neighborhood of this diverse district instead of pitting people against each other. We can build more affordable housing without displacing long-term residents. We can end mass incarceration without building new jails. We can protect our entire waterfront without steamrolling community input. These are only visionary ideas because this district has been corrupted by special interests for too long.”

As for Schwartz and the District 3 race, he gave The Village Sun a preview of some of his main campaign planks in advance of his official campaign announcement.

“I am working on my announcement statement,” he said. “It will focus on five issues: Corey and Erik’s failure to deliver on the defund the police demand with a real plan to restructure policing in New York City and distribute  money to programs that will undercut crime; a demand to keep the M.T.A. buses free, like they are now, and put city money into NYC Transit, so fares can go down; a demand to allow New York City Housing Authority residents to deduct a day of rent for every day that their elevators don’t work or their garbage compactors are broken; fully funding public schools and creating sources of money for that in the city; and making community boards a mandatory and not an advisory step in the ULURP process.”

ULURP refers to the Uniform Land Use Review Procedure, a public review process — often lasting around seven months — for land-use applications for projects in New York City. Local community boards currently weigh in on projects in their districts during ULURP, but the boards’ opinions are advisory only, not binding.