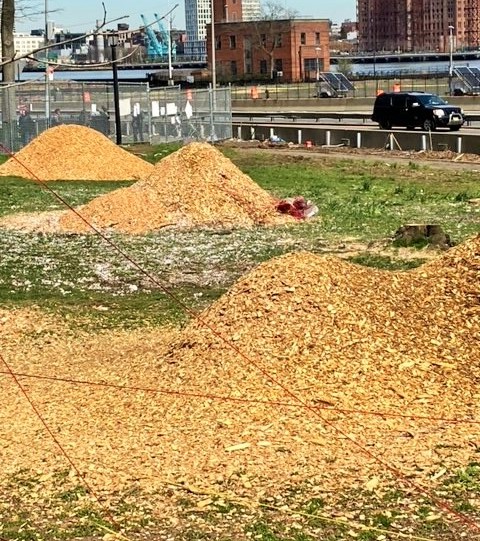 Reduced to woodchips: All that was left of the cherry trees after the workers finished their job on Monday. Some strands of red and yellow yarn from George Hirose's "art intervention" two weekends ago are visible in the foreground. (Photo by Tommy Loeb)

BY THE VILLAGE SUN | Workers cut down the beautiful grove of cherry trees in Corlears Hook Park’s Cherry Hill on Monday. They had backed off Saturday in the face of protests that saw the arrest of Reverend Billy, the protesting performance-art preacher, and another park activist.

On Monday, poet Eileen Myles was also arrested while trying to block the chainsawing of the Lower East Side Park’s trees. But the workers finally succeeded in their destructive mission, felling the small forest of cherry trees.

The trees had only just recently started blooming.

The start of the destruction of East River Park and Corlears Hook Park was rammed through in the final days of Mayor de Blasio’s administration. The $1.45 billion coastal-resiliency project was overwhelmingly approved by the New York City Council, including local East Side Councilmembers Carlina Rivera and Keith Powers, as well as then-Councilmember Margaret Chin.

Opponents, however, favored a previous, more low-impact resiliency plan for all of East River Park that did not require destroying the existing waterfront parkland and would have instead just created a berm along the F.D.R. Drive to contain floodwaters.

Meanwhile, park defenders sadly wonder how nearby Cherry Street, along Corlears Hook Park’s north side, can even continue to be called that now that all the Cherry trees for which it was named have been cut down.