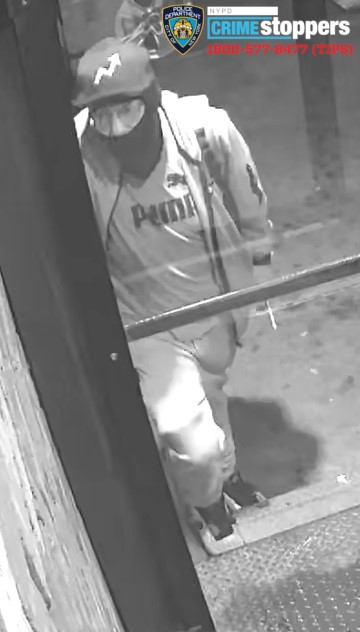 The crook reportedly hit multiple buzzers to get into the vestibule. (NYPD)

BY THE VILLAGE SUN | A package thief in Greenwich Village attacked a superintendent who tried to stop him, before fleeing empty-handed, police said.

According to cops, on Wed., Dec. 7, around 5 p.m., a stranger entered the residential building at 75 Bleecker St., between Broadway and Mercer Street, after ringing different apartment buzzers to gain entry. Once inside, he grabbed numerous packages from the hallway’s floor.

When the building’s 69-year super confronted the intruder while wielding a bat, the younger man threw the packages at him, striking him on the side of the face, and grabbed the bat away from him. The super fell to the floor. The crook continued to punch him in his head while menacing him with the bat and a knife but then fled without the packages.

The suspect is described as roughly in his 40s, 5 feet 9 inches tall and weighing 175 pounds, with a medium build and last seen wearing a red sweatshirt, a shirt with “PUMA” on it chest, red sweatpants, black-and-white sneakers, a black baseball hat with a distinctive squiggle arrow on its front, a black balaclava-style ski mask and eyeglasses.