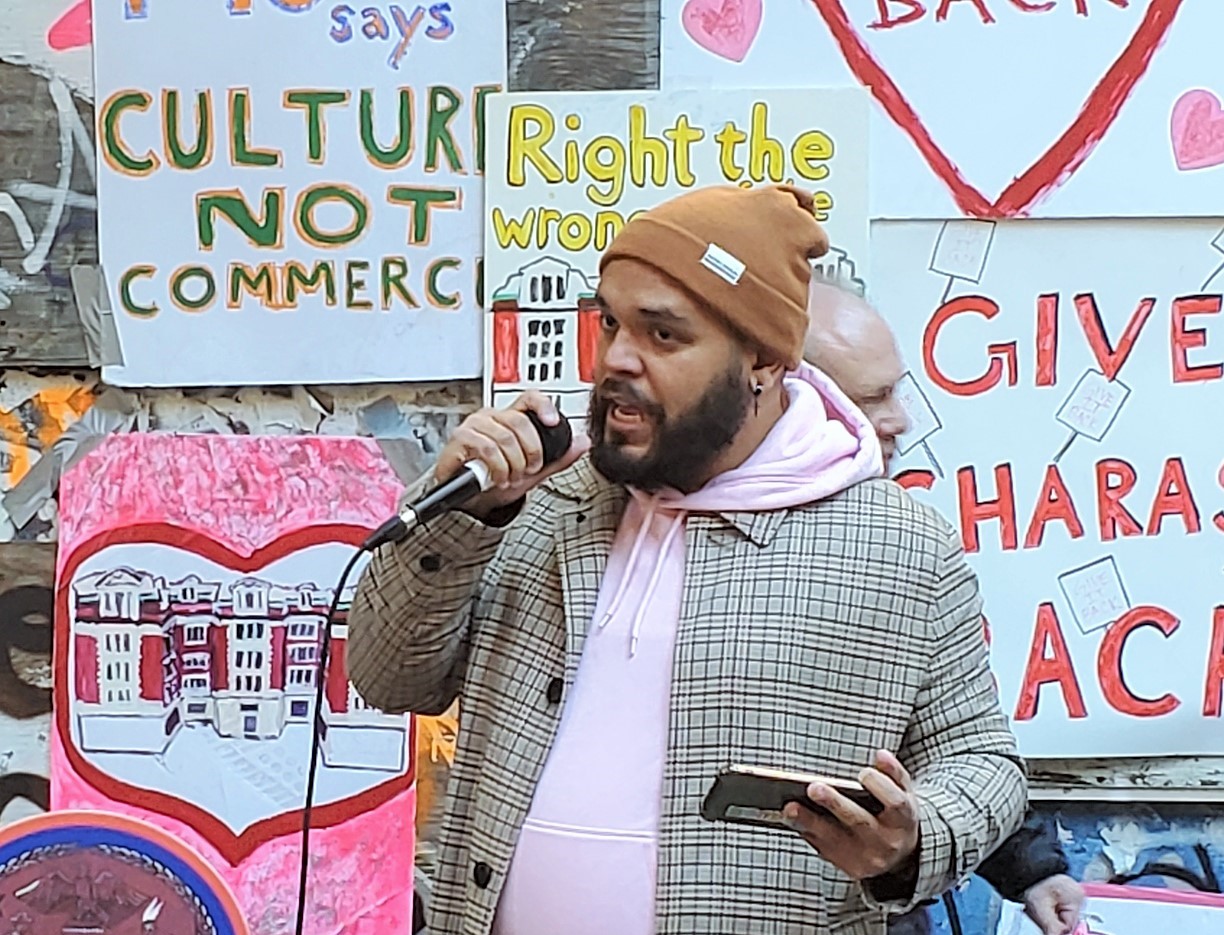 Then-District Leader John Blasco emceed a rally outside the embattled old P.S. 64 (CHARAS/El Bohio), at Ninth Street and Avenue B, in November. (Photo by The Village Sun)

John Blasco recently officially stepped down as the male Democratic district leader for the 74th Assembly District, Part A, which includes the East Village.

The reason? No, not some political scandal. But because he moved to Brooklyn to live with his partner.

District leader is an elected but unsalaried political position. Getting voters to turn out at the polls and monitoring activity at the polls on Election Day are among their main duties.

District leaders, however, must live in the district they represent. As a result, Blasco had to give up the position.

A Lower East Side native, the 32-year-old was most recently residing in the Riis Houses, east of Avenue D.

OFF THE Q! It’s bittersweet to announce that I have officially moved out of the LES and into Midwood, BK! In addition to my move, I will be stepping down as the District Leader of the 74AD. I was elected as DL in 2019 and it has forever changed my life. I’m proud of my work. pic.twitter.com/nLgosfS9cd

Blasco was elected district leader in 2019. The post, with a two-year term, is often seen as a springboard to higher office, such as City Council. Carlina Rivera, who currently represents District 2, was a district leader before winning election to the Council, as was her predecessor, Rosie Mendez.

But, again, you have to live in the district to run for election there, so Council District 2 is now off the table for Blasco. He’s still chief of staff, though, for Assemblymember Harvey Epstein, who represents the 74th Assembly District. Before that Blasco was a staffer in Rivera’s office, after having worked for Mendez.

“I love serving my community, and I don’t think I have to do that in any role higher than district leader to do that,” Blasco said. “It’s a personal thing that you have to figure out for yourself.  I’m still Harvey’s chief of staff, so will serve the district.

“There was a time when I thought of running for City Council,” he admitted, though adding, “I don’t need the title of councilmember to serve my neighbors. I’m proud of all the work that I’ve done in the community and as district leader.”

One noteworthy feat during his district leader stint that he takes credit for was helping get the Board of Elections to put the application for 17-year-old poll workers online. The city only had a paper version. But Blasco felt that, in this day and for that demographic, it was a glaring omission not having an online version.

The young politico got his start in local activism as the lead organizer for FIERCE, a group that, at the time, was fighting for the rights of L.G.B.T. youth in the West Village and Hudson River Park, especially at the Christopher Street Pier (Pier 45). He left FIERCE in 2014 to work for then-Councilmember Mendez.

Formerly based in Chelsea, FIERCE now has its office in the Bronx.

“FIERCE definitely inspired me to get into politics,” Blasco said.

In terms of his family unit, it inclues himself, his partner, Josh, who works for the Callen-Lorde Community Health Center, and their mini-Schnauzer.

“I’m in love. I’ve been with my partner a little more than two years now,” Blasco said, happily.

There are no plans for kids at the moment — at least not of the two-legged kind.

The next district leader election will be in 2023. In the meantime, the Democratic County Committee has the option of selecting a replacement to fill the empty position in the interim.