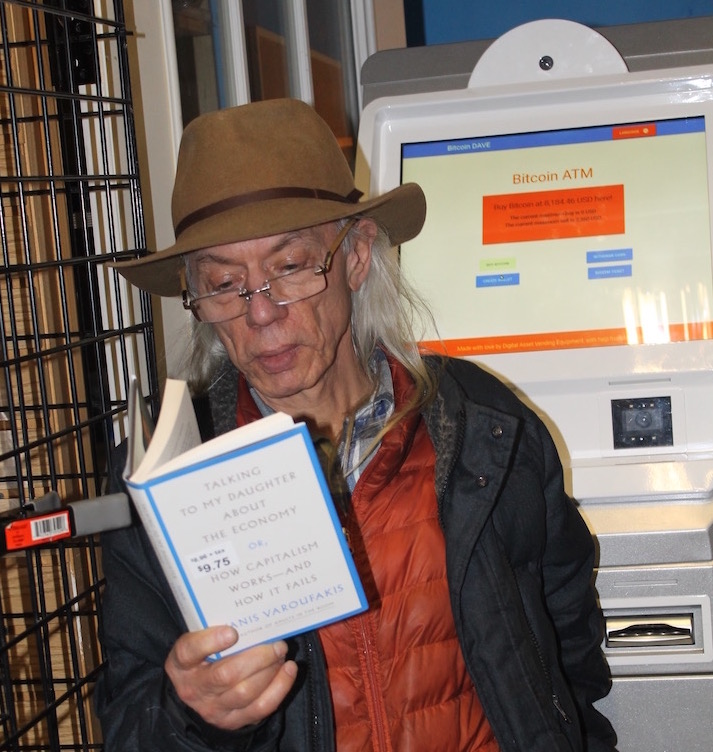 BY LINCOLN ANDERSON | The latest addition to Unoppressive Non-Imperialist Bargain Books is a “bit” quirky…but then, so is the store.

Currently, there’s a comic-book shop on one side of the place. In a front window a fortune teller holds court, her table decked out with exotic psychic totems.

Four years ago, during the standoff at Standing Rock over the Dakota Access Pipeline, Drougas rented out a small back room to Jean-Louis Bourgeois, the scion of famed sculptress Louise Bourgeois, as the Village activist’s base of operations for the “water protectors” movement.

As one might gather from his store’s name, Drougas’s politics and outlook are decidedly alternative. So is the shop’s latest addition — as in, alternative currency.

About two months ago, he added a no-fee bitcoin ATM to the place. It stands in the rear, near the trap door that leads to a narrow, rickety staircase down to a cramped bathroom in the old South Village building.

Drougas said people typically use it to transmit bitcoin to family overseas, including recently to Vietnam, Syria and the Dominican Republic, among others. Or tourists use the ATM to extract bitcoin here.

While other bitcoin ATMs take bitcoin, they don’t give it. Uniquely, this particular machine both buys and sells the digital dough.

While cash ATMs are generally (though, not always) fast, it can take a little time to complete a transaction with a bitcoin version.

The bookstore proprietor doesn’t own any cryptocurrency himself — though he joked he wished he had bought some before. As of right now, one bitcoin is worth roughly $10,000 in U.S. currency. There was a time, however, when one bitcoin equaled $1.

“One bitcoin used to buy a cup of coffee a few years ago,” he quipped. “Today it’s worth so much.”

Drougas doesn’t get anything from the transactions beyond the rent for hosting the machine.

He wryly posed for a photo in front of the ATM with a book he recently enjoyed reading: “Talking to My Daughter About the Economy: or, How Capitalism Works — and How it Fails,” by Yanis Varoufakis, Greece’s former finance minister. You can buy the book in his store.

The ATM is owned by Nick Spanos, a local bitcoin pioneer.

“We built it,” Spanos said.

His company has nearly 100 of the machines, though they’re not all stationed in New York City. Unlike traditional ATMs, there is no physical money inside of them. The user sends or receives bitcoin via a “digital wallet.”

“I can leave a machine out for months and don’t have to touch it,” Spanos explained, in a phone interview. “Other machines, they have to touch every day.”

Spanos opened the first bitcoin exchange in the world, on Wall St., seven years ago. He’s featured in the 2016 documentary film about the advent of digital currency, “Banking on Bitcoin.”

He had a real estate business nearby on Prince St. for 20 years.

“The real estate business feeds me,” he quipped. “The tech business undresses me. The technology business is my passion.”

Spanos was introduced to the idea of alternative currencies when he did IT and ran phone banks for Ron Paul’s presidential campaigns in 2011 and 2007.

“Then it went from being back alley,” he said. “We opened the bitcoin center in 2013. Wall St. people showed up.”

Meanwhile, the debate continues in many quarters on whether cryptocurrency will be a boom or bust. Spanos is strongly betting on the former.

Cryptocurrency is especially valued where traditional currency has little to no value, he explained. In Venezuela, for example, worthless bolivar bills are now being used to fashion arts and crafts.

“In Venezuela, they want bitcoin,” Spanos said. “Bitcoin goes down, but it always goes back up. You can have someone in an African village start a business, they get paid right away [with bitcoin].

“Over here, the dollar’s the strongest currency in the world,” he said of the United States. “So this is the last place people would feel they need a competing currency. These other countries, they just print, print, print money.

“In Zimbabwe, with rampant currency inflation, they want it,” he said of bitcoin. “It will keep governments from printing too much money and debasing their currency.”

Spanos was also thinking globally in 2005, when he created New York City’s only relief center for the Indian Ocean tsunami that killed a quarter of a million people. He collected medical equipment and tents, among other things, at the Canal St. center.

“Had to do something,” he said. “I was watching TV and seeing all the bodies.”