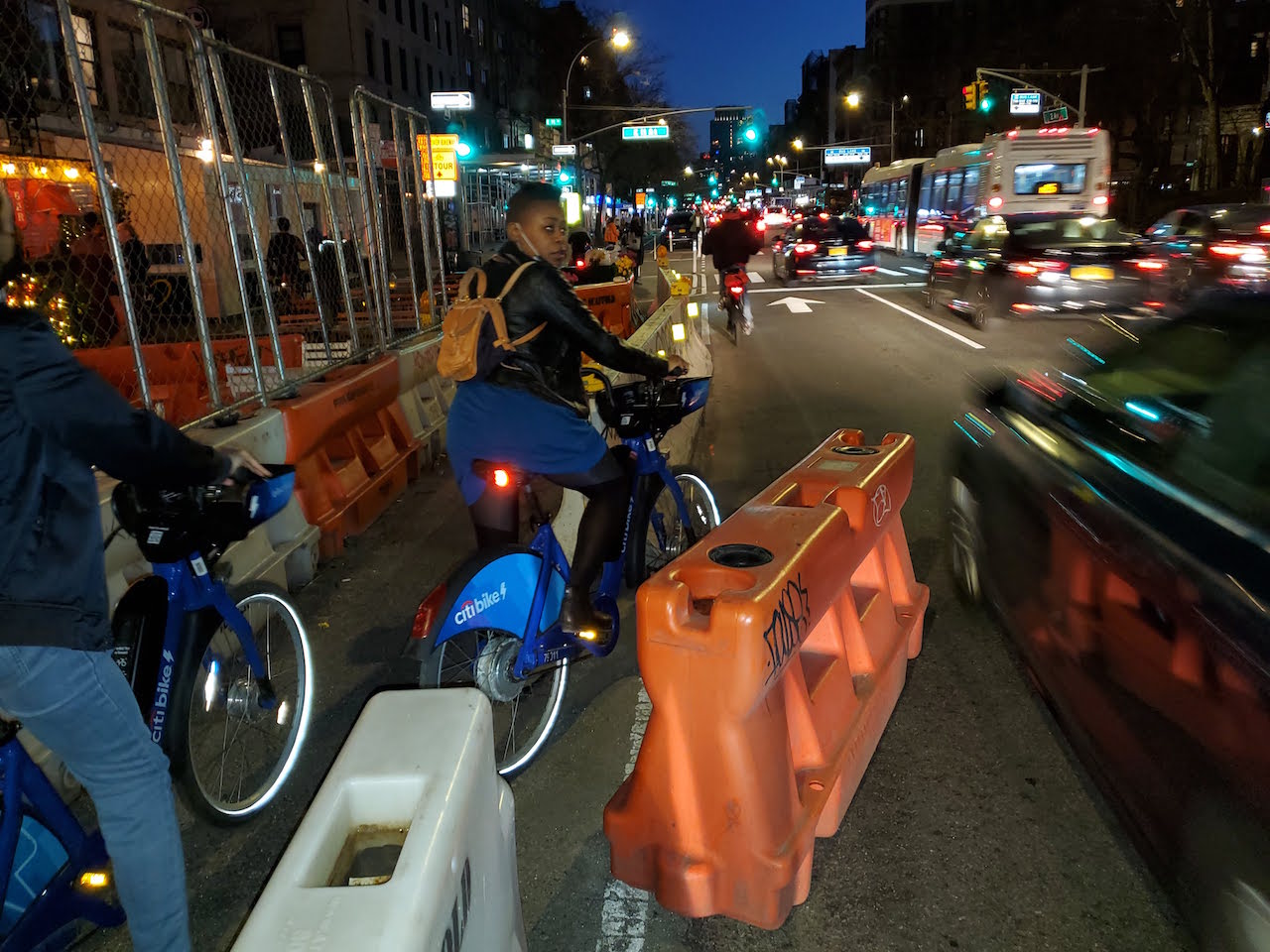 Cyclists were dangerously forced to merge into car traffic. (Photo by The Village Sun)

Bike lane was…gone with the wind

BY THE VILLAGE SUN | Warning about high winds Upstate on Friday, Governor Cuomo ordered a vaccination center in Rochester closed for the day. But he probably didn’t foresee this particular scenario in the East Village. …

In the early evening, around 7:30 p.m., cyclists zipping downtown in the Second Ave. bike lane found the lane pinched closed at E. 11th St. by large plastic construction barriers. At a distance before the lane narrowed, an opening had been created — like a door swung open — to let the cyclists detour onto the avenue amid the car traffic.

It was a dangerous situation, presenting various ways cyclists could get hurt. The bikers could smash into the closed-off end of the bike lane. They could get into an accident — or worse — when merging into car traffic. Or, as happened to one cyclist as The Village Sun was watching, they could make the turn for the temporary opening too late and too fast and wipe out.

Julie R., 31, a teacher at Murry Bergtraum High School down by City Hall, didn’t quite make a clean enough turn through the sudden detour point and hit a concrete Jersey barrier that, along with the plastic barriers, was also there. The impact rammed her bike into the side of her groin, and she fell off of her ride, luckily not being hit by oncoming car traffic.

She was coming from her friend’s exercise class, heading to the Williamsburg Bridge on her way back home to Williamsburg.

“This wasn’t like that last Friday,” she said, with frustration, referring to the dead-ended bike lane, as she stood bent over, recovering from the spill. She declined to have her photo taken.

Though sore from her fall, she eventually gamely got back in the saddle and pedaled off.

At first glance, one might assume that the restaurant at the spot, Numero 28 Pizzeria, had greedily expanded its outdoor dining area by pushing it into the bike lane, literally creating the conditions for an accident waiting to happen.

But two waitresses told The Village Sun that they had been battling the high wind all day, which had been pushing the plastic barriers to the west and into the bike lane.

“The wind pulled it,” one of them said, saying she had tried to straighten out the barriers before. “I’ll do it right now.”

As a reporter watched, she shoved the interlocking modular barriers back to the east, opening up the closed bike lane once again. After she had finished, another waitress ran out to further explain the situation.

The barriers are there — creating a protected bike lane away from the curb — because there is a construction project just to the north.

A reporter tried to move one of the barriers and they were surprisingly light; a nudge with a knee moved them. So the waitresses’ story seemed plausible.

So, in this case, it was true…as Bob Dylan sang, “The answer, my friend, is blowin’ in the wind.”