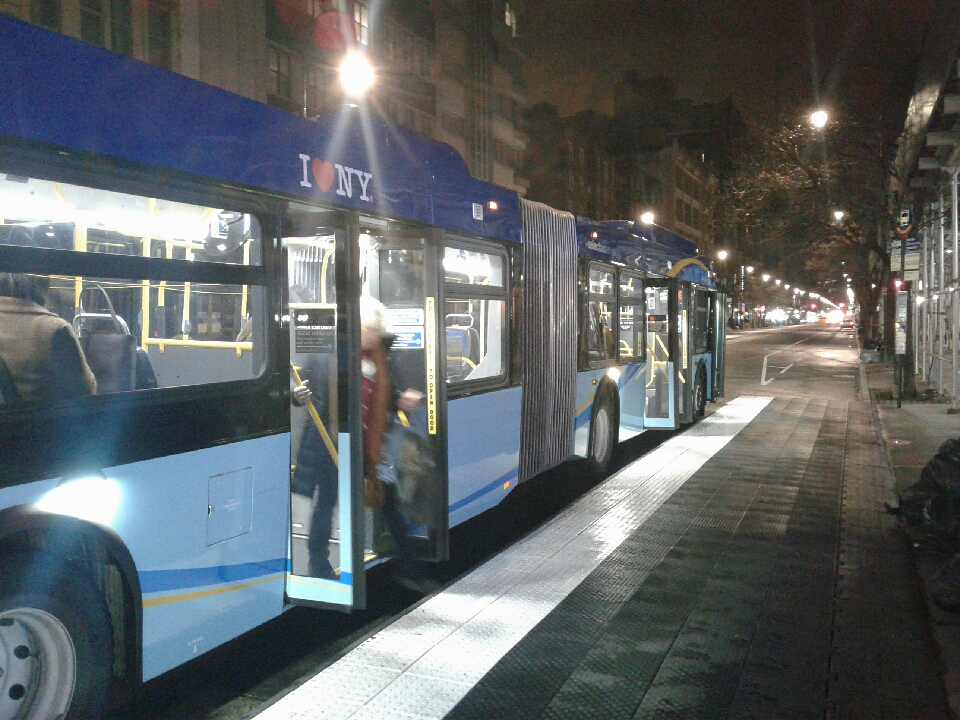 M14 Select Bus Service stopping at an extended boarding platform at 14th St. and Fifth Ave. The lawsuit plaintiffs are not challenging the new boarding platforms, saying they do not fall under a required environmental review. (Photo by The Village Sun)

Battle of the busway rages on; Plaintiffs file court appeal

On Mon., May 11, Village attorney Arthur Schwartz filed an appeal in New York State Appellate Court, seeking to end both the 14th St. busway and the new crosstown bike lanes on 12th and 13th Sts.

The lawsuit is filed against one person only — Polly Trottenberg, as commissioner of the city’s Department of Transportation.

With New York City on lockdown due to the coronavirus pandemic, mass transit use has plummeted. Yet, the 14th St. busway continues operating — and fueling local opposition.

The subways — which were seeing homeless “shantytowns” pop up inside of them — are now being cleared of riders every morning, so that the cars can be disinfected.

“But now all the homeless people are sleeping on the buses,” Schwartz said. “Nobody’s taking Uber either. Who knows who was sitting in that seat before you and if they clean it?”

Indeed, there is a fear among many that the city’s mass transit system is a vector for spreading coronavirus in the Big Apple, the pandemic’s U.S. epicenter. As of April 22, more than 80 Metropolitan Transportation Authority workers had died from COVID-19.

One thing is clear, Schwartz said, “The world is going to change.”

Meanwhile, the lawsuit appeal argues that because the city violated the requirement to do an environmental review (under the State Environmental Quality Review Act) for the novel transit plan, the busway and bike lanes must be stopped.

Simply put, Schwartz said, “They never did the proper environmental assessment for a project of this size.”

The suit describes the busway and crosstown bike lanes as two “intertwined” parts of the city’s mitigation scheme that was originally proposed in response to the planned full shutdown of the L train for repairs.

After Governor Cuomo’s intervention, the full L-train shutdown was scaled back to a partial shutdown (the L tunnel repairs recently were completed), but the city — flipping the script — then argued that the M14 crosstown bus was too slow, so the busway was still needed.

The busway was launched in October 2019 as an 18-month pilot project, but not before Schwartz — representing some of the same plaintiffs as the current ones — delayed its start a couple of times. Schwartz, who lives on W. 12th St., is once again arguing the suit pro bono.

The city announced the plan in April 2019. Schwartz got a stay in court in June 2019, blocking the busway’s launch. The stay was lifted, then reimposed, then lifted again in September 2019, before the busway went into effect shortly thereafter.

The first-of-its-kind program bans cars from 14th St. between Third Ave. and Ninth Ave. between 6 a.m. and 10 p.m. seven days a week. Only buses and trucks are allowed as through traffic during those hours. Cars and taxis can come onto the crosstown boulevard but must then take their first right-hand turn off of it.

The lawsuit notes the plaintiffs fear the scheme will become permanent.

“The City called this an ‘18-month pilot project,’ but given its determination since 2017 to impose these changes, only because of the L-train shutdown, there is no reason not to believe that a permanent change is what is in store,” the lawsuit predicts.

The suit pegs the plan’s genesis on Transportation Alternatives.

“In April 2017, a bike-riding advocacy group, Transportation Alternatives, with whom Commissioner Trottenberg is closely associated, announced the winners of a contest about how best to mitigate the effects of the L-Train shutdown,” the lawsuit states. “The contest winner proposed, among other things, a ‘Busway’ running across 14th Street, which would bar all traffic other than buses.”

Cuomo scaled back the L-train repairs to only a partial shutdown, but D.O.T. continued to push the busway plan as critically needed.

“Its new rationale was a need to ‘speed up’ bus service on 14th Street,” the suit states of D.O.T., “even though 14th Street was one of two crosstown streets in Manhattan that had a subway line running across almost its entire length.”

Meanwhile, the suit notes, from the start, neighboring residents feared that barring cars from 14th St. would push the vehicles onto their side streets — mainly, 18th, 19th, 20th and 12th and 13th Sts. (Union Square Park blocks 15th through 17th Sts. from being good east-west streets for through traffic, and streets in Greenwich Village and the East village don’t provide direct connections to West St. or the F.D.R. Drive until one gets down to Houston St., while Stuyvesant Town and Peter Cooper Village block access to the F.D.R., the suit notes.)

“Under the Busway Plan, 12th Street, 13th Street, and 17th to 20th Streets are the only ways to get across Manhattan between Houston and 23rd Streets,” the suit states. “Residents of those…streets and neighboring streets have grave concerns regarding the rerouting of commercial traffic (i.e., vans and trucks that are not planning to travel all the way across 14th Street), livery vehicles, and other passenger vehicles onto those streets. All of these streets are narrow mixed-use/residential streets that are already constantly backed up with traffic. Because of existing building construction, cars, bikes and delivery trucks, traffic on these streets is already often at a virtual standstill.

“Twelfth and 13th Streets, with a bikeway…have such a narrow car lane that a car or taxi stopping to pick someone up will stop traffic entirely,” the suit adds. “An oil delivery truck will shut down the block for 30 to 60 minutes unless it parks, unlawfully, in the bike lane.

The bike lanes and accompanying street reconfigurations — taking away 7 to 8 feet of roadway for vehicle traffic — on 12th and 13th Sts. are also safety risks, the suit argues, since these streets are used by ambulances from the Lenox Health Greenwich Village emergency department that also travel across town to Beth Israel Hospital, as well as by fire trucks from the firehouse at W. 10th St. and Sixth Ave.

“Blocking or causing traffic jams on those streets causes a serious, if not life-threatening, hazard,” the suit warns.

“No new rationale has been stated for the two bike lanes constructed before the [L-train] shutdown was called off, which were supposed to be ‘temporary’ and were designed to serve 2,500 to 5,000 L-train riders who chose to bicycle across Greenwich Village,” the suit notes.

The suit adds that D.O.T. said the main traffic problems on 14th St. were during the morning and evening rush hours (8 a.m. to 10 a.m. and 5 p.m. to 7 p.m.), yet the current no-cars pilot plan extends from 6 a.m. to 10 p.m. Village and Chelsea opponents of the plan have said that, at the very least, the busway could be scaled back to only during rush hours.

In addition, the community lawsuit also alleges that the increased bus speed that D.O.T. sought on 14th St. was likely already achieved after the city put Select Bus Service into effect just before the busway’s start, along with banning left turns on 14th St., making University Place between 14th and 13th Sts. southbound and implementing other traffic changes.

As Schwartz put it, “The numbers show the biggest improvement [in bus speed] when they went to S.B.S., and a smaller improvement after the busway started.”

The plaintiffs do not oppose S.B.S. on 14th St.

The city now has until Aug. 12 to respond to the plaintiffs’ appeal, and the case will be argued in September at the earliest, according to Schwartz. At that point, the busway pilot project would still be operating, with six to seven months left to go.

Transit-advocacy groups slammed the attempt to continue the litigation.

“As our city faces a public health crisis and massive budget cuts, it’s a shame that Mr. Schwartz continues to target hardworking New Yorkers with his frivolous lawsuits,” said Danny Harris, executive director of Transportation Alternatives. “Our transit system is a lifeline for essential workers. Bus-priority corridors like 14th St. have improved the quality and speed of bus service, and ought to be the standard for every community.”

The Riders Alliance accused Schwartz of pursuing the suit because of his “ego.”

“Schwartz’s appeal is misguided on the facts and on the law,” Danny Pearlstein, the group’s spokesperson, said. “He should spend his time advancing the interests of bus riders not vindicating his own ego.

“The project was meticulously vetted by teams of risk-averse lawyers at the City and the M.T.A. Two Supreme Court justices in Manhattan and Queens have ruled against his arguments.

“The busway itself is enormously beneficial to tens of thousands of bus riders, primarily low-income New Yorkers of color, large numbers of them essential workers. Dramatic speed improvements were followed by major growth in bus ridership.

“In the age of COVID, Mayor de Blasio should advance projects like the busway on busy commercial corridors citywide,” Pearlstein said. “With the M.T.A. facing a financial quagmire and several hundred thousand daily riders still depending on buses, neither the agency nor New Yorkers can afford getting stuck in slow traffic.”