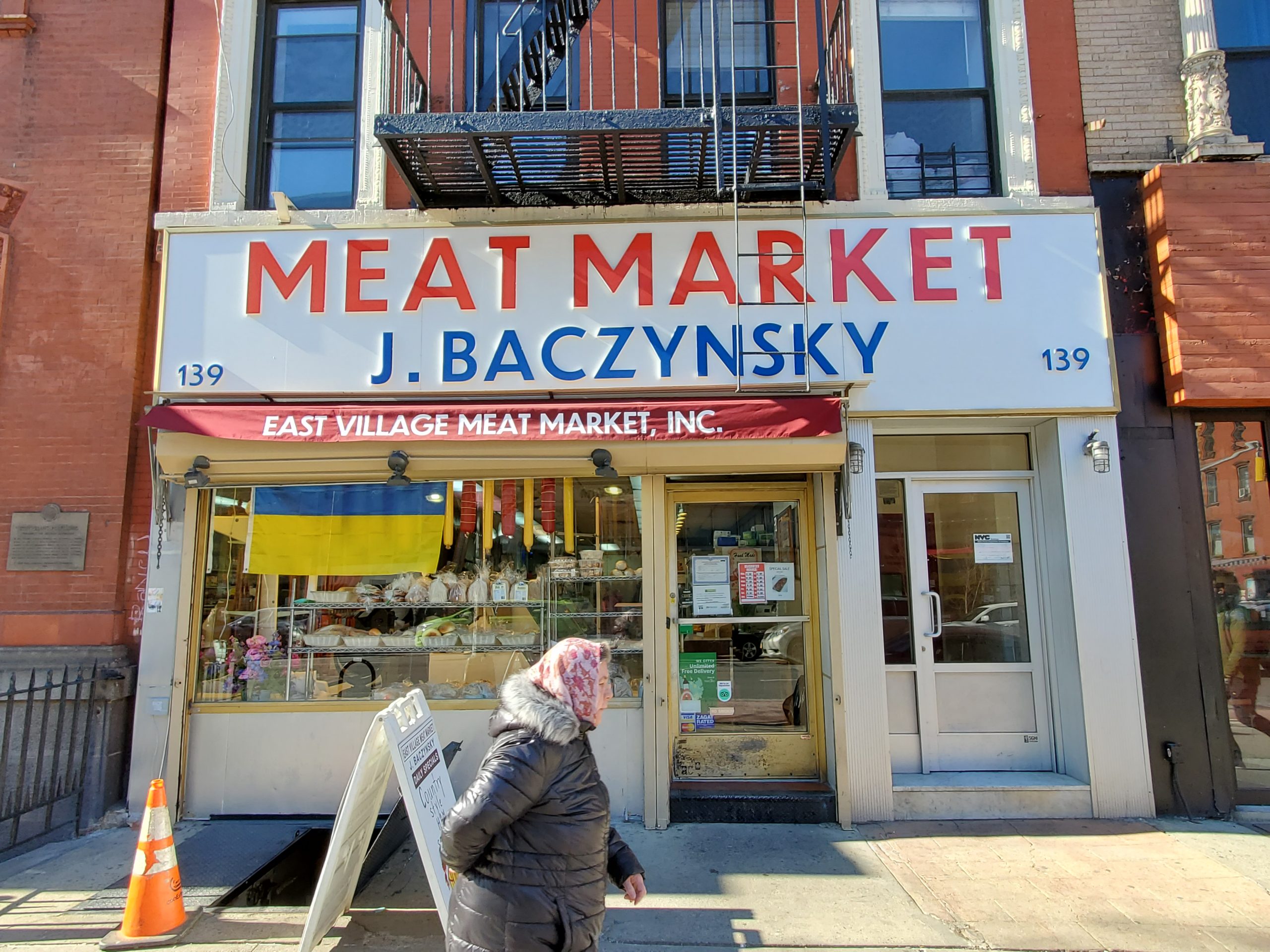 The East Village Meat Market is one of the Ukrainian businesses and institutions along Second Avenue. (Photo by The Village Sun)

BY LINCOLN ANDERSON | As the tense situation in Ukraine continues to rivet the world — with a Russian invasion said to be “imminent” — the American Ukrainian community is feverishly mobilizing, protesting and trying to avoid an unimaginable calamity.

The East Village remains a traditional bastion of the community, particularly along Second Avenue, which is prominently dotted with Ukrainian businesses and service associations.

On Tuesday afternoon, The Village Sun dropped by the Selfreliance Association of American Ukrainians, a day center between E. Fifth and Sixth Streets. The paper expected to find an anxious group of locals — albeit enjoying sandwiches, cookies and coffee — to get their thoughts on the nerve-racking international situation, which some fear could spark World War III.

A small group was there. But also among them was Walter Zaryckyj (pronounced “Zarisky”), the executive director of the Center of U.S. Ukrainian Relations and a former longtime political-science professor at New York University. Zaryckyj, 70, who grew up in the East Village and still lives there — “I’m a prisoner of Second Avenue,” he quipped — proceeded to give a reporter a full presentation of the possible scenarios that could play out, likening Putin to a crafty, cold-blooded chess grandmaster. He also provided historical context, explaining how the current situation in Ukraine goes back to the Holodomor, or the so-called Soviet Famine, of the 1930s, a man-made food shortage that killed millions.

Drawing a small map of Ukraine in his notebook, he then sketched out the various scenarios. He frequently punctuated his remarks by pounding the map with his blue-and-yellow pen in anger and defiance. The sit-down lasted almost an hour. (See video below.)

As Zaryckyj explained it, he and other Ukrainian experts feel there are five potential “variants” that Putin might conceivably use against the country. These range from a combination of land and amphibious assaults to cyberattacks, the latter which, according to news reports, have already started.

Although the Russian strongman has amassed at least 150,000 troops on Ukraine’s borders, that won’t be enough if Putin plans a full invasion, Zaryckyj stated. That would require an occupation force of 500,000 troops, he explained. Putin doesn’t have that many troops ready, though, and would have to move them in from afar, plus do a troop call-up.

Meanwhile, it would be a deadly mistake for Putin to try to invade western Ukraine, Zaryckyj warned.

“That place, with the Carpathians [mountains] would be one hell of a fortress redoubt,” he said. “Kyiv has 3 million people. Everyone is armed. Coming into Kyiv — with 3 million people — are you crazy? Babushka have rifles. There are 70-year-old women who are standing there practicing how to fight.

“It’s one thing to go and it’s another thing to hold,” he said. “You know who found that out? A much stronger and more sophisticated force called the United States in both Iraq and Afghanistan. Afghanistan had, what, 50,000 insurgents at best? And Afghanistan after 20 years, we couldn’t hold it?

“Can you imagine a million Ukes, man, telling Putin this?” Zaryckyj said, brandishing his middle finger at the video camera.

“What we’re worried about is the fifth variant,” Zaryckyj conceded. “What’s playing out right now, we believe, is number five. The fifth variant, he already claims the area [with separatists], two little breakaway republics. If they’ve been declared independent…the next step, we believe, will be to annex this. March their regular troops in there. Saying that these have united, the same way they did with Crimea. Hold a referendum within a day or two: ‘We love it, they love us.’ And stuff like that. … They’ve already passed half a million Russian passports in those breakaway republics. … These are the Russian ethnics. Most of the Ukrainians in that area have been chased away. … If there is any move by our army, he will say, ‘I’m there to protect the Russian people.’

“The Russians love to play chess,” he noted. “This is a chess move we’ve seen them do before.”

These potential breakaway areas in a region called Donbas, he said, were the most ravaged by the Holodomor, and were then purposefully populated with Russian ethnics.

“We have seen one genocide of our people, in the 1930s,” Zaryckyj said.

He likened the crafty expansion to Hitler’s similar moves into areas bordering Germany in the mid-1930s under European “appeasement.”

“Russia is grabbing,” the scholar stated. “By grabbing, he can go home and say, ‘I brought another piece of Russia back.’ He’s doing the salami or baloney sort of approach, one slice at a time.”

However, what the Russian leader ultimately wants is clear, the East Village intellectual said.

“He wants the Soviet Union back,” he said. “He wants [NATO] to pull the troops out of Poland, Romania and Baltic states. Go back to the protocols of 1997. … Which means, essentially, abolish the eastern part of NATO. That’s basically what he wants. Because everything after 1997, that’s the 10 Eastern European countries getting in [to NATO]. … The Black Sea…he knew that if Ukraine joins NATO, he doesn’t have access. It’s no longer a Russian lake. It becomes a NATO lake. And so, that’s what he’s been fighting. This is a big geopolitical and geostrategic thing because Russia needs the access. In order to do all the adventures in Africa that it’s doing and in the Middle East, it needs access through the Dardanelles Strait.”

When Ukraine achieved independence from Russia in 1991, it possessed one-third of the Soviet Union’s nuclear weapons. However, three years later, the new country agreed to destroy the armaments, or as he put it, “Ukes gave up their nukes.”

European leaders have called what could happen in Ukraine — Russia’s takeover of breakaway areas — an “intrusion,” as opposed to an invasion. President Biden also was using the term at one point but has since dropped it.

“We don’t want Washington to ever use that word again,” Zaryckyj stressed. “Any boots by the Russians on the ground, any major cyberattack, any attack on our grid, that’s an invasion. I’m sorry, it’s not an intrusion.”

Meanwhile, European leaders, for their part, have not shown enough backbone versus Putin, mainly because they are afraid of losing their access to Russian natural gas, he said.

To which Zaryckyj angrily said, “Sorry, buddy, your heating bills are one thing, but Ukrainian lives are another thing.”

Zaryckyj said the world view of Putin and his cronies is definitely “Orwellian.”

“It’s a fascist form of government,” he said of Russia. “Socialism for the masses. But the elites, if they’re patriotic, they can keep their billions. And that’s basically what the Chinese and Russian model are all about.”

Zaryckyj added the Ukrainians love their own president, Volodymyr Zelenskyy, who is Jewish.

Among the small group listening to Zaryckyj as he expounded on the fraught situation were Iryna Kurowyckyj and Natalka Duma. The two women were close friends of his parents. Kurowyckyj works as a liaison officer at the United Nations.

“Throughout the world, Ukrainians are praying for our country to be happy and free,” she said. “This is the most beautiful country in Europe, the richest country in Europe. And I say Russians lie, lie, lie when they say we are one people. We are not.”

Meanwhile, at the J. Baczynsky East Village Meat Market a few blocks up the avenue, the tension over Ukraine was just as apparent but the store manager, Andrew, had fewer words than the loquacious academic.

“What can I tell you that everyone doesn’t already know?” he said, with a forlorn look. “The situation is tense and sad and nobody is happy about it.”

The latest reports were that Putin had pulled some of his troops back.

“But how far?” he said, skeptically.

However, a couple of days later, it was reported that Putin had, in fact, not withdrawn troops but added 7,000 more of them to the forces surrounding Ukraine.

What if Russia really does invade? the meat market manager was asked.

“Please,” he said, somberly, not wanting to imagine the horrible possibility.

At an emergency rally outside the United Nations on Feb. 17, Zaryckyj read a piece he wrote, “Why Ukraine Matters.” Another mass rally for Ukraine, billed as a “Day of Solidarity,” is planned at the Lincoln Memorial on the Washington Mall on Feb. 20.