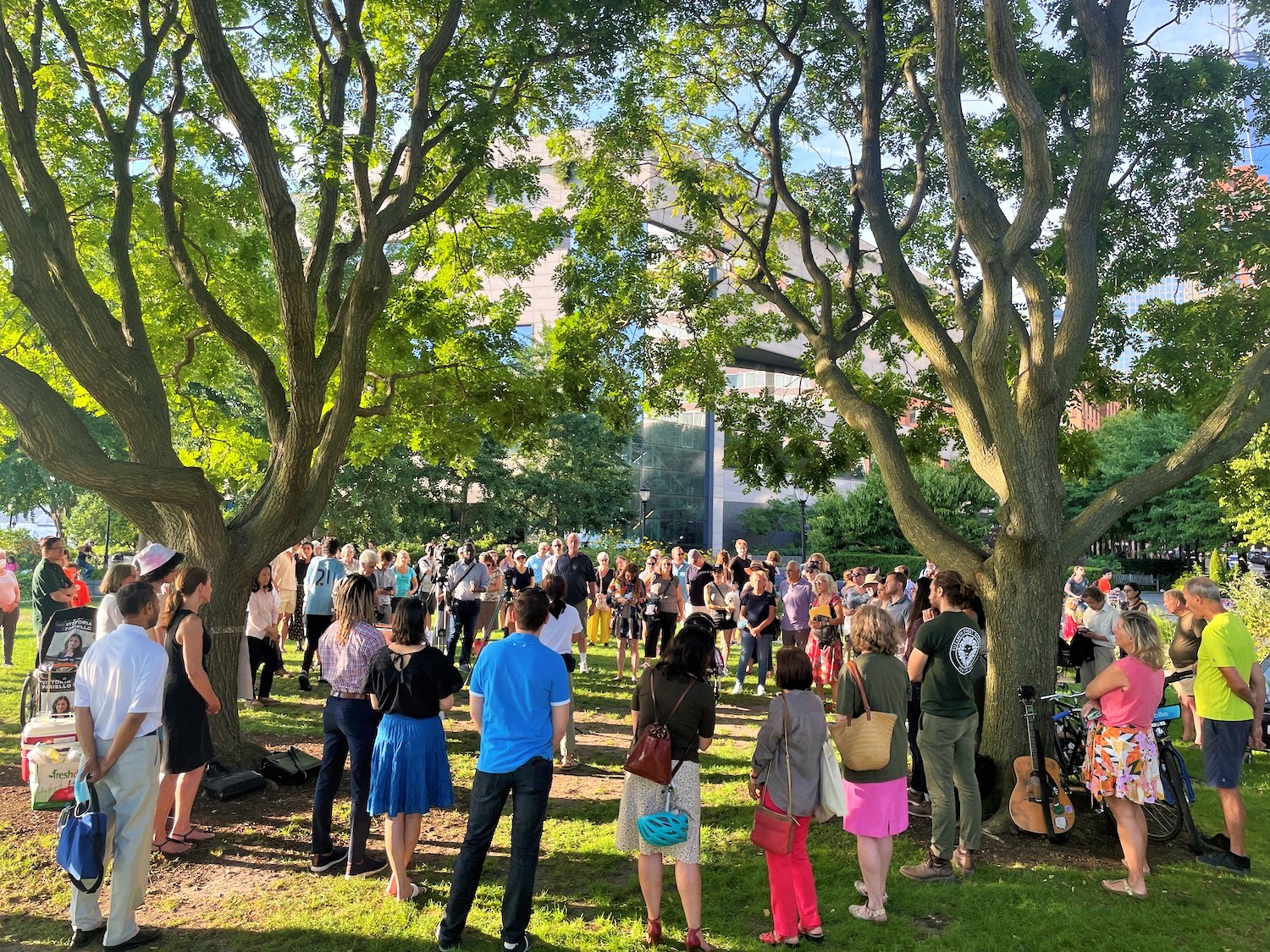 Local residents who rallied in Wagner Park on Aug. 16, above, are still opposed to the Battery Park City Authority's plan to raze and rebuild the park. (Photo by Dashiell Allen)

BY DASHIELL ALLEN | Battery Park City residents and parkgoers rallied on Tuesday in the middle of picturesque Wagner Park — an idyllic strip of green space at the southern tip of Manhattan with breathtaking views of the Statue of Liberty.

They took issue with a coastal resiliency plan to bury the popular park and build it back higher — 10 to 12 feet above its current elevation — to protect against storm surges and sea-level rise. The plan, which is set to break ground after Labor Day weekend, is part of the city’s larger Lower Manhattan Coastal Resiliency initiative.

On the same day, just hours before the rally, the Battery Park City Authority, which oversees the project, announced in a press release major new modifications to its original design for the park’s remake.

The changes, which will result in 12,800 square feet of additional lawn space in the new park — a 74 percent increase from the current design, according to B.P.C.A. — followed requests made in two letters sent by local politicians to the authority last week and reviewed by The Village Sun.

In one letter dated Aug. 9, Councilmember Christopher Marte, state Senator Brian Kavanagh and Manhattan Borough President Mark Levine wrote that they “strongly urge the B.P.C.A. to maximize that space to every extent possible,” also asking the authority to “reexamine the design for the pavilion, and consider options to reduce the size of the building.”

(The rebuilding of the pavilion, which currently houses the Italian restaurant Gigino at Wagner Park, has been another sticking point for residents, who didn’t want to see increased commercial space included in the park.)

Another letter dated Aug. 12, signed by Assemblymember and congressional candidate Yuh-Line Niou and Assemblymember Charles Fall, as well as the neighborhood association’s Erez, made similar requests.

The new park design, according to the B.P.C.A., would also include “the addition of ten more trees to be planted in Wagner Park, for a total net increase of 126 trees compared to the project area today.”

“Throughout the nearly six-year development of the South Battery Park City Resiliency Project, we’ve worked hard to balance the urgency of creating a more resilient Battery Park City and Lower Manhattan with the importance of incorporating community voices,” said B.J. Jones, the B.P.C.A. president and C.E.O., in a statement.

“In keeping with that effort, I’m pleased that we’ve been able to significantly expand lawn space, in addition to other modifications we’ve made over the course of this initiative, without losing momentum to provide critical protection against catastrophic storms,” Jones said.

“My initial reactions are more questions,” Erez said. “We need to make sure that this is just the beginning. It’s a step in the right direction, absolutely, and we would not be here without the community.”

“We like their good-faith effort,” Councilmember Marte, speaking at the rally, said of the authority. Still, he noted, “The community board has been fighting for this for years, and for the authority not to really hear those calls from our board, from its members, is shameful. But they’re here at the table now. … Let’s work with them.”

Tammy Meltzer, the chairperson of Community Board 1, took a positive tone when speaking to The Village Sun.

“Change is change,” she said. “You can’t look at it when it comes. The fact that we’ve gotten change is fantastic.”

Now, with the process to resiliently rebuild the north and west sides of Battery Park City just getting started, she’s hoping that, this time, residents will be engaged from the very beginning.

The rally was also attended by community groups from other parts of Lower Manhattan, such as East River Park ACTION and Elizabeth Street Garden.

“All of us are in the same fight. They’re taking away our open, public green space,” said Fannie Ip, an activist with ERPA who has fought against the contentious East Side Coastal Resiliency plan.

Under E.S.C.R., one half of the nearly 50-acre East River Park has already been completely bulldozed down to nothing but dirt, with the remainder of the park slated for destruction next. As in the Wagner Park project, East River Park will next be built up anew to raise it above the floodplain — for the next few decades, at least.

Joseph Reiver, the executive director of Elizabeth Street Garden, took issue with, as he put it, “green spaces not being prioritized and being pitted against things that are equally as important in many instances.

“But it’s an illusion,” he told the crowd, “and we don’t need to pit these things against each other.”

A number of candidates running in the Aug. 23 Democratic primaries for state Senate and Congress also attended or sent representatives.

“Our representatives should be representing us — they should have us at the table,” said Vittoria Fariello, a Democratic district leader running for state Senate in Lower Manhattan. “And this is a theme throughout our district.”

She’s trying to unseat one of those representatives — state Senator Brian Kavanagh — who wasn’t present.

Another Senate candidate in that race, Danyela Souza Egorov, who noted her children took soccer classes in the area, also spoke, calling for community representation on resiliency projects.

As for Congressional District 10 candidates, both Dan Goldman and Niou sent representatives, while Brian Robinson, who lives in Tribeca, expressed skepticism with the current resiliency plans.

“If we have green-space preservationists pitted against a climate-change initiative,” he said, “we know there’s something way off.”