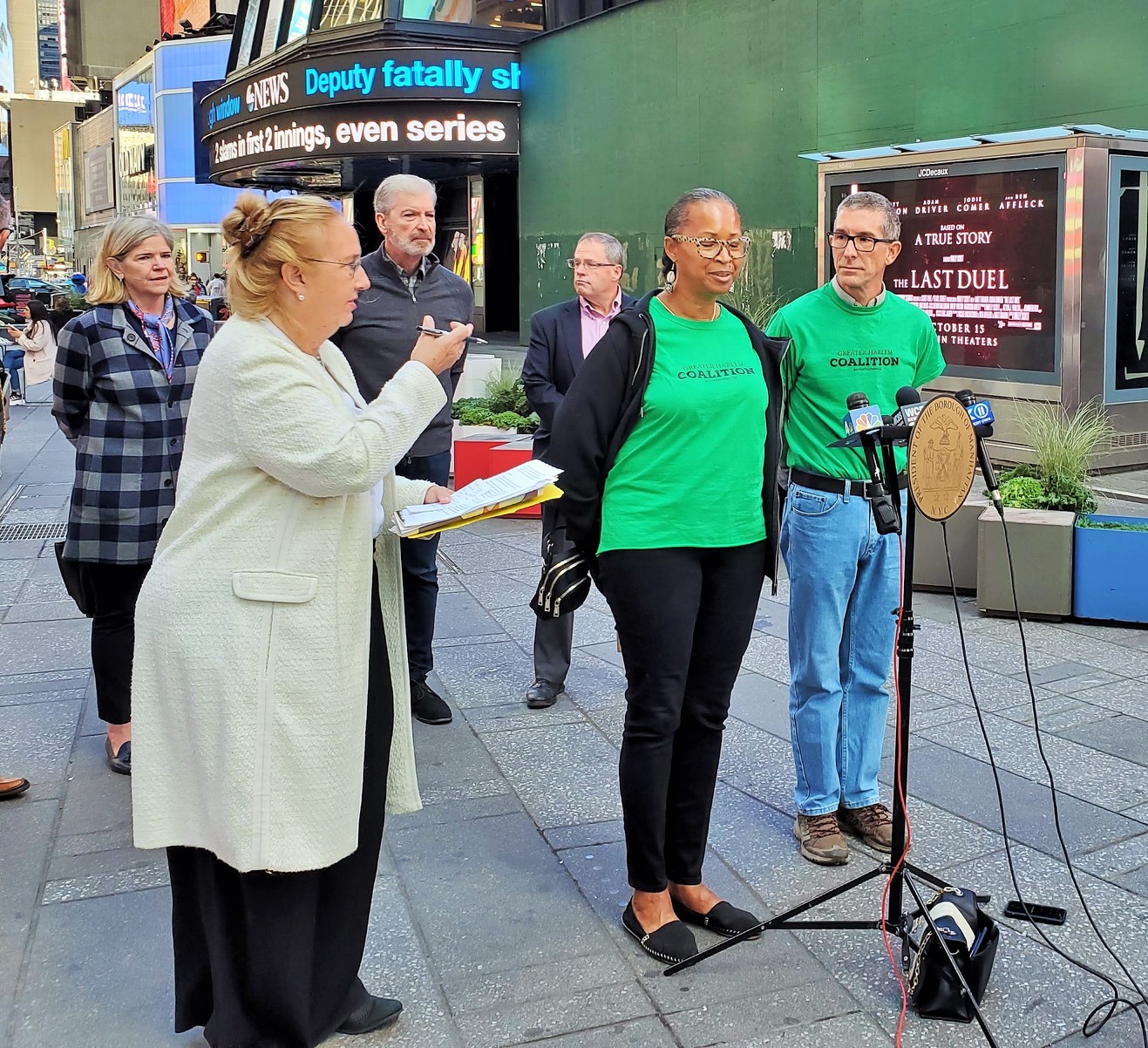 Manhattan Borough President Gale Brewer, left, with members of the Greater Harlem Coalition, at a press conference in Times Square Sunday on addressing drug use on the streets. (Photo by The Village Sun)

B.P. Brewer calls for funds to ‘mitigate challenges’ of drug use in Midtown and Harlem — but not Washington Square Park

BY LINCOLN ANDERSON | Citing Washington Square Park as a model of “some success” in fighting untreated substance abuse, Borough President Gale Brewer is advocating that a windfall from opioid settlements be used to do the same for Midtown and Harlem — plus two other Downtown parks, Tompkins Square and Sara D. Roosevelt.

Apparently, though, Washington Square does not need any extra funding to tackle drug-related issues, in her view.

This past summer, community concern over open drug use in the Greenwich Village landmark park reached new heights. In response, Brewer led an effort to ramp up the presence of social-service and health outreach workers in the historic greensward.

On Sunday, Brewer held a press conference in Times Square, joined by representatives from Midtown and Harlem business improvement districts and community organizations. She said she herself was representing Washington Square Park.

The BID officials and activists said that addicts openly shooting up and sometimes using the streets as a bathroom is bad for their communities, in general, and for tourism, as well. The situation is driving away foot traffic and decreasing public safety, they said.

They suggested that steps like providing 24-hour, staffed public bathrooms — like the successful one at Bryant Park — and daily power washing of sidewalks would go a long way toward improving conditions.

“It’s dangerous, it’s intimidating,” a member of the Grand Central Partnership said of the zonked-out street scene. “This is not the sign of a progressive city.”

Some mention was also made of the effects of the increasing “decriminalization and de-policing” of hard drugs. Earlier this month, Governor Hochul signed legislation decriminalizing the public use and sale of hypodermic needles and syringes.

Earlier this month, Letitia James, the New York State attorney general announced that her office has secured up to $1.5 billion from the Sackler family and other drug manufacturers and distributors for their role in fueling the opioid crisis in New York State. Of that amount, James is allocating $140 million to $256 million to New York City.

Brewer said the next mayor, likely Eric Adams, must have a clear plan on how this money will be used to “mitigate the challenges that substance abuse and these related issues are posing.”

Specifically, she urged that the settlement money should be targeted to Midtown and Uptown — but she notably left out one spot in the borough that is known to be hard hit by drugs, Washington Square Park.

“I write on behalf of two communities in Manhattan that are particularly challenged by public safety issues, including illicit drug use, drug overdoses, public urination and public defecation: Midtown Manhattan and the 125th Street and Park Avenue corridor,” she wrote. “I am requesting that the $140-$256 million allocated by New York State Attorney General Letitia James to the City of New York from opioid settlements be allocated to programs in these communities to mitigate the challenges that substance abuse and these related issues are posing. …

“In Washington Square Park,” she added, “my office has helped to facilitate interagency coordination, community collaboration and information-sharing regarding conditions on the ground through organizing regular meetings with the Parks Department, the New York City Human Resources Administration, the N.Y.P.D., the Manhattan Outreach Consortium, additional social service providers, Manhattan Community Board 2, the Mayor’s Community Affairs Unit and state and elected officials. Together, we have achieved some success in reducing the number of people with untreated substance abuse issues in the park with this model.”

Brewer said some of the opioid cash should also specifically be targeted to Tompkins Square Park and S.D.R. Park. But, again, despite naming those other two Downtown parks, she did not mention Washington Square Park, apparently feeling the drug situation there is now in hand.

“The City must allocate some of the funding it receives from the Opioid Settlement Fund to social service providers who can then take the lead in coordinating the delivery of social services in…Tompkins Square Park and Sara D. Roosevelt Park,” she wrote the three commissioners.

Local residents have long complained about drug activity in Washington Square Park’s northwest corner. Earlier this year, the Parks Department and police decided to close off this area for a period of time, hoping it would help bring the drug situation and related issues under control. Children’s activities and games were even programmed in this area for a while. But the corner has since been reopened.

This past Saturday in the park’s northwest section, the area from the game tables to about three-quarters of the way down the path toward the arch along the park’s northern edge was filled with strung-out-looking individuals. Most of them sat slumped shoulder to shoulder, lining the park’s benches. One man without a shirt lay on his side on the asphalt path in a semi-fetal position. A woman wearing a hockey jersey stood bent over in a stupor, groggily flicking a lighter, seemingly at nothing. No one was playing Chutes and Ladders or Monopoly.

Told about that scene, Brewer said, “I’ll follow up. It’s not O.K.”

She said it had been her understanding that the situation in Washington Square Park had gotten better since, at her behest, Greenwich House and others have been providing social services to this population. The effort — including peer counselling and substance-abuse counselling — is supposed to be ongoing from 6 a.m. to 8 p.m., seven days a week, she said.

At the big police-led meeting about the park at Our Lady of Pomeii Church in June, Brewer announced her plan to have health, social-service and outreach workers in the park on a daily basis.

This past Saturday, though, there didn’t appear to be any outreach workers in the park’s northwest corner when The Village Sun passed through. Three Park Enforcement Patrol officers were in the park — though standing south of the fountain on the outskirts of a crowd enjoying a jam band playing amplified music.

Brewer was the only local politician to attend that June meeting about the state of the park.

Obviously, it’s not illegal to be stoned and sit on a park bench.

“You can sit there,” Brewer said, “but you’re supposed to have help when you sit there.”

As for Sara D. Roosevelt Park, Brewer acknowledged it’s “a problem,” noting there had been “two stabbings” there recently. The day before the press conference, an immigrant Grubhub deliveryman was knifed to death in the Lower East Side park by a mugger who stole his bike.

Meanwhile, Trevor Sumner, the president of the Washington Square Association, when asked for comment on Brewer’s omission of Washington Square, said more funding would help the situation in the park.

“We definitely do not think that illicit drug use and dealing and inebriated people in the park is a solved problem,” he told The Village Sun. “A walk through the park on most days will make that clear to most observers. It’s a long-standing problem that requires long-term thinking and immediate action.

“We are pleased to see and support new programs that have launched that focus on treatment and care, but also want to emphasize the need for more consistent enforcement and presence within the park, as we outlined in our policy recommendations earlier this year,” Sumner said.

“We implore our representatives to take a closer look at Washington Square Park, to allocate significant additional resources in both support and enforcement, and provide better feedback and data on the status, so that we can all be aligned on where we currently stand and the progress we would like to achieve. We plan to reach out so we can be more aligned.”

Regarding the decriminalization of needles and syringes, and whether it will lead to more users shooting up in public, Brewer said “injection sites” are needed and that there already are some in the city.

Meanwhile, the powerful opioid fentanyl, which heroin and other drugs are often laced with nowadays, is causing a nationwide uptick in fatal overdoses.

Asked about how to address the fentanyl crisis, Brewer said, “The idea is to get people to stop from using fentanyl in the first place.”

Fentanyl has been at least partly implicated in the deaths of actor Michael Williams of “The Wire,” Alex Baillie, the bass player for the East Village punk band Leftover Crack, and, most recently, former Devils pro hockey player Jimmy Hayes, among others. Fentanyl is also suspected in the recent death of a prominent Occupy Wall Street activist.