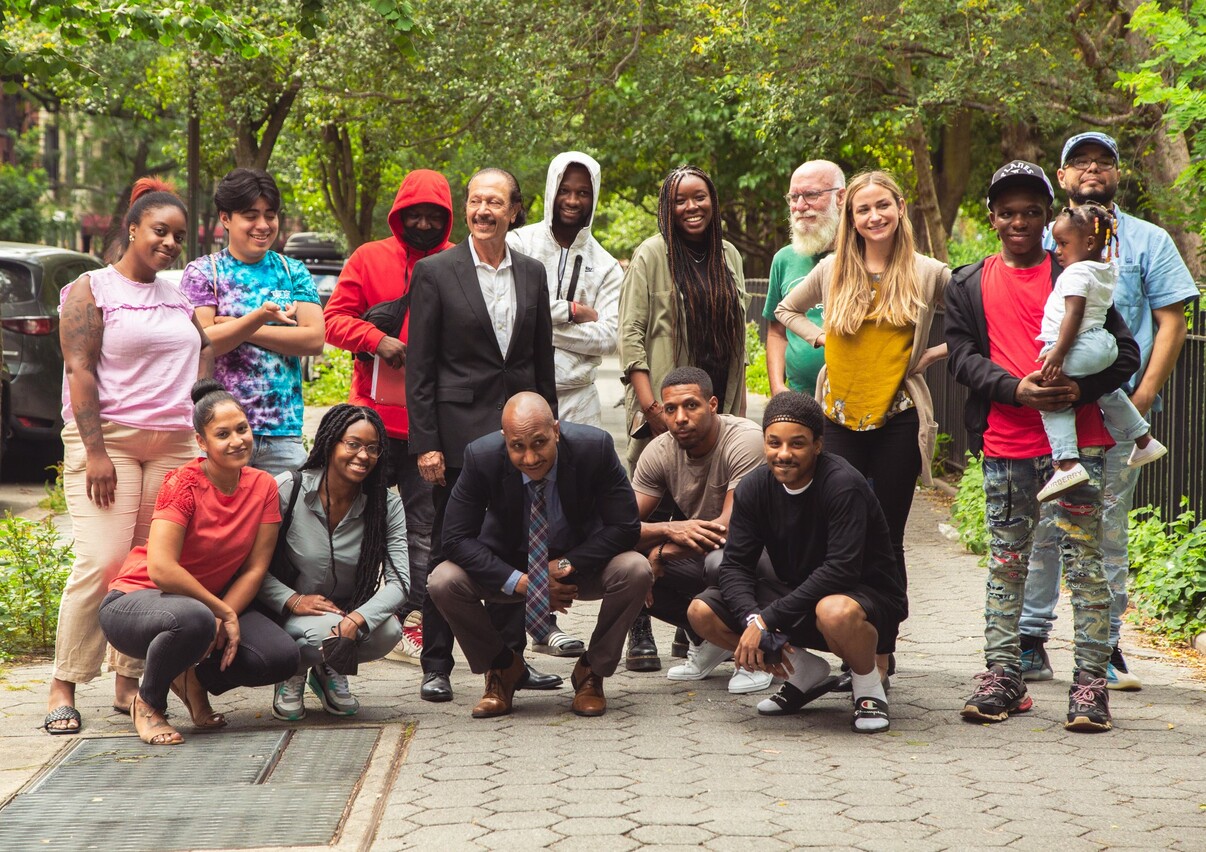 Avenues for Justice court advocates, staff and participants posed for a photo in the East Village near the Robert Siegal Center. (Photo by Andrew Tivon)

BY THE VILLAGE SUN | Manhattan District Attorney Alvin Bragg and local politicians will speak at the dedication of an East Village block as Avenues for Justice Way next month.

The Sat., May 21, event will be held on Avenue B between E. Sixth and Seventh Streets, just off of Tompkins Square Park. Also scheduled to attend will be Assemblymember Harvey Epstein and Councilmembers Carlina Rivera and Gale Brewer, formerly Manhattan borough president.

Politicians and stakeholders will start speaking at 12:15 p.m., before unveiling a new street sign at the northwest corner of E. Sixth Street and Avenue B. The celebration will then continue with food and entertainment until 5 p.m.

The street co-naming is in recognition of the Avenues for Justice / Andrew Glover Youth Program, a nonprofit, alternative-to-incarceration organization with a history of more than 40 years of working with local youth and young adults. The program aims to keep at-risk and court-involved youth ages 13 to 24 out of prison and put them on a path for success.

Community Board 3 and the City Council both gave their unanimous support to the street co-naming.

The roots of Avenues for Justice stretch back to the late 1970s when the Lower East Side, as the East Village was still known back then, was grappling with inadequate community resources. A law student named Robert Siegal and other neighbors came together to provide local youth with a safe space for meals, homework assistance, activities and mentoring.

When Siegal died from an illness, co-founder Angel Rodriguez launched Avenues for Justice in 1979 as one of the first alternative-to-incarceration programs for young people in the country. Up until then it had been known as the Andrew Glover Youth Program. Rodriguez turned an abandoned building at 100 Avenue B near Tompkins Square Park into the program’s flagship community center.

Today the Robert Siegal Center on Avenue B remains an active hub where African American and Hispanic, court-involved and at-risk participants, along with their families, can receive free court advocacy and wholistic wraparound services for job training, mental health services, tutoring and counseling available 24/7.

For more than four decades, Rodriguez has gone on to lead Avenues for Justice — which has its headquarters inside the Manhattan Criminal Courthouse to rapidly respond to young people entering for court appearances.

Avenues for Justice also has a second community center, in East Harlem. The nonprofit offers all court advocacy and wholistic wraparound services on a hybrid platform — online and in person — to New York City’s youth and young adults.

The group’s philosophy is summed up by the social-media hashtag #ServicesNotCells. According to the nonprofit, only 5 percent of its participants are reconvicted of a new crime within three years of enrollment, proving that its services “keep our youth and NYC communities safer than incarceration.”