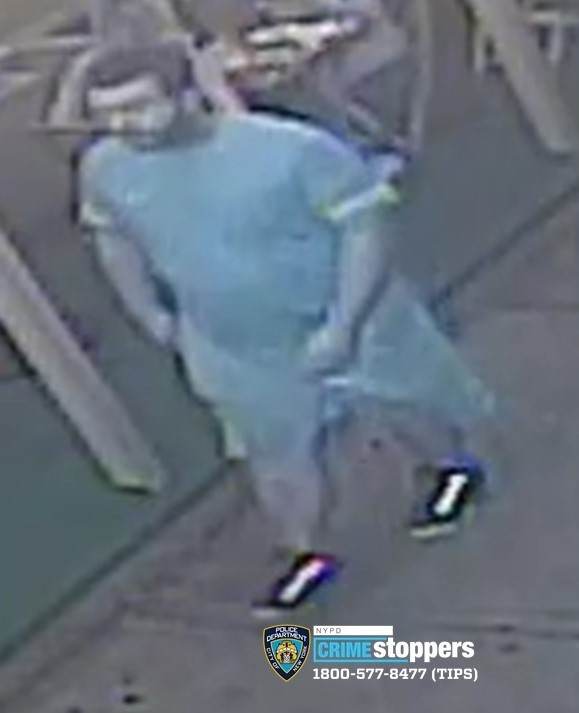 A surveillance-camera image of the attacker. (Courtesy N.Y.P.D.)

BY THE VILLAGE SUN | When will it end?

In yet another disturbing attack on an Asian person, a 68-year-old woman was randomly slugged by a brute in the Little Italy last week, police said.

According to cops, a few minutes past 10 p.m. on Tues., July 27, the senior was “picking up a storage cart” on the sidewalk outside Shu’s Flowers, at 179 Mulberry St., between Broome and Kenmare Sts. A stranger came marching by and, without breaking stride, socked her with a right hook in the right side of her face.

The attacker walked off northbound on Mulberry St., while throwing a glance back over his shoulder at his stunned victim.

The elderly woman refused medical attention at the scene.

Police released photos and videos of the incident. The suspect has a stocky build, sported short dark hair and a short beard, and wore a dark-blue short-sleeve T-shirt with white bands at the sleeves’ ends, light-blue knee-length shorts and dark sneakers.

A police spokesperson said that, as of now, the incident is not being classified as a hate crime since there were “no statements made” by the perpetrator.

It was not immediately clear what the victim was doing at the time of the assault or if she was an employee of the shop. The spokesperson said she was “picking up garbage.”