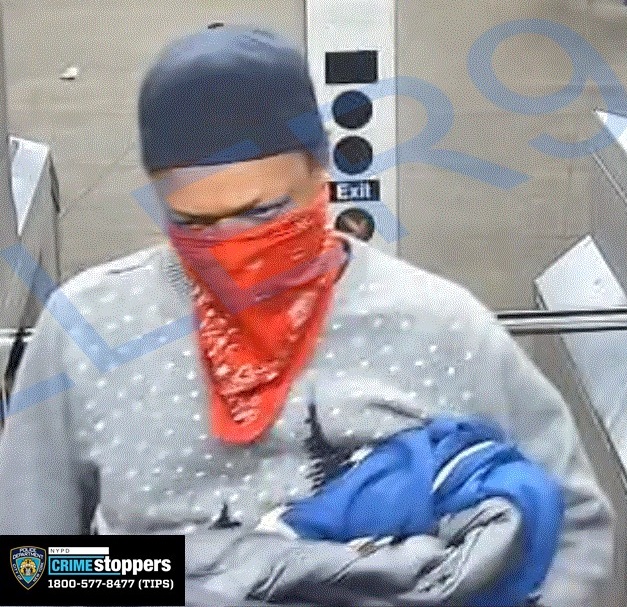 Police say this man is wanted in connection with a hate-crime assault at the East Broadway subway station. (Courtesy N.Y.P.D.)

Police said a thug punched out an Asian man at a Lower East Side subway station on Tues., March 2, in what they are calling a hate crime.

According to cops, around 8:50 p.m., the suspect reportedly attacked the victim, a 56-year-old Asian man, by slugging him in the face, knocking him unconscious, as he was entering the F station at East Broadway and Rutgers St.

E.M.S. medics responded and transported the victim to an area hospital for treatment of a cut to his lip, a black eye and swelling to his head.

Police released a surveillance photo and video of the alleged suspect. He wore a red bandana over his mouth, a backwards black baseball cap, a gray long-sleeved shirt, black pants and white shoes.

Police ask that anyone with information call the N.Y.P.D.’s Crime Stoppers Hotline at 1-800-577-TIPS (8477) or for Spanish, 1-888-57-PISTA (74782). Tips can also be submitted on the Crime Stoppers Web site at WWW.NYPDCRIMESTOPPERS.COM or  on Twitter at @NYPDTips. All tips are strictly confidential.