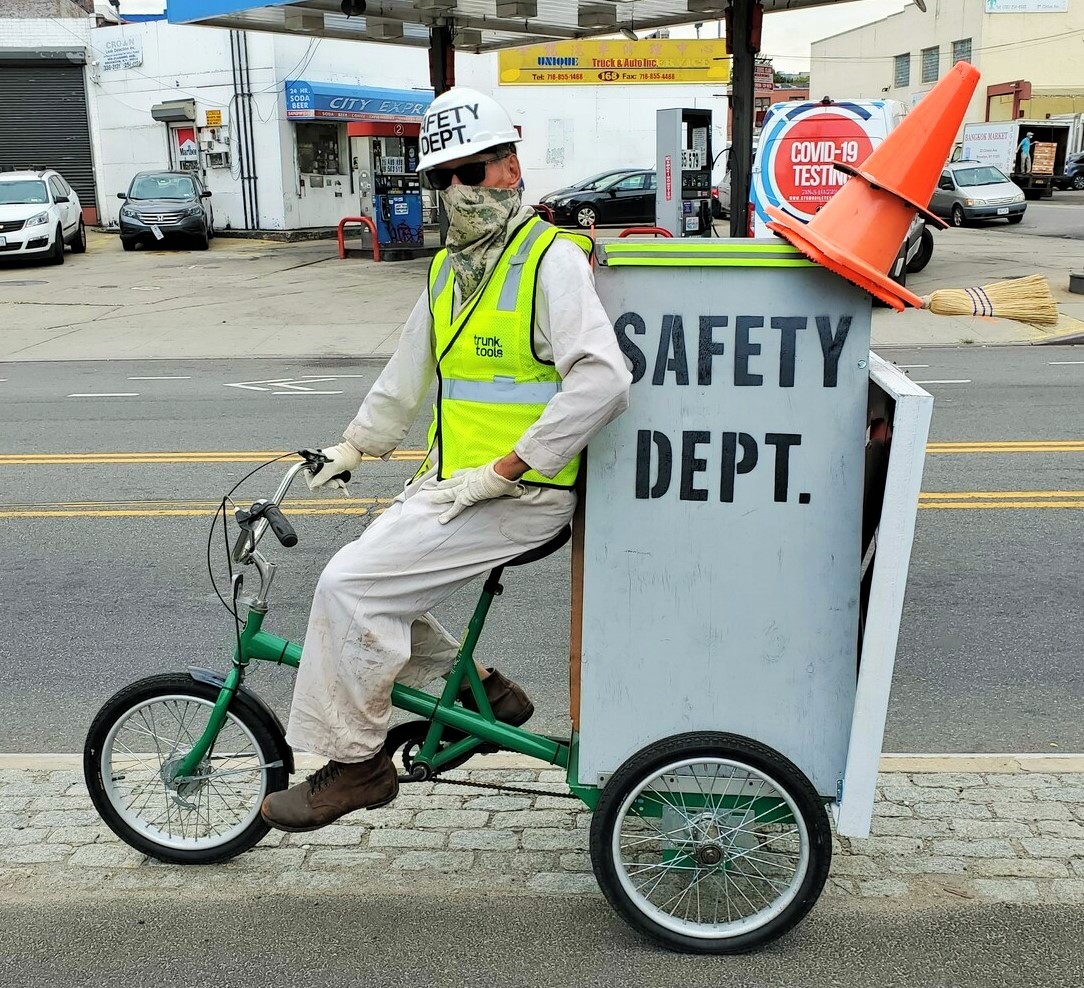 The anonymous street artist is ready to roll out his bike-lane stencil campaign. (Photo by The Village Sun)

BY LINCOLN ANDERSON | You might see him out on the bike paths — but he doesn’t want you to know who he is.

All you need to know, though, is this: He’s steaming mad about illegal mopeds, scooters, motorcycles and souped-up e-bikes zooming through the city’s bike lanes, and he’s got something to say about it — make that spray about it.

Like Zorro, he wears a mask. But instead of a sword, he’ll be wielding — a stencil.

In short, he’s trying to keep the city’s bike paths from permanently becoming a chaotic, speed-crazed scene like something out of “The Road Warrior.”

“I am an anonymous street artist who’s had enough and has decided to take matters into his own hands and do the city government’s job,” he told The Village Sun. “Why haven’t they done one sign on the bridge or on the bike path?” he asked in frustration.

The street artist spoke to the newspaper on strict condition of anonymity, saying he fears for his safety as a result of the campaign he’s about to launch.

“There’s not even one sign that says, ‘No Mopeds on the Bike Path,'” he complained. On the other hand, he noted, Hudson River Park, which is run by a state-city authority, does have signs saying mopeds aren’t allowed on the bike path — “and they enforce it.”

(The city’s Byzantine rules for “Electric Bicycles and More,” although seemingly rarely enforced, are posted on the Department of Transportation’s Web site; they state that mopeds — a.k.a. “limited use motorcycles” — are not allowed on bike paths — but that e-bikes and low-speed electric scooters are. The Web page, however, confusingly seems to set two different speed limits for e-scooters: 15 m.p.h. and 30 m.p.h.)

Trying to cut through the confusion and restore a semblance of safety and order on the bike paths, the artist has created his own “No Mopeds/Motorcycles” stencil, which he said he plans to spray onto “green bike paths…two-way, divided bike paths.”

The Village Sun spoke to the masked man on Wed., Aug. 17. He said he might start stenciling as soon as the next day. He plans to paint 100 of the images in Lower Manhattan, as well as in Brooklyn — he mentioned Clinton Hill and Sunset Park.

He’ll also be focusing his righteous spray rage, in particular, on the East River bridges. He dubbed these “the extreme danger zone” due to the way motorized, two-wheeled riders zip perilously around cyclists when they make passing moves on the bridge bike paths — especially on the Manhattan Bridge, which has a particularly narrow bike path.

Along with a mask, he’ll be wearing a “Safety Department” outfit, complete with a hardhat, white coveralls and neon, reflective vest. He’s rigged up an adult tricycle with a signboard in back that also sports the name of the made-up city agency.

Everything’s “ready to roll,” literally — except for one technical challenge: The coveralls are hellish to wear in mid-August.

“This is really hot,” he said of the outfit, though adding, “I can go out for at least an hour and do it.”

The artist is outraged that the city is simply looking the other way, allowing an explosion of electric and gas-powered vehicles to ride roughshod over bike lanes that cycling advocates, over decades, struggled and fought to create.

The situation is fast getting out of hand. Earlier this month, the New York Post took a speed gun out onto the bike paths, including onto the bridges, and found that more than one-third of “motorbikes” using them were speeding above the 25-mile-per-hour limit, with some whizzing by as fast as 35 miles per hour.

The anonymous artist has some sensible solutions to combat the motorized mayhem.

“The way to stop this is at the bridge — because you cannot chase them,” he said of the moped, scooter and motorcycle scofflaws. “I saw police try to catch one guy. He went 50 miles per hour. He turned and went the other way against traffic. On the bridge [though], it’s really easy to catch them.”

The artist, a former East Villager, recalled that the notorious Hell’s Angels motorcycle gang, who used to have a clubhouse on E. Third Street, at least followed traffic laws with their “hogs.”

“They were legitimate,” he said. “They had papers, license plates. They waited at [traffic] lights.”

The rules are very simple, he said: “If you want to go in a bike lane, you have to use an e-bike with pedals. The [scooter and moped] dealers are telling people you can ride in these things with no license, no plates. It’s illegal to have a moped without plates and pedals that goes over 20 miles per hour.

“Our city is in a state of denial,” he lamented of the bike path pandemonium. “It’s ruining the entire idea of biking — which is [supposed to be] calming traffic. It’s just really embarrassing for this mayor, because he campaigned on law enforcement.”

The activist offered a sad slogan to sum up the situation: “From Vision Zero to Zero Enforcement.”

“I think it’s that during the pandemic, these guys were considered heroes,” he offered of the rogue riders, adding, “It’s the arrogance of the technology — you can get away [from enforcement].

The artist plans to sit on his bike on the Manhattan side of the Manhattan Bridge and hand out fliers and also count the illegal vehicles using the bike path.

“It’s not a big deal,” he shrugged of solving the problem. “You shut down the dealers, you stop them at the bridges and you tell them where to get an e-bike — and the mayor and the police would look like heroes.”

The tickets for illegally riding in a bike lane are $500, according to the artist. More to the point, the illegal scooters, mopeds and such should simply be confiscated, he argued.

The street artists’ stencils will be impossible not to notice. He also plans to post signs along the sides of the bike paths with the same image.

“It’s very clear. It’s ugly,” he said of the image. “They should have that at the entrance of every bridge. Most of these guys don’t speak English — the signs and stencils will work.”

After allowing a few weeks for the new stencils to have an impact, the street artist will then launch phase two of his campaign. For that, he’ll create a different persona — maybe something like a “town crier,” he mused — and will ride his trike around City Hall and police precinct stationhouses. The trike will sport large signs saying, “A Moped or Scooter With No Pedals or Plate is Against the Law in New York State Unless Max Speed 20 m.p.h.” and “The Motorcycle Menace — Fine the Dealers — Impound the Machines.”

He also has visions of the thumbs-down becoming a universal signal that cyclists flash at illegal moped riders on the paths. He’s even considering creating T-shirts with the gesture that pedalers can don to hammer home the message.

After interviewing the anonymous street artist, this reporter biked home via one of the East River bridge bike paths. Nearing the end of the bridge, he heard an extremely loud roar and, at first, figured it was just traffic noise from the bridge. It turned out to be a young guy on a dirt bike — which are illegal to ride on New York City’s streets — who tailgated him, while impatiently, loudly revving his engine, all the way to the end of the bridge. Apparently, he didn’t want to try a passing move on the tricky, blind-spot curves at the end of the bridge path.

As the Post reported, when he was campaigning last year, Adams said the city needed to crack down on dirt bikes, ATVs and other illegal vehicles — including by more effectively employing speed cameras and police to catch speeders using them. The mayor has since periodically posed for photo-ops with piles of confiscated dirt bikes and ATVs being crushed. However, the larger issue, many would say, of illegal scooters, mopeds, motorcycles and extra-fast e-bikes in bicycle lanes — that were intended, at least originally, for pedalers — persists.