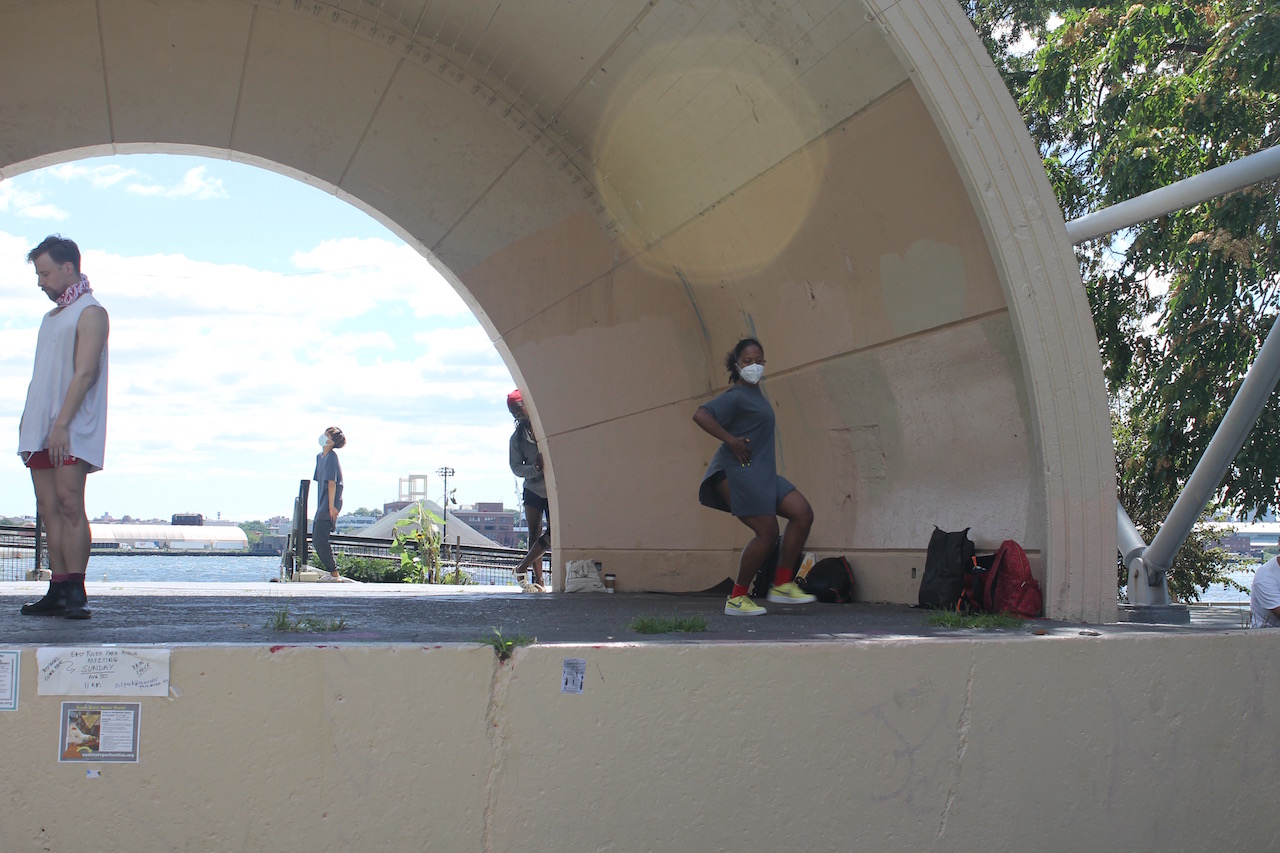 Dancers were rehearsing at the East River Park amphitheater in late August when local activists gathered in the seating there to strategize on how to save the park from being demolished for the East Side Coastal Resiliency project. (Photo by The Village Sun)

BY BARBARA KAHN | On the heels of the upcoming irrevocably altered East River Park on the Lower East Side, a distant memory came to mind.

I was an emergency cast replacement in a production of “Oedipus Rex,” the ancient Greek tragedy by Sophocles, being presented at the East River Park Amphitheater. It was a small role that I would perform for the two remaining performances.

The director was from Germany and had invited lots of wealthy patrons to see her production and hopefully jump-start her career in New York City. At the single rehearsal in her home in Queens, she told me that she had hired guards to keep out the neighborhood kids. The kids had thrown stones at the stage during the previous performances.

I arrived early for my first performance and sat in the empty audience, relaxing with a cigarette. (I was a heavy smoker then). A little boy, maybe 10, was on the other side of the fence and asked me for a cigarette. I thought either he’ll smoke it or sell it, so what the hell? I gave him one. He didn’t light it or ask for a match. He also asked what was going on.

I told him about the play, emphasizing the plot and the costumes that I hoped would spark his interest. Well, he went home, got some of his friends, and they each brought an accompanying adult — some still wearing kitchen aprons or with hair in curlers — so they could get past the guards. A couple of limos brought some of the wealthy invitees.

During the performance, there was a low-level buzzing sound from the audience. I realized it was all the little kids translating the play into Spanish for their mothers or grandmothers. Later, I recommended to the director that she add a synopsis in Spanish in the printed program and let the locals in. They were probably throwing stones because they had been barred from the theater, their theater, the night before. The director refused, using a racist expletive I don’t need to repeat.

I was happy that we were rained out the second and final night.

Kahn is an award-winning playwright, director, actor and coach, based in New York City. Theater for the New City has been the primary New York City home for her plays since 1994.