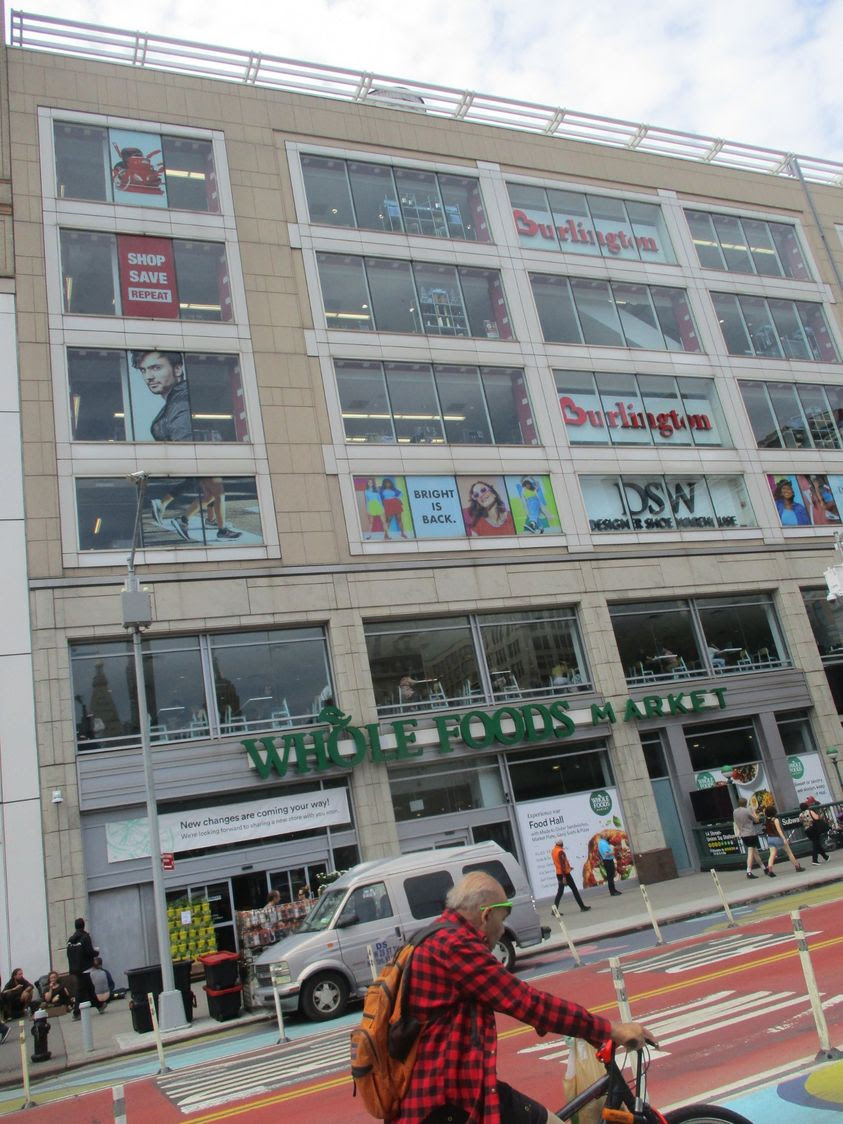 BY MARY REINHOLZ | Whole Foods Market at 4 Union Square South has been a fixture in this Downtown neighborhood since 2005, long before Amazon.com, Inc. acquired it and nearly 500 other Whole Foods organic grocery stores across the U.S., Canada and the U.K. for $13.7 billion in 2017.

These days, signs outside the chain’s E. 14th Street branch have been announcing “new changes” via a banner above its ground-floor entrance, telling customers it’s “looking forward to sharing a new store with you soon.”

That new edifice is a 54,000-square-foot Whole Foods store at 63 Madison Ave. that opened June 1. The immense E. 27th Street foodie establishment includes a restaurant and bar, along with a reported 1,000 new products from “local” suppliers. It’s minutes from the Fifth Avenue apartment building of Amazon founder Jeff Bezos, the entrepreneur and space traveler anointed by Forbes the second wealthiest person on the planet, whose online company is the second largest employer in the U.S.

Bezos, 58, is regarded by some labor-rights activists and progressive politicians, like Bernie Sanders, as a slave driver and union buster. But there was little obvious sturm and drang over parent Amazon observed by The Village Sun last week at the Union Square Whole Foods store. Its standup street sign alerted patrons to the new third-floor food hall, a reconfigured  space that now offers “expanded grab and go” entrees, ready-made sandwiches and bars for sushi, pizza, soups, cheeses and charcuterie, along with a full-service coffee station and cafe seating with sweeping views of Union Square Park, plus a self-service checkout.

“We’ve been here for two months — but we’re from the outside [not employees],” said an Asian chef at the third-floor Genji Sushi bar when asked by The Village Sun if he would join the new Amazon workers union.

“We don’t talk about [company] money around here,” said an on-site customer service specialist in a telephone conversation with this reporter. Another staffer said the expansion was basically a “renovation” of the third-floor space, with employees bringing units from downstairs to the upper level.

Even so, Lucia Albero, a Whole Foods representative at its regional corporate office in New Jersey, claimed bizarrely that the food hall constituted an expansion of the store by “more than 11,000 square feet.” She did not respond to other questions about the store sent her via e-mail. The Berlin Rosen P.R. operative who referred Albero to this reporter and requested a list of questions provided no information whatsoever: “We do not fact-check or provide answers to these questions,” she said in an e-mail.

According to published reports, the new food hall at Union Square comes at a time when Amazon recently announced it would close six Whole Foods stores in four states (not New York) and other underperforming brick-and-mortar Amazon properties after acknowledging a financial loss for the first quarter of 2022, its largest pullback since 2015.

Amazon accounts for 2.4 percent of the U.S. grocery market, most of that coming from the Whole Foods chain it owns.

“That number could be misleading,” opined top ranked retail analyst Scott Mushkin, C.E.O. of K5 Capitol in New Canaan, Connecticut, and head of its research department. “It does not take into account [Whole Foods] online sales.”

Mushkin acknowledged that Whole Foods Market — founded as a small vegetarian store known as Safer Way by John Mackey in Austin, Texas, in 1980 — was first known as a hippie grocer. While it draws “a much larger audience” these days, he claims that the eco-conscious chain “has pretty much stayed true to its foundations, its standards and concern for animal welfare.”

Mushkin noted that Mackey, who calls himself a “conscious capitalist,” created a paradigm shift in the industry with the chain’s higher wages for employees.

“Is it is perfect?” he said. “No, but if you really want good organic foods, it’s pretty unique.”

A sign inside the Union Square store’s ground-floor level announces openings for new employees at a starting wage of $17 an hour. Another in the food hall states: “Our mission is to nourish people and the planet.”

Gabriel Morales, executive director of Brandworkers in Long Island City, said his group represents employees for food manufacturers not groceries. But he said many Whole Foods workers in New York have called him in recent years, complaining that they feel “scrutinized” and “spied on” by bosses and fearful of termination if they express pro-union sentiments. He noted reports that Amazon sent Whole Foods managers a “hot map” designating stores favoring organized labor.

“It’s despicable,” Morales said of Amazon’s aggressive efforts to stave off collective bargaining. “People have a right to join a union and have a voice [in their employment].”

In 2018, Senator Bernie Sanders denounced Jeff Bezos and Amazon for profiting from the COVID lockdowns while nonunion employees, he claimed, were paid low wages and surviving on food stamps and Medicaid. (He later congratulated Bezos for raising Amazon’s minimum wage for workers to $15 an hour.)

Early last month, Sanders, presiding at a hearing of the Senate Budget Committee he heads, said the e-commerce behemoth and “companies like Amazon” should not receive more federal contracts because of their purported violations of labor laws.

A cashier on the ground level at the Union Square Whole Foods shook her head when The Village Sun asked her if she would join a union.

“That was discussed during our employment,” she said with a wry smile. “We’re not supposed to talk about it.”