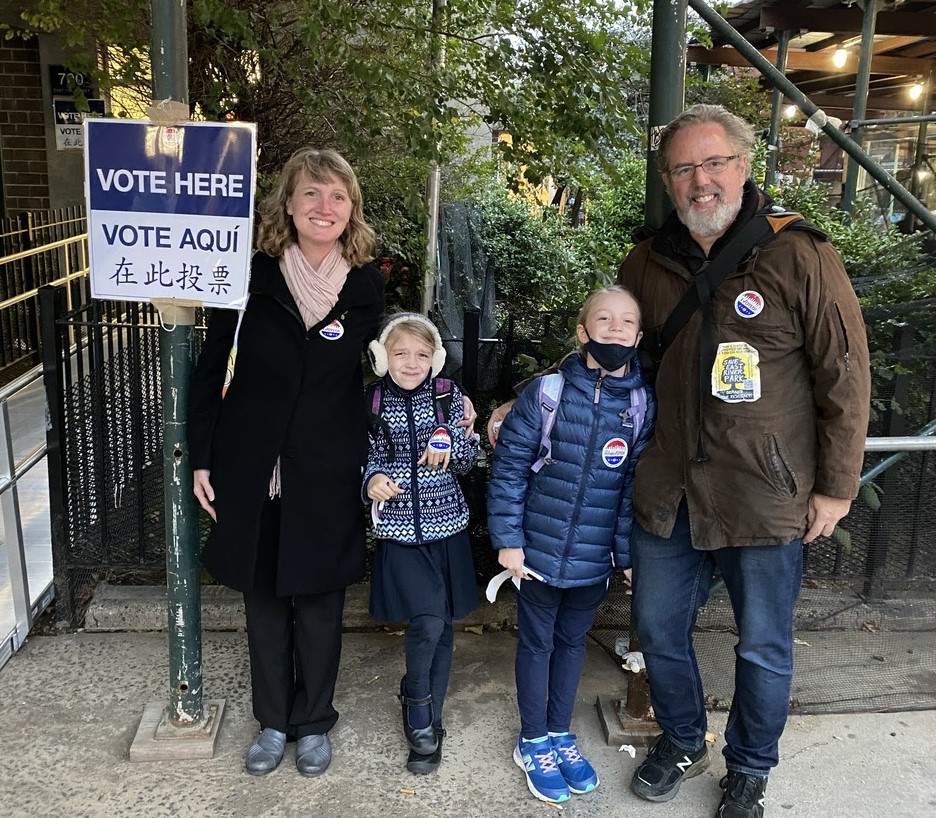 Allie Ryan, her husband, Chris, and their daughters at their poll site in the East Village on Election Day. (Courtesy Allie Ryan)

BY THE VILLAGE SUN | Allie Ryan lost the election for City Council District 2, but she’s not giving up the fight.

In an e-mail thanking her supporters on Thursday, Ryan declared, “We ran an amazing campaign.”

But she assured that her journey into political activism is “far from over.”

“Unfortunately,” she said, “we could not overcome the reality of being part of a mayoral election year where most people simply vote the party line, ‘darkening the oval’ of the recent Democratic Party primaries.”

Ryan skipped the Democratic primary election, choosing instead to run as an independent in the general election. Ryan was required to create her own ballot line, dubbing it the Neighborhood Party. She said she now is considering creating a Neighborhood Party Coalition to continue advocating on the issues she championed in her campaign.

For one, she said she definitely intends to keep battling to save East River Park from destruction under the city’s East Side Coastal Resiliency plan. Saving the 60-acre waterfront green oasis was her top campaign issue and what compelled her to run for office in the first place.

“I will continue to voice my dissent and the truth about the clearly unnecessarily destructive East Side Coastal Resiliency project and call for a modified version of the [earlier] community-led plan and interim flood protection that will SAVE EAST RIVER PARK!” she wrote.

Ryan was arrested the day before the election for doing civil disobedience in East River Park to stop the beginning of demolition of the tennis courts, the opening move in the city’s planned destruction of the park.

Ryan’s e-mail included a video of the “Ryan Family Band” performing “We Will Save the Park, Save the Trees” to the tune of Queen’s “We Will Rock You.”

As her husband, Chris Ryan, plays the drums, their daughter Virginia sings, “Buddy, you’re an old tree, strong tree / Please, Carlina, don’t cut me down / You’ll get blood on your hands / If you ruin this land.”

“Unlike the tone-deaf nonsense that we hear in our city councilmember’s ‘victory statement,’ I stand firm that we need real leadership that puts our community first,” Ryan said. “I am examining my many options, some suggestions, offers and tackling some upcoming commitments.”

She said she and her proposed Neighborhood Party Coalition will pressure Rivera to address local issues, including “the decrease of quality of life,” “poorly designed and implemented bike lanes” the need for “better prep” for the looming partial closure of East River Park, the homeless crisis and the “restaurant sheds sanitary and noise crisis” — adding of the latter that “a real public discourse about public space” is needed.

Ryan said she plans to advocate for an oversight hearing about the homeless situation in Council District 2. Specifically, she said she would like to see Rivera commission a “homeless impact study” for the Kips Bay neighborhood, which includes the 30th Street Men’s Shelter.

In addition, Ryan is proposing a program to incentivize solar panels to displace and “end rooftop parties.”

She also wants to “pause” the city’s Uniform Land Use Procedure (ULURP) for new projects, and “examine the recent growth of upzonings and market-rate housing.”

In that vein, Ryan said she is planning to testify on the morning of Tues., Nov. 9, against the Soho/Noho rezoning plan at the City Council’s Subcommittee on Zoning and Franchises meeting.